This week is a quick review of another top from Vixen by Micheline Pitt, the “Bawdy” crop top. Here are links to my previous Vixen reviews:

I never got around to reviewing them, but I’ve also tried the Vixen “Babydoll” full-length top and the “Dollface” dress. Part of why I didn’t bother to review them is because they’re not boob-friendly. I did, however, take photos of them, so I can give some detail now.

The cups of the Babydoll are shallow and short and the sleeves are wide. I had more visible cleavage than I was comfortable with for a casual top and my bra straps would not stay hidden in back. 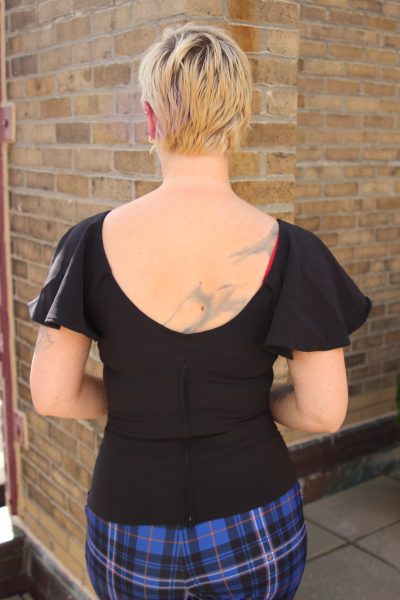 The Dollface also didn’t have enough projection or height in the cups, so there was a lot of cleavage and even some quad-boob. It has adjustable straps so you can bring the neckline up, but that has its limits. I could only make the straps so short before the fabric would dig into my armpits. As well, the higher the neckline went, the worse the quad-boob was. And with my super long torso, shortening the straps also raised the waist too high.

Considering how successful the Vacation dress and other separates were despite these two failures, I’ve been eager to try other Vixen pieces that might work better for me. The Bawdy tops didn’t stand out at first, but when Vixen had a 35% off Black Friday sale, I took a second look.

In one a Facebook fan group, I searched through photos of real customers wearing the top to get an idea of how it might fit. Some of them had loads of cleavage while others looked totally work appropriate. I asked the group for advice too, but ultimately ended up buying both size medium and large with plans to return whatever size didn’t work. I ended up keeping the medium, and here are my photos: 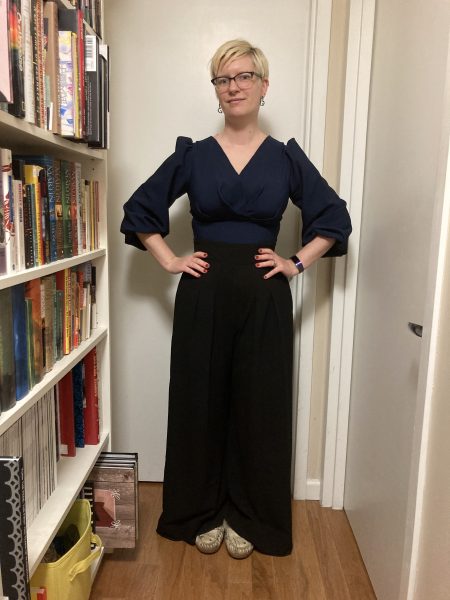 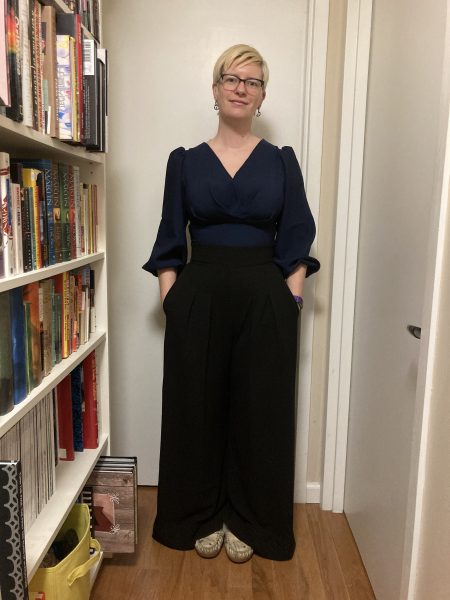 The Bawdy top has puff shoulders, elasticated peasant sleeves, and a crossover V-neck with two pleats on each cup. Those pleats make allllll the difference! There is finally enough projection to fit my boobs.

This top seems to be made of the same fabric as the Vacation dress, which has a slightly “sticky” feel to it, if that makes sense. As such, the fabric that crosses over itself stays in place really well. You can pull the neckline wider and open up the cleavage, or you can tuck each side into itself at the center and it completely stays put (and keeps you covered). Here are closeups of the neckline both fully covered and more open: 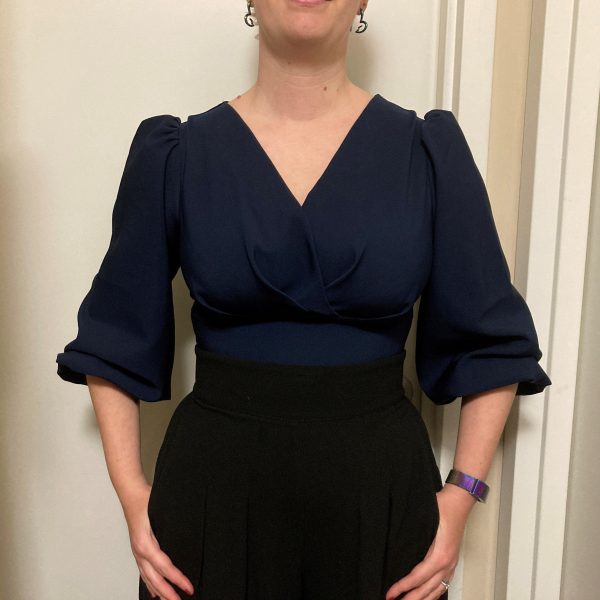 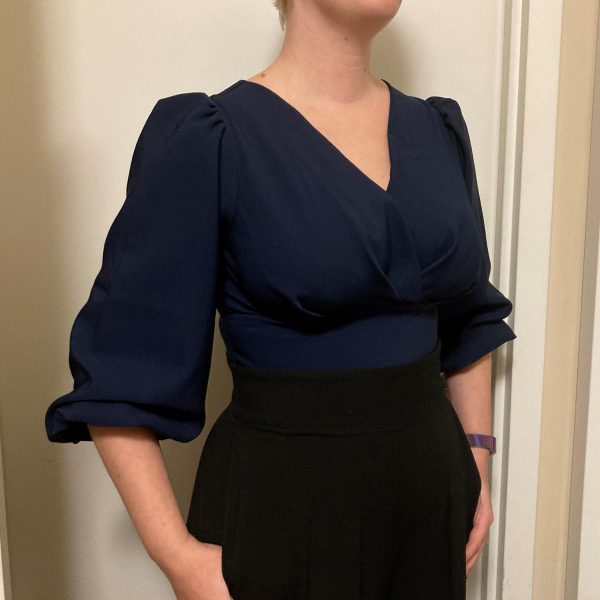 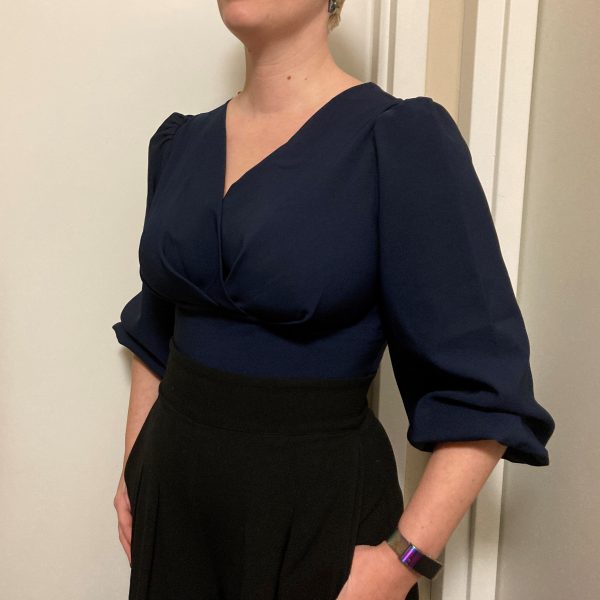 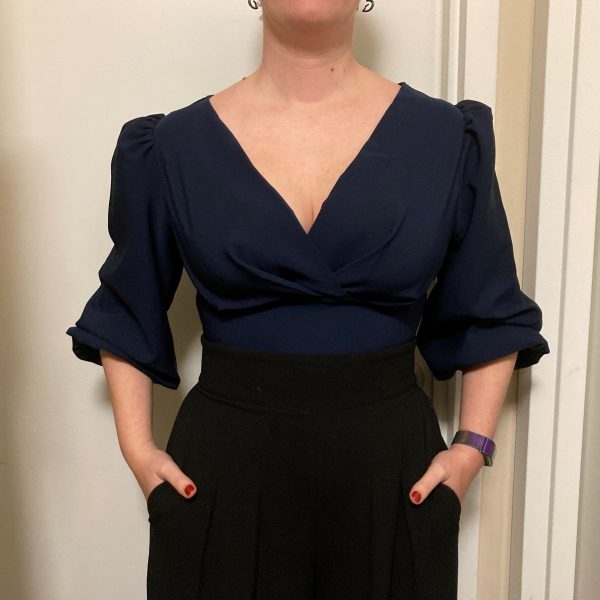 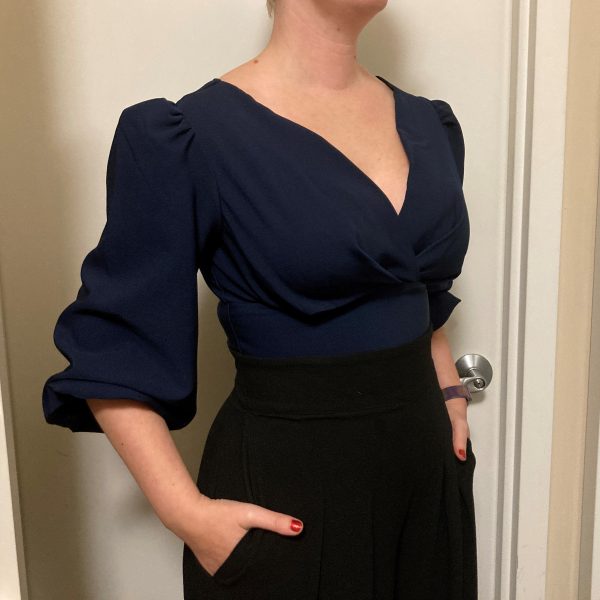 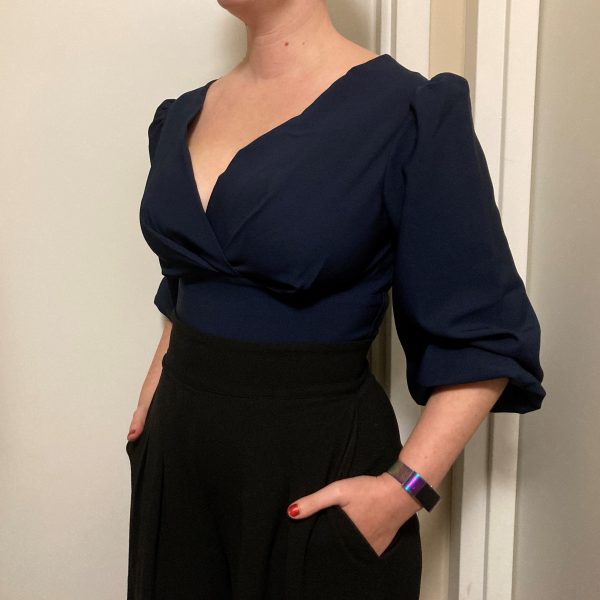 The underbust seam is just a little bit high. It’s technically resting on breast tissue, but it’s basically not noticeable. The elastic at the ends of the sleeves allows you to wear them at different heights along your arms. I like it with the elastic in the crook of my elbow. It’s about “bracelet” length when fully extended. Here’s a photo of the full length that also shows the volume, which is (thankfully) not overwhelming or costume-y: 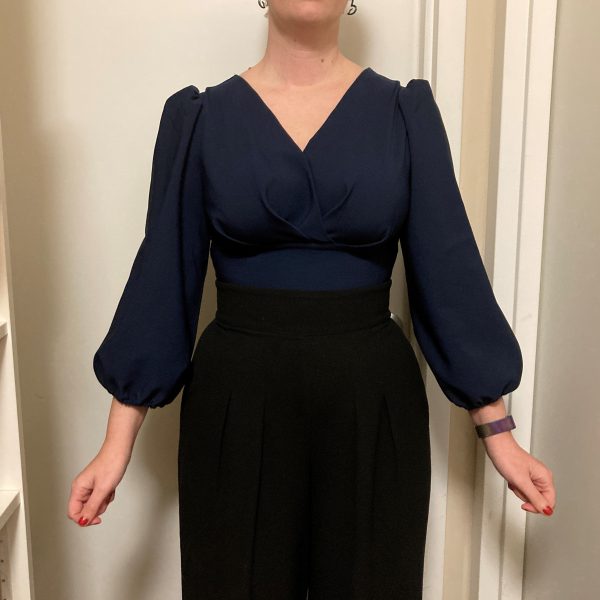 Finally, let’s talk length. This is a crop top, after all. I actually asked Vixen if there are plans to release a full-length version in the future and the answer was no, because they just released a Bawdy dress. (Not sure what a dress has to do with a shirt…I want to wear this top with pants!).

Anyhow, it’s not that short for a crop top, but on my long torso, it only overlaps with my highest of high-waist pants by about an inch. Because of my proportions, half the “high-waist” pants I own actually hit me in more of a “mid-rise” placement and do not work with these short tops. Even with the Doris pants you see here, the front stayed tucked in, but the back popped out with enough movement. 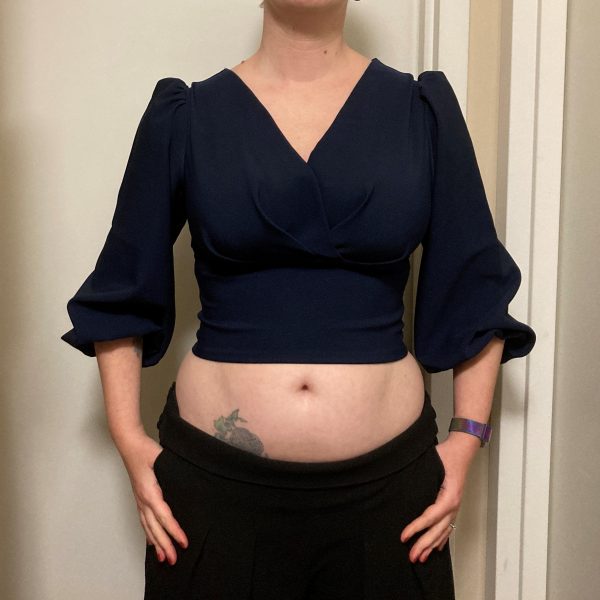 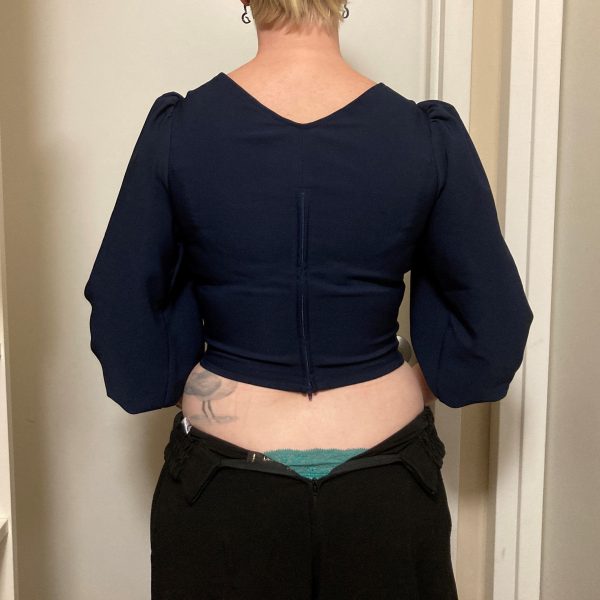 Lastly, the reasons I decided to keep the medium instead of the size large: While the large provided a wee bit more bust room, the underbust seam wasn’t really an improvement. And it stays in place under my bust better when it’s pulled tighter. As well, the shoulders of the medium felt just slightly more comfortable. Finally, the tighter ribcage of the medium seems to stay in place better (there’s that “sticky” factor I mentioned earlier), which is a concern since I need this top to remain tucked in.

The medium ribcage fits snug while the large skims over my body. So if you have a fuller bust than me with a comparable waist, then I think you would be just fine in size large. Or a busty lady of any dimension should be able to safely size up for more bust space without losing definition in the waist, since the difference from one size to the next was basically invisible to the naked eye.