After my last post garnered a comment asking for more reviews of curve-friendly pants, I went through my drawers and realized I had several pairs of pants and shorts that I’ve never reviewed and are still available for sale. This week, I’m featuring the black capri pants and “Lolita” top from the brand Vixen by Micheline Pitt.

I previously reviewed the “Vacation” dress and the “Powderpuff” top from Vixen. I complained a bit in the dress review about how so many of the Vixen items show off a ton of cleavage, but there are still some gems to be found with this brand—and the capris are definitely one of them!

I measure 38”-29/30”-42” and height 5’6” with bra size UK 28GG/30G. Since I’m working from home these days, I’ve almost entirely stopped wearing wired bras, and in these photos I’ve got on the Sugar Candy fuller bust seamless bra in size small. The Vixen top and capris are size medium. 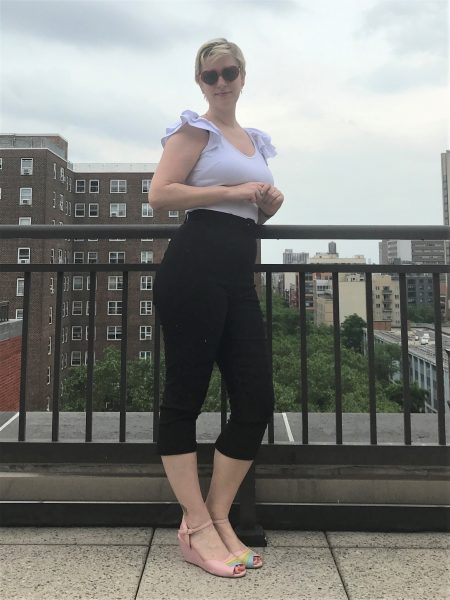 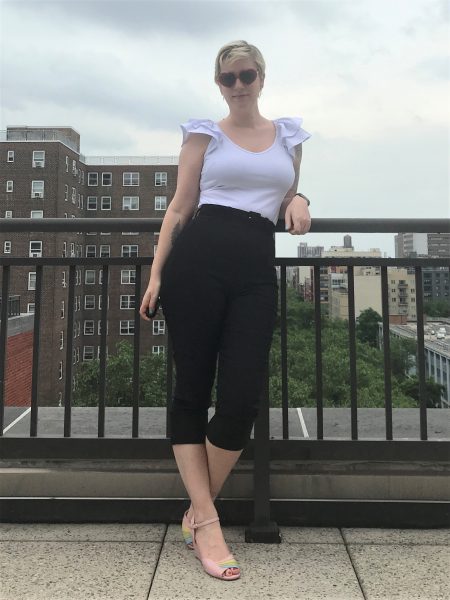 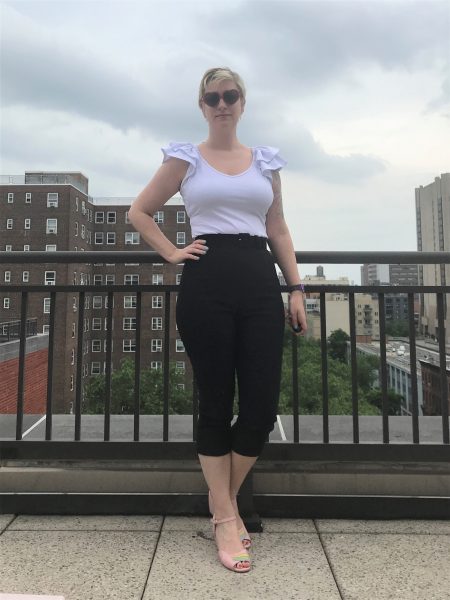 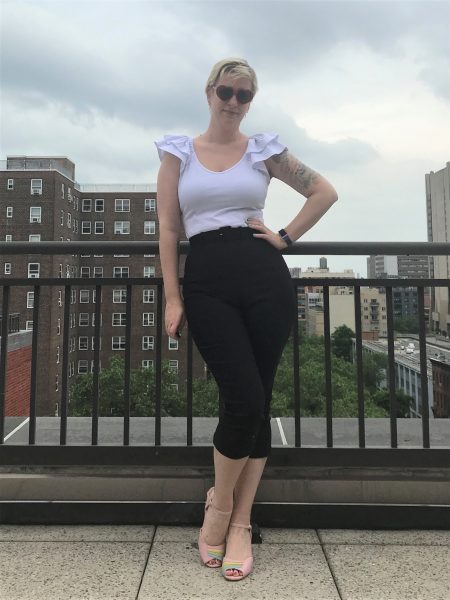 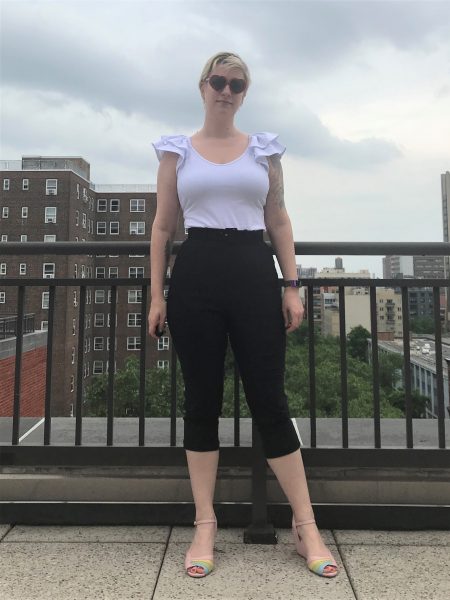 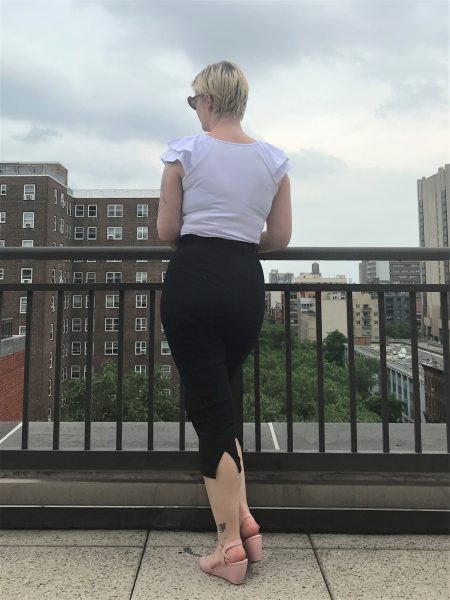 These capris feature a high waist that’s almost high enough to truly reach the smallest point of my waist on my extremely long torso. They are made of a sturdy, stretchy poly blend called “millennium bengaline.” The stretch makes them comfortable and easy to move in despite how tight they may look. Additionally, they are fully lined in the same fabric, so they end up having a shapewear effect and don’t show pantylines no matter what kind of underwear you’ve got on. I made a point of wearing my usual athletic Dear Kate underwear instead of anything seamless to show off this fact.

The capris come with a matching belt. And I have to point out that the placement of the belt loops is genius. Way too often, there is only a single loop in the middle of the back and then a long space before the next one at the sides. With that style, my belt always pulls up above the edge of the pants on either side of the single back loop. But here, there is a pair of loops in back a few inches apart on either side of the zipper. In total, there are four equally spaced loops in back and two in the front (none right on the sides). This keeps the belt in place in the back even after I’ve bent down and moved around a bunch.

It’s unfortunate that there are no pockets (can’t we at least get some flat ones in the back??), but these are otherwise a dream to wear. Additionally, if you’re between sizes on the chart, you can safely size down. I fall in between medium and large, but the mediums are perfect on me. And I believe the model on the Vixen site (Rachel) has 43” hips, yet she’s wearing small to accommodate her tiny waist and looks great (you can see more photos and notes from Rachel throughout the Vixen Instagram).

As for the “Lolita” top, it’s the same super-soft and comfy cotton blend as the Powderpuff style. It runs slightly less tight than other Vixen tops I have such as the Powderpuff, Girl Gang, and Bad Girl. I might size down to a small if I ever buy another since I know I’d be wearing it tucked into high-waist bottoms and I prefer a smoother line in that case. Plus, it’s stretchy and has side darts that make it more boob-friendly than average.

I love that the Lolita isn’t as low-cut as some of the other styles, yet still shows a hint of cleavage. It also features soft elastic at the shoulders, so you can wear it up like I am, or you can wear it off-the-shoulder. All in all, it’s a great boob-friendly basic top with a little extra something special thanks to the girly flounce sleeves. Definitely recommended! 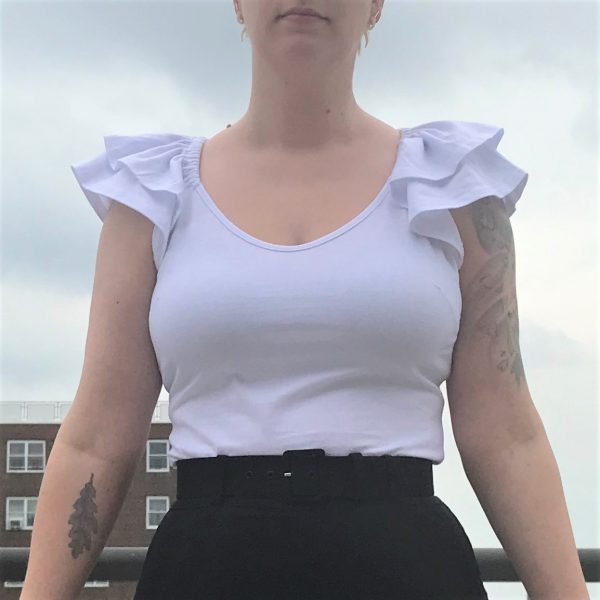 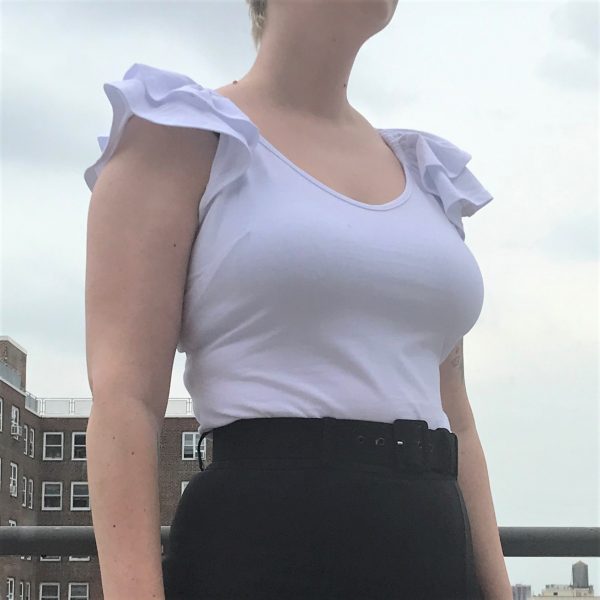 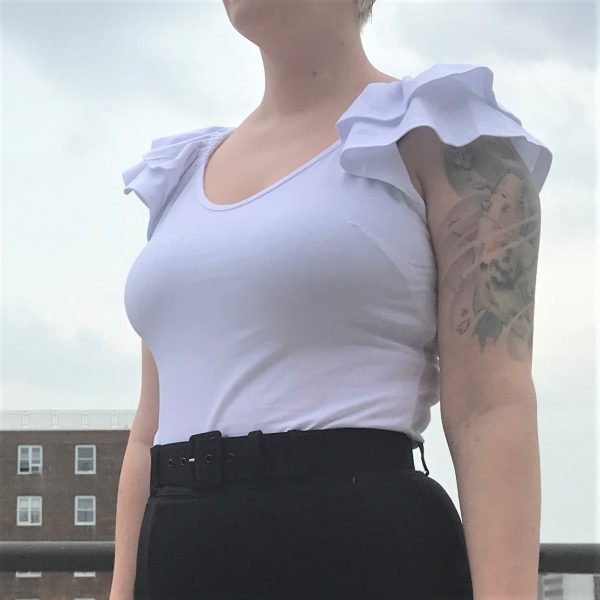 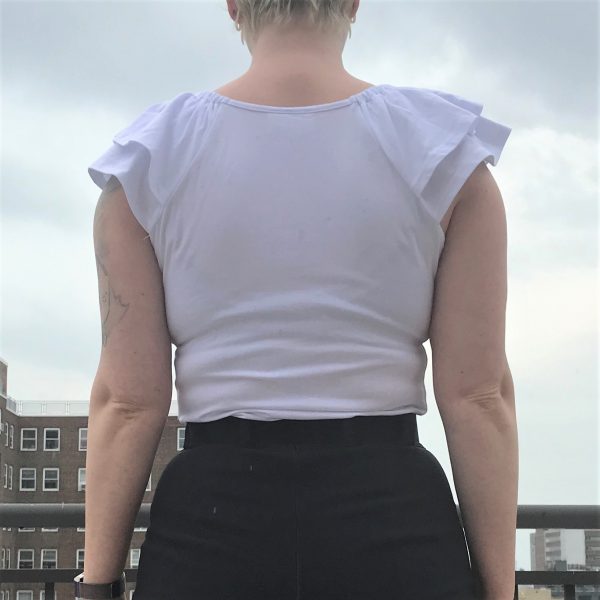