When someone suggests that you downplay your décolletage or minimize your large chest, are they boob shaming you? I suspect “yes” would be the answer from Ella Alexander, who wrote, “Is the Décolletage Really Out of Fashion Again?”

Not all of us fall into the industry’s beloved androgynous mould. […] So what are the unfortunate few of us still with unfashionable boobs supposed to do or wear?

Well, the resounding answer is hide them. Don’t let anyone catch a glimpse lest you be labelled “inappropriate”, “tacky” and “brazen”. Forget what you read about displaying your female sexuality; if you are over a C cup it makes the dinosaurs uncomfortable so the best thing for everyone is just to conceal them.

I found Alexander’s article through an Amanda de Cadenet tweet. Given that both Alexander and de Cadenet work in media and were responding to criticism of a red carpet gown for a major media event, I’m not surprised at their perspectives. Given the context, I share it! 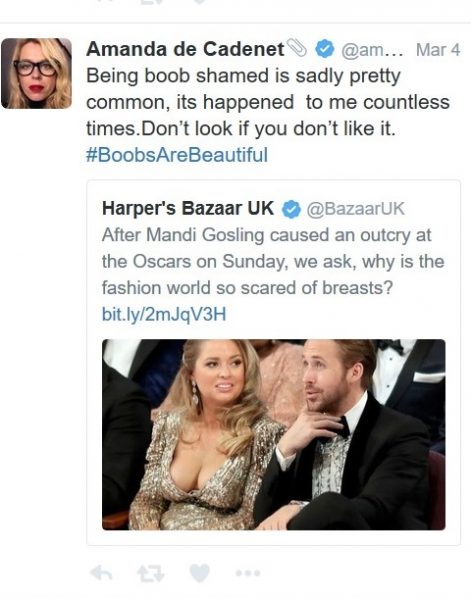 The more surprising “yes” comes from a Wall Street veteran–although if you know Tilton, it’s not surprising at all: “I would never send someone home for showing too much cleavage. Women should be able to be smart, sexy and sophisticated in how they dress,” she told the Wall Street Journal writer Joann Lublin.

At the other end of the spectrum, both in her work and personal life, is Ellie Krupnick, a writer I included in my recent roundup:

Sometimes I say screw it and decide to wear a form-fitting sweater or body-con dress. The inevitable result: stares (from other people), fidgeting (my own), and the subsequent self-doubt. It’s not that I hate the way I look in tight dresses; it’s that I don’t like the attention and double-takes, the feeling of carrying around a literal burden.

Krupnick is only writing about herself here, but shifting focus from a large bust is a common reason that busty women are asked to cover up in a corporate setting. In her book Earning It (that I just reviewed on the C&K blog), Lublin shares how Paula Rosput Reynolds, a former chief of Safeco and AGL Resources, approached an executive that she felt was displaying too much cleavage:

‘Here is the deal. You are a very attractive woman,’ Reynolds told her lieutenant. But ‘the men on your team joke about what you are wearing, how much cleavage was showing here today.’ The executive began to wear less revealing blouses, though ‘every so often, she regressed,’ Reynolds recollected. ‘She will always be a more flamboyant dresser than I might be.’

In her WSJ article, Lublin relays how a human resources VP for Intel advised three new college graduates against visible bra straps. She told them, “I would hate for people to focus on your bra straps rather than focusing on what you went to college for.”

When I hear that a large-busted woman has been asked to revise her clothing choices, I don’t immediately think, “Boob shaming!” I want more details.

First, why is the person requesting more clothing coverage? It’s never comfortable receiving wardrobe criticism, but there’s a big difference between “You offend me. Put those things away!” and “To get ahead in this company, you may want to consider other ways to dress that put less emphasis on your chest.”

Second, what is the large-busted woman’s goal? In another C&K blog post, I wrote about a very tall customer at our April pop up shop. On a business trip to Japan, her hosts always directed her to the lowest chair at the conference table so that she was the same height as everyone else when seated. She could have refused the offered chair and sat where she pleased, but her goal was to get a deal done. If she had made an issue of where she sat, it wouldn’t have happened. We have every right to dress however we want, but sometimes covering or minimizing a large chest can help us reach a goal.

Finally, who’s suggesting the change? I’m not as outraged by anyone whose job it is to get traffic. If they’re not shaming big boobs, they’re shaming something else. It’s just noise that I can tune out. However, it’s harder to tune out criticism from people who are close to us, especially when it’s unexpected.

We had a 92-year-old neighbor who was very dear to us, but I still remember the time she rang our bell, and I opened the door in a tank top. Her first words were something like, “Good Lord! Put some clothes on!” I accept my large chest and know that I look amazing in a tank top. I also realize that my flat-chested Irish neighbor was born in 1924. But for an hour after that exchange, I had to remind myself that I’m not a freak.