Do you know that fine balance we develop between blending in and being ourselves?  Lynn Tilton doesn’t have it.  And remember how hard we work to avoid comments like these about our bodies?  Lynn Tilton isn’t worrying about them.  Instead, she’s commuting by helicopter from New Jersey to Manhattan every morning to oversee the 74 businesses in which her private equity fund invests. 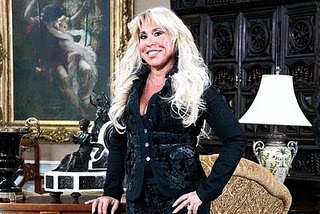 I discovered her on Saturday, when she was featured in The Wall Street Journal here.  (If the link doesn’t work, email me at darlenecee@gmail.com, and I’ll be glad to send the article to you.)   I’ve only just begun to research more about her, but I love what she has to say about the need to bring manufacturing back to the United States. I think I’ve found a new role model.

Now, forgive me for taking a superficial path, but of course it was her cleavage in the picture above that made me think about her for this blog.  And I have more questions than answers.  For example,

In the videos I’ve watched, she has a low, measured speaking voice, which is great for being taken seriously–at least she follows one of the rules.