Just time for a quick dress review this week. It’s another Miss Candyfloss frock, this time with a very different neckline than any I’ve reviewed before.

This is the “Sia-Katalin” dress. MCF produced several of these tuxedo-style dresses this season, including navy/red, red/red stripe, navy/white/navy pinstripe, navy pinstripe/pale blue, and black pinstripe/white. To be honest, I wasn’t really into the look until I saw this bright teal/light pink colorway, and then I was smitten. Teal and pink is one of my favorite color combinations and it’s rare to find them in one garment.

In this case, my photos are a little dull, but MCF’s photos are more saturated than the fabric is in reality. So imagine the color is somewhere in between. Additionally, while the manufacturer photo shows a pink belt, it actually comes with a teal one. I personally prefer the pink one, but it’s not really a big deal. Plus, how hard can it be to find a pink belt if I really want one? 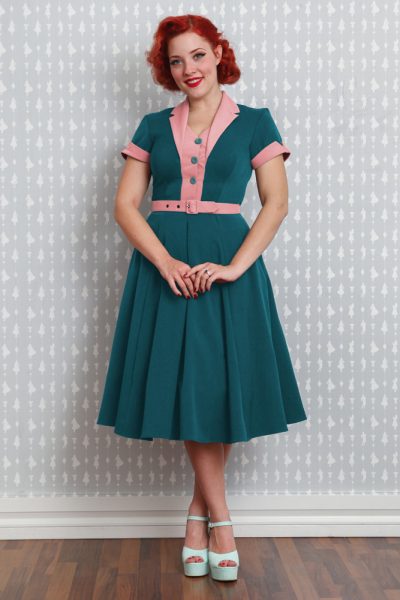 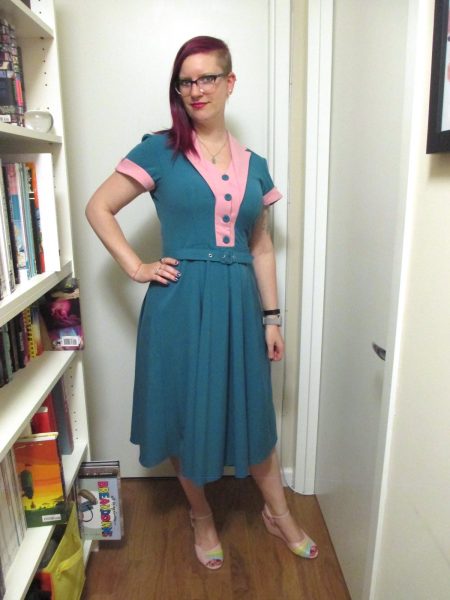 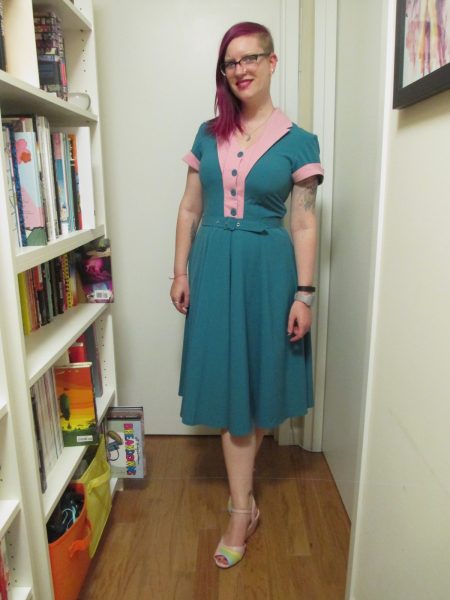 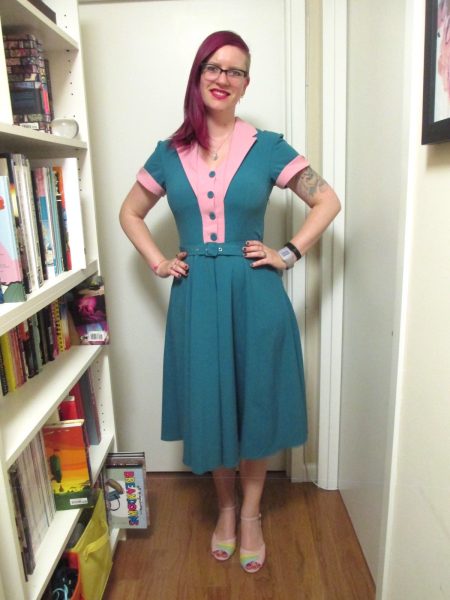 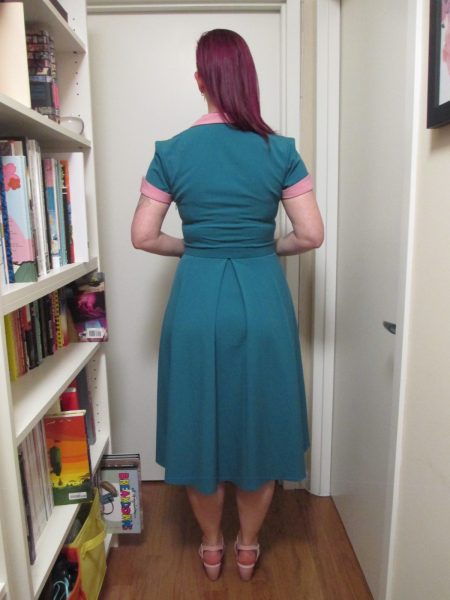 The dress is made of MCF’s oft-utilized 62% polyester, 32% viscose, 6% spandex blend. It has a lovely medium weight to it (no threat of the skirt blowing up at the slightest gust of wind!), but was cool and comfortable enough for me to wear it on a day of temperatures close to 80 degrees (F).

The buttons on the front are functional, though there’s also an invisible zipper on the left side. So you can choose to step into it or pull it over your head. Unfortunately, there are no pockets. Further unfortunate, the side zipper’s head rubs against my arm throughout the day. It didn’t cut me or anything so serious, but it was definitely annoying. I’d be tempted to remove the zipper, sew it up, and just use the buttons, but my hips are a little too big to squeeze past the waistband and I’d rather avoid popping a seam trying to pull it on (it’s happened before!).

I’m not sure if it was an intentional design choice or a side effect of the fabric’s stiffness level, but I quite like the squared-off shoulders. There’s something retro-futuristic about them. I also appreciate the little notches of the sleeve cuffs (which is visible in the third photo below). It’s details like this that make a dress feel extra special.

As for bust fit, check out these seams: 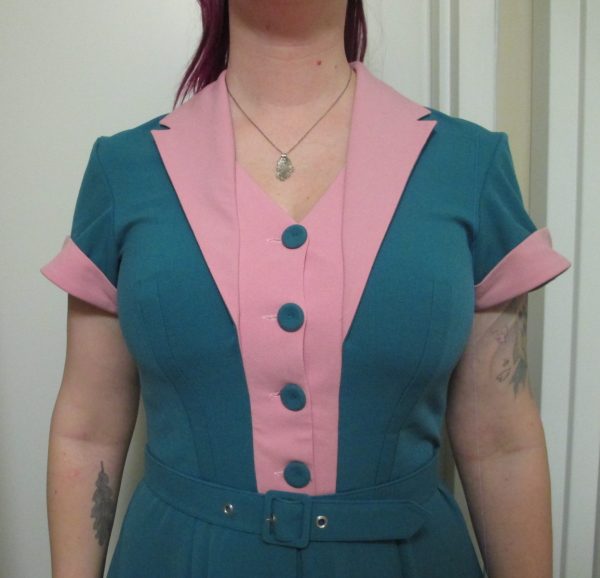 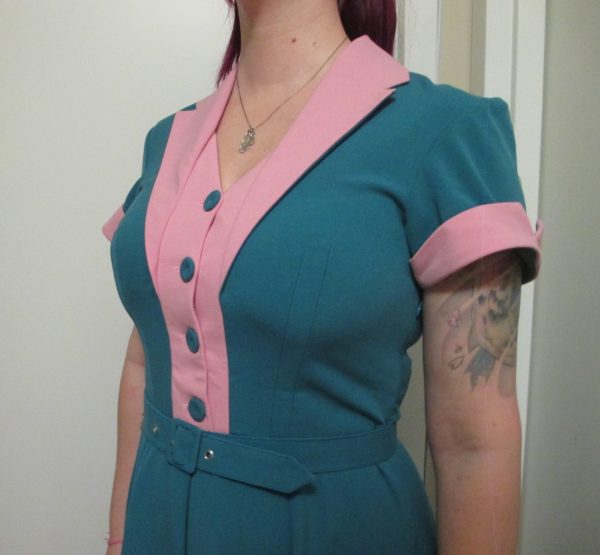 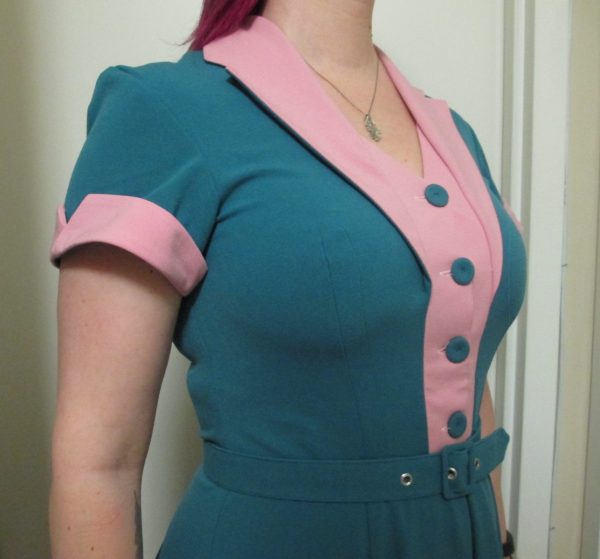 The bodice looks super smooth from a distance, but it features two slightly diagonal pairs of darts leading from the waistband up to the top of the breast area. These have got to be the smoothest bust darts I’ve ever seen—there’s absolutely no puckering, mini-pockets, or phantom nipples! It’s really impressive construction. And of course the darts also mean there’s space for boobs and nice contouring along the body. It does look like the buttons are straining somewhat, but their placement, combined with fabric that offers only minor stretch and doesn’t pull and bulge the way thinner material might, means that I think there’s still room for a slightly bigger bust than mine.

I would probably give this design a B for boob-friendliness compared to the A+ I’d give all the pleated-bust dresses I’ve previously reviewed.

Finally, I have to rave a little about MCF’s amazing customer service! Originally, I purchased a different dress than this one, but ended up being super disappointed when the color proved to be a dusky blue instead of the bright cobalt that appeared online. The Sia-Katalin dress was the exact same price, so I emailed MCF to ask if I could exchange one dress for the other. Most smaller retailers in my experience only allow you to exchange an item for a different size or occasionally color, not an entirely different style.

But MCF had no problem doing the exchange I requested. They sent me a form to fill out and include with the return, and held the new dress in my size until the returned dress reached them. Then they were super fast to let me know the return had been received and to send out the new one. I paid for the return shipping (naturally), but they did not charge me to ship the replacement.