What’s your Holy Grail big bust item for lounging around the house? By the time my Bravissimo pyjama tops “with integrated support” arrived a couple of weeks ago, they were going to be my Holy Grail wardrobe solution. I was going to walk to the corner store, take out the garbage, and work at home in them, all the while feeling lifted, supported, and carefree.

Of course when an item of clothing reaches that status, it’s hard to measure up, and sadly, these tops didn’t. As you can see from the two photos on the left, the tops aren’t bad. They’re just not amazing. I didn’t like the shape that the blue top gave me, and I didn’t like the foam padding in either of them. I guess I was expecting something a little more like a sports bra.

It took ordering tops from across the Atlantic to figure out a solution available from the bra stores in my own town. Trying these tops made me wonder two things:

In other words, why not find a wire-free, foam-free bra that I can wear under any top? So when I was in Magic Corsets the other day, I asked to try a wireless bra and was given the Goddess Keira (style 6093) in 36G. That’s what you see on the right in the photos above and below.

I could immediately fasten the Keira on its tightest hook, so I asked to try a 34 instead. They didn’t have it in the Keira, but they had a 34G in another Goddess style that was okay, but not as comfortable. Since my goal in a wireless is comfort, I decided to keep the Keira, and it’s been great. However, it isn’t perfect either. I’ll go into more detail below.

First, here’s a closeup of the integrated bras in the Bravissimo pyjama tops. Interestingly, the blue one actually seems to fit better! Although I prefer the rounded shape that I get in the pink top, I look like I’m drooping over the band in the photo below because of the extra space in the cups . Both tops are in 34GG-H, but the 34F-G may have been better for me in the pink.

I’m wondering if the integration of the band into the back of the blue racerback gives it more strength to help the cups keep their shape. The pink band simply stretches around the back like a tankini top. Both have three columns of three rows of hooks, which is nice (although one of the hooks has already come off the blue one). By the way, I could fasten each on their tightest hooks immediately, so I’m glad I didn’t order a 36 band.

In case you’re curious, here is what the backs look like. I was afraid I’d look too squishy around the armholes of the racerback, but I think it looks fine. 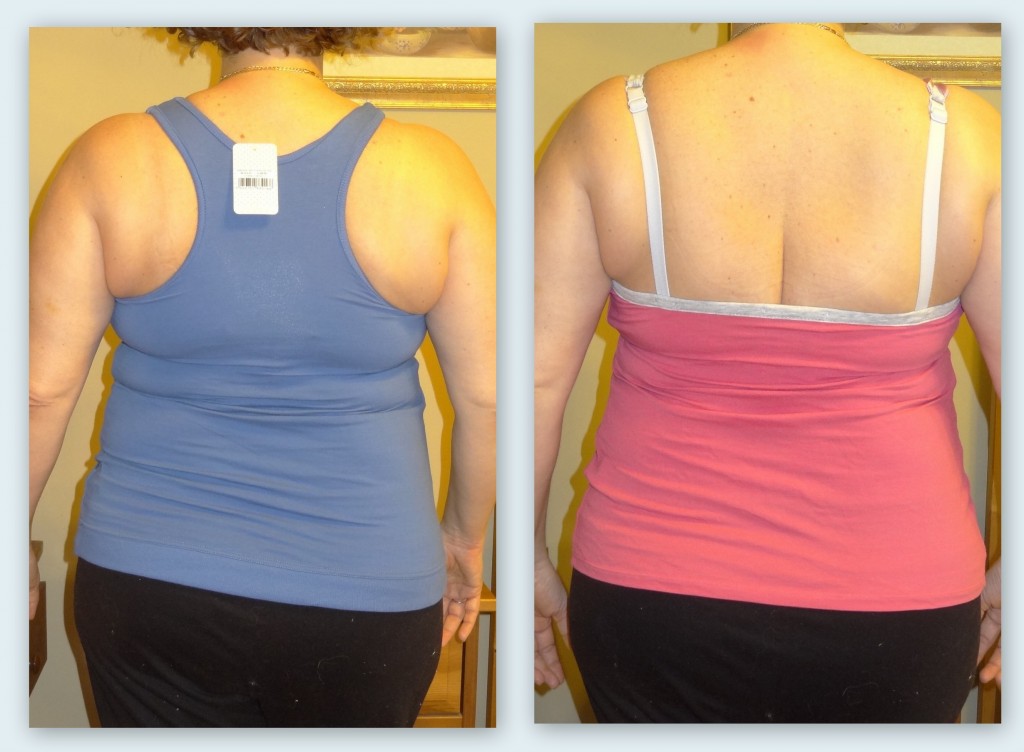 Finally, here’s what I’ve learned about wearing a wire-free bra. Number one, I am the worst bra shopper in the world because I tripped up once again on American/UK sizing. But I do have an excuse–I had just been trying 36G Freyas and Fantasies in the store, so I assumed when the fitter gave me a 36G Goddess, it was the same thing. After all, Eveden owns Goddess, Freya, Fantasie and Elomi. But I was wrong. Take a look at the size tag that I only studied after removing the price tag. 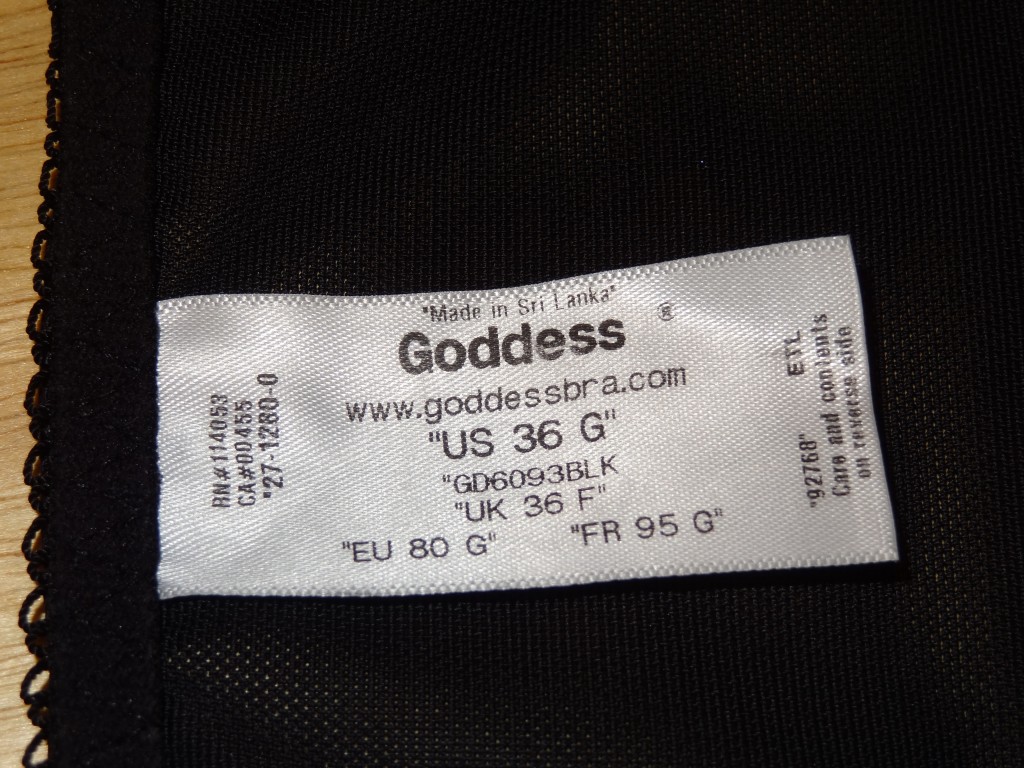 This explains the side boobs that aren’t fully encapsulated by the cups and the lack of anything close to tacking by the center gore (although I never expect anything wireless to fully tack unless it’s a Cameo or Jeunique) . Given these details, plus the fact that the band isn’t tight, it’s pretty amazing how lifted I look, isn’t it?

I’m a lot more shaped and supported in the Goddess than when I go braless, and that’s the point. After wearing an underwire all day, I’m ready for a break at around 7 p.m., but I’m not ready to walk around the house without a bra. I just don’t like the look. I like the way I look and feel in the Goddess.

On the other hand, the Goddess Keira isn’t an all-day bra, even if I’m only working around the house. After a few hours, the band starts to stretch out, causing the gross feeling I get when a bra band is too loose and everything starts sliding around.

It looks like I have a new bra routine: underwires during the day, and wireless before bed. However, I know better than to think this is the routine for everyone. I had dinner with a master bra fitter last week who said her underwire bra is the last thing she takes off before going to bed, and that if your bra isn’t comfortable all day, then you may not be wearing the right size. I’ve heard this from others as well. I also know that wireless options are limited to non-existent for women with large cups and 32- bands. What have you found?