After three weeks of absence thanks to the move from hell (though aren’t they all?), I’ve got a stable of items to review. This week I’ll start out with the follow-up to my recent review of the Wonderbra Ultimate Strapless.

After Wonderbra’s innovative offering failed to work out, I ordered Gossard’s Super Egoboost Strapless from Amazon UK. It says on Amazon that it costs £20.80 – £39.95 depending on size, but for some reason the nude 30G that I ordered was only £17.33 when I added it to my cart. That made up for the awfully high shipping cost of £9.79 (about $15 US), for a total of about $44 US. Considering that the suggested retail price is $69, that’s positively a steal! And if it didn’t fit, I figured I’d be able to easily recoup my money by selling it online. 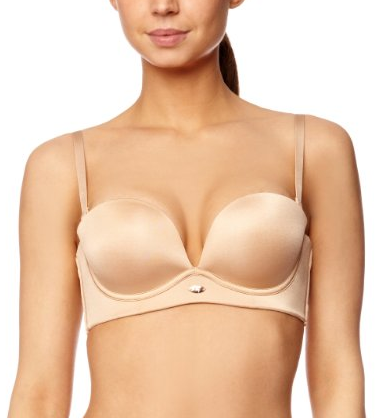 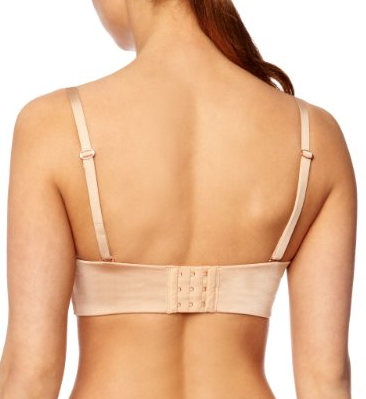 Unfortunately, it does not fit. I’ve tried Gossard bras in the past, and find them to fit much like Parfait, one cup and one band size small. As such, I ordered 30G. But the band was so outrageously tight that I literally could not close it. I had my boyfriend close it for me so I could at least assess the cups, and those fit much like the Deco–very round and uplifted, but a touch too shallow on me, leading the cups to fold over a little at the bottom.

Despite the band being unwearable, the bra still created some impressive cleavage–about halfway between the Deco and the Wonderbra Ultimate. Like the Wonderbra, this one has a rather thick band, almost like a longline, which I like since it helps it stay smooth instead of pinching in on the top and bottom edge where the elastic and silicon are located. Gossard’s fabric is not as thick as Wonderbra, though, so it still has a little of that pinchy edge feeling that Wonderbra lacks.

I’d like to try a 32FF, but don’t really want to order from overseas again just to try it out, especially since the cups weren’t a significant improvement over the Deco’s. Perhaps if I sell the 30G at cost . . . .