“Having an elegant work get-up is important. It encourages others to take you seriously. This goes for both the new young guy and the aging old-timer. Your words are more likely to fall on deaf ears if you wear an unbuttoned plaid shirt over a faded rock concert T, than if you sport a snappy dress shirt. If you don’t believe me, go to the bank twice, once wearing the former get-up, and once wearing the latter, and see the difference in the treatment you receive.

“Snappy clothes will also help you bestow a good first impression. This is crucial when meeting with clients, as well as new people within the company.Â  A well put together outfit also delivers the subtler message that you pay great attention to detail. It suggests that if you put so much effort into your image, you’re probably just as meticulous in your work.” Start Dessing Like A Pro – AskMen 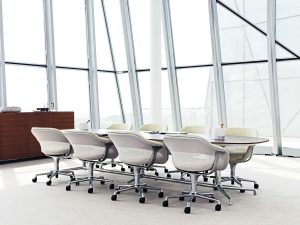 This week my corporate perspective on female modesty is coming from a male dress code perspective, not so surprisingly for anyone working in the corporate environment as the male dress codes were there first, and they are clearer and often stricter than female dress codes. Because we work together in the same companies,Â corporate women need to consider both female and male perceptions.

In the corporate world, you’re always having to convince people to see things your way, whether you work in development, finance or IT, so your body language and clothing must support your message. This is true whether you are a man or a woman.

Currently, my job focuses on change management. I introduce new ways of doing things to employees and departments within a multinational corporation, so a lot of thought goes into how people change. When you are working with people, you are first and foremost working with their attitudes and beliefs. From there you work with their thinking, then their feelings, then their actions, and finally, the desired result.

Today I attended a training session with other coaches in our company. After the trainer left, some people commented on her clothes–they were too fancy, and the low neckline wasn’t suitable for the situation said both women and men. It was their perception, which they have every right to have. The trainer came to us to sell what she was training; it was her choice to sell her message in this manner. However, she may have been more persuasive if she had taken her audience’s attitudes and beliefs into consideration. Because she was speaking to a Nordic audience, it wasn’t a big problem. In Finland, we’re straight talking women who take respect as granted.

Although I said that following the corporate dress code is important for both men and women, today’s training highlighted two special considerations that women must make. During a teamwork session, we discussed how especially women who go to Asia to do change management or training need to really think about how to sell the message, which includes taking local attitudes and beliefs into consideration. In most Asian countries, the corporate world is male-dominated, and the dressing rules are strict–like suits only. If you intend to gain their respect, you must follow their dress code as they do not automatically respect a woman who is coming there to tell them what to do. In China we must also introduce changes subtly so that they can think it was their idea. We try never to embarrass them if they don’t know something so that they don’t lose face, especially in front of a woman. For us Nordic women, it is an act because respect has nothing to do with gender here.

Yet even in Finland, modest dressing plays a huge role, especially when you are big busted. In the training we had several busty ladies, and I noticed that none had any cleavage on show. During the break I dared to ask them how they felt about it and showed how my tweed dress from Pepperberry would look without the scarf I was wearing. Everyone agreed that we’d not be as credible if we showed our bust in the same manner as the small-chested trainer lady did. And while they loved how my dress fitted and asked where I got it, they did say it was way too booby for work even though it would be ok outside work.

My guideline in how I dress for my corporate work is that all methods of communication affect the way my message is understood. I communicate with all that I do. Words form only 7% of one’s message to others, tones form 38% and body language forms 55%. So I dress accordingly, whilst trying to maintain my personal style and comfort zone like I wrote in last week’s post Comparing Yourself to Others. Modesty according to corporate and cultural norms is expected from both women and men. I don’t find this as a female-specific topic in the corporate world. It’s important for everyone to look earnest at their job, whatever that means. But ignoring what others think of you is not really an option in one’s career path in the corporate world.

6 Comments on Corporate Curves Report: The Importance of Looking Earnest – The Modesty Panel