Here comes a long one! This year I actually only spent three hours at CurvExpo on one day, unlike last year’s two full days. With such limited time, I ended up just catching up with the usual suspects of Claudette, Curvy Kate, Panache and Cleo by Panache, Freya, Parfait by Affinitas, Mimi Holliday, and a brief look at Marlies Dekkers just because I so desperately want them to carry large cup sizes (they still don’t). I’m splitting all the brands into two parts because there’s so much I’m excited for, it’s simply too much for one post. Today I’ll cover the C’s—Claudette, Curvy Kate, and Cleo by Panache (plus regular Panache).

Best news of the Expo! All of Claudette’s Spring 2013 bras are going from a minimum 30 band down to 28! The maximum cup size is still a European G, but lovely sales manager Lindsey assured me that the next goal is to incorporate up to K cups. She told me they receive lots of requests, and it’s actively being worked on.

Unfortunately, that means the neon Dessous bras won’t be available in 28 until the next reorder (whenever that is), but there are still eight new gorgeous Dessous colors to choose from in the meantime, as well as three other ranges. Darlene remarked that she’s impressed with the care that Claudette and Curvy Kate are putting into their larger cups. Both brands are really struggling to create a K cup, but they refuse to dump anything sub-par on the market.

I was doubly impressed by Claudette’s breaking away from the color trends that it seems like everyone else is sticking with. I saw tons of neon, jewel tones, and turquoise, but Claudette offers some gorgeous fiery reds, yummy pastels, and unexpected brights with a playful hint of neon here and there—including an awesome camouflage print! (As always, click to see a larger image.)

You may recall in my CurvExpo preview that I mentioned CK’s new multi-way bra, “Desire.” Well I got a chance to look at it, and it certainly seems promising. It could not be used as a strapless bra, but each strap is attached with a metal hook on the front and back. I just can’t understand why more bras aren’t constructed this way. I had to laugh, though, when the CK rep touted the fact that they designed it so the strap adjuster goes on the front side instead of the back—if the straps are interchangeable then there is no “front” and “back” part of the strap! The black version will be released in January 2013, followed by Sea Foam, Purple, and Ivory in March. Here’s a photo of the sea foam set, though note that the straps here are actually sewn in place since it’s a sample: 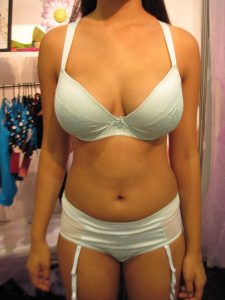 CK is also working on a true strapless bra that goes beyond a J cup. It may be ready to present as early as Fall 2013. There are quite a few totally new designs in the CK arsenal, including the Enchant, with a much lower center gore. If this one sells well, they’ll add continuity colors. 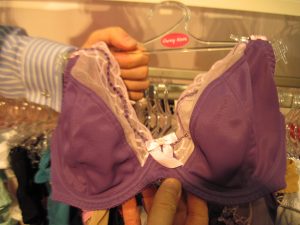 As with many brands, CK’s upcoming collections are heavy on contrasting color details. Here’s the Romance in Charcoal/Sea Foam: 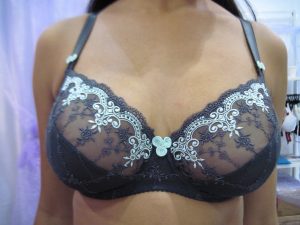 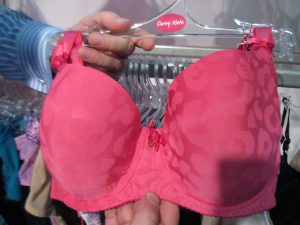 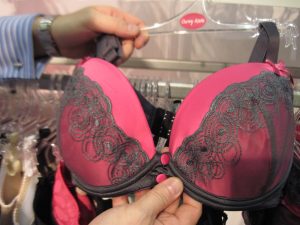 Last but not least, the response to Curvy Kate’s first swimwear foray was so positive that they’ve greatly increased the collection. There are six news series. Half are patterned and half coordinating solids, so it’s all very mix-and-match. Additionally, each series has at least two different bikini tops and most have two bottoms, giving you even more freedom to create your own custom suit. My favorite was easily the floral “Flirt,” especially the halter top’s little flounce of ruffles along the bottom. Too cute! 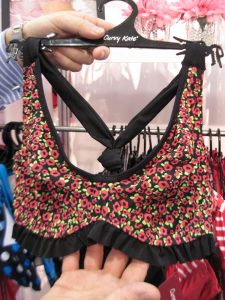 Oh, how I adore Cleo. I’m still waiting with bated breath for some of last year’s finds to be released. But now I’m all excited for the next few seasons’ worth as well! Jewel tones and contrasting details are out in full force for the upcoming collections.

Way more exciting than old favorites in new colors, though, is Cleo’s new swimwear line for Spring 2013! Every single one of these pieces starts at 28 and goes up to a 38 band, and all go up to at least a G cup. Most of the prints are clever twists on the nautical theme so present at last year’s Expo. Like Curvy Kate, each series offers a variety of tops and bottoms. Many of the tops are quite different and clever.

Lastly, I got a look at Panache’s new Sculptress line. It’s a line of full-figured bras covering sizes 36-46 D-J. It’ll be available in January 2013. In terms of colors and shapes, it was nowhere near as interesting as Panache and Cleo by Panache’s usual offerings. But since it’s a new line, it’s a lot smaller. I was happy to see that none of the garments looked like “granny” bras or panties. And I absolutely loved one set’s bold floral pattern. I’d like it in my size! 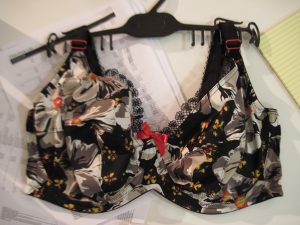