After a Saturday spent clicking through the 38 links on my blog roll, I bring you the pieces that caught my eye. (Yes, my Google Reader is fully updated now.)

Thanks to Druber & Drunter’s list of Basques and Strapless Bras Up to a G/H Cup, you no longer have to draw a blank every time someone asks for advice on what to wear under a special occasion dress. I added Va Bien’s Ultra Lift Strapless in her comments because it’s available in 32-38G. Do you have others to recommend? Now we simply need someone to create an H+ list (ahem, Astrid?).

That True & Co. You’ve Been Hearing About

As you probably suspected, it deserves the biting judgment that Busts 4 Justice pronounces on it:

True&Co believe they have the first innovation in lingerie since Victoria’s Secret painted their changing rooms pink. And do you know what? It’s a more excellent comparison than they know. It looks pretty, and customers feel like they’re being listened and catered to. But in real terms it changes nothing. This is incomplete and in some cases downright misleading advice that will only perpetuate the bad fit endemic in the US and beyond. And I’d argue that the market for that was already pretty saturated.

Pepperberry gets a few deserved criticisms from Bras I Hate, and the comments they elicit are as interesting as the original post. However, there’s one Pepperberry dress that I’ve been noticing looks great on everyone–the Chiffon Spot Dress proves that ruffles are NOT all off limits to women with a large bust. 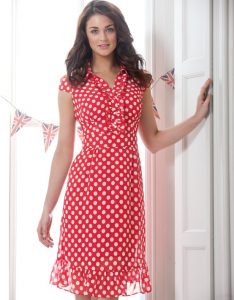 Check out A Sophisticated Pair’s reviews of the Liverpool Dress and Vanity Fair Button Front.  She looks amazing in them. Even though I’m not a fan of the high neckline of the Liverpool, I love everything else about it. One must-have with a high neckline like this: enough fabric in the bodice so that it’s not all boob from neck to waist. (As the last photo in this Hourglassy post from 2010 shows, even a scoop neckline can’t save a dress that is all boob from neck to waist.)

In case you missed my excited tweet about it, having to wear two sports bras at once means you can have an MP3 bra pocket like the one I Never Took Home Ec shows us how to make!

And if you thought Leah’s last tutorial was limited to tank tops, check out Bras I Hate’s tutorial on how to make a baggy polo shirt fit.

Accusations that Georgina was wearing the wrong size dress reminded her what it’s like to be on the receiving end of another woman’s assessment.

Miss Underpinnings has great advice for men who suspect their girlfriends or wives would look better in a different size.

Since I purchased a bra from a Lady Grace store in Maine last summer, I was especially interested in the recent Lady Grace experience of Quest for the Perfect Bra.  I think you’ll agree that she has a right to rant.

I picked out a cute Freya soft cup bra and asked if they happened to have it in a 30GG (the size I normally wear in Freya). Rather than responding with a “yes” or “no”, the salesperson gave me a look and said “Is this for YOU?” I said yes, at which point she started muttering “no, no, no!” and attempted to measure me with my sweatshirt still on, her “no’s” growing progressively louder. She held the tape at least 3 inches away from my ribcage, measured above my bust, but never took a bust measurement. “No, no, no! Absolutely not!” She then declared that I needed a 39 band, but would be okay in a 38D and “definitely not a 30GG”.

In 2010, Invest in Your Chest conducted a super-thorough undercover review of the bra fitting services of high street shops and department stores. Now it’s our turn in the United States. Guest blogger Maddie, a 32JJ/K, “wore a 40DDD around all day for the purpose of feigning ignorance” and reviewed Victoria’s Secret for Braless in Brasil and Nordstrom, JCPenney and Macy’s for Boosaurus.

New blogger Curvy Pear shares her frustration with, and a surprise solution to, the problem of underwires setting off airport metal detectors. To be on the safe side, she’s on the search for a wire-free bra just for traveling and provides a review of the Royce Sadie.

Venusian Glow’s advice on the most cost effective way to buy your first right-sized bra is geared especially towards women who don’t have a well-stocked brick and mortar store nearby.  I tend to agree that it’s best to set aside a large chunk of money and go all out for as many styles and sizes as you can afford in one shipment. I’d be curious to read your comments to her post–and I still need to add my own.

Finally, DON’T FORGET TO VOTE for your favorite Curvy Kate USA Star in a Bra contestant! Voting closes this Wednesday, June 27, and the winner will be announced this Friday. I would be so nervous if I were one of the top 10! As it is, I’m going to have a difficult time deciding amongst my top 3 choices: Krista Cousins (you MUST check out her music video asking for your vote), Chrysten Fowler (so cute!) and Tiffany Schmidt (the Curvy Kate pieces look amazing on her–it’s not that the others distract from the pieces, but somehow they seem to be more in the spotlight on Tiffany).