I’ve been on a real sewing kick lately. This week I’ll show you how to turn a men’s (or oversized in general) tank into a women’s tank.

I fell in love with the design on this shirt, but the only size left when I purchased it was a men’s medium, which is about the equivalent of a woman’s XL. But even a true woman’s XL would fit differently than this. With a men’s shirt, the armholes are far bigger and the neckline is a bit higher. Here’s what you will need to make your own:

Here’s the tank as it first started out. 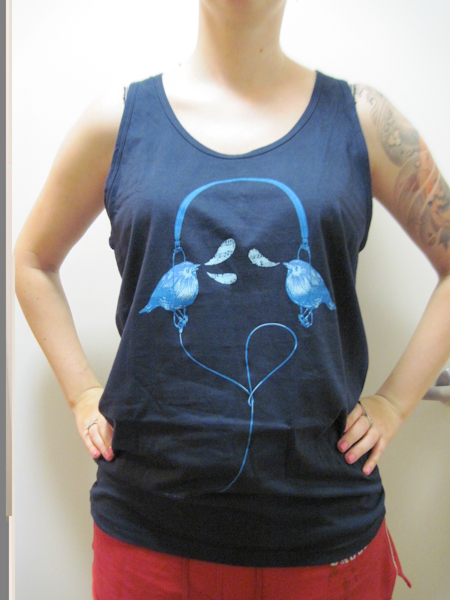 Here it is from the side. Look at those huge armholes! 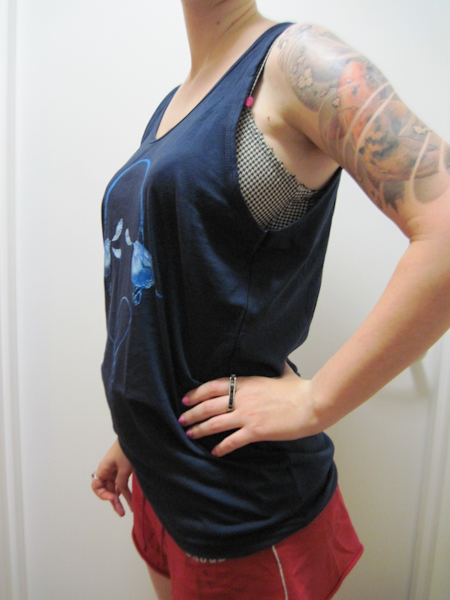 Turn your tank inside out. Now you’ll start by shortening the straps. This will help close up the armholes. If you have a tank that fits perfectly on hand, you can use it as a guide. Or you can just put the tank on, and pinch up the straps to get it into the position you like, then measure how much fabric you pinched. I used another shirt as a guide. Line up the perfect tank’s armholes so that they’re just touching each side of the new tank’s armholes. 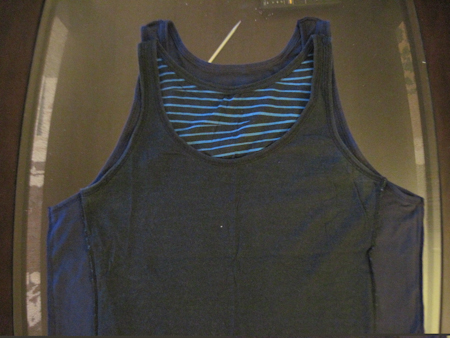 Measure the difference between each shirt’s straps. My measuring tape says one inch, so I’ll actually be taking out two inches (one inch from each side of the seam). 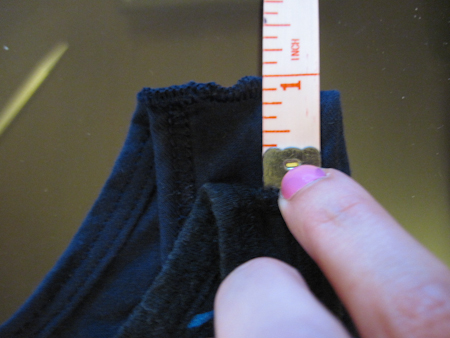 While you have the shirts laid out, you should also use chalk to mark where you want to sew up the sides. Again, I used my old shirt as a guide, but you can eyeball this step by putting the shirt on and pinching both sides at once. 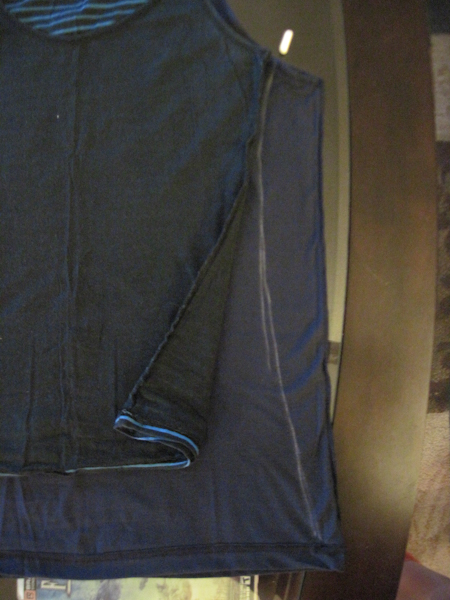 Pin up both sides. This should finish shrinking the armholes to a reasonable diameter. 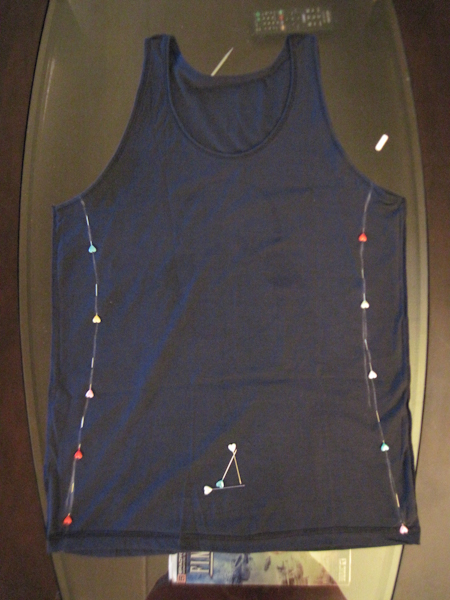 Back to the straps. My shirt already had a pretty high neckline to begin with, and I didn’t want to make it even higher. So instead of sewing a new seam evenly below the old one, I essentially brought the back side of the straps forward. Normally you would just sandwich the straps at the existing seam and sew south of it, but I sandwiched it an inch toward the front of the tank. Note that this will also bring the seams forward, onto the front side of your shoulder. So if you don’t like the way that would look, then stick with folding it evenly at the existing seam.

So, if you want to follow what I did, take the front of the strap two inches (or however many you measured) below the seam and join that spot to the seam. You’ll sew it just next to the existing seam. Here’s a photo of my strap after pinning it in place: 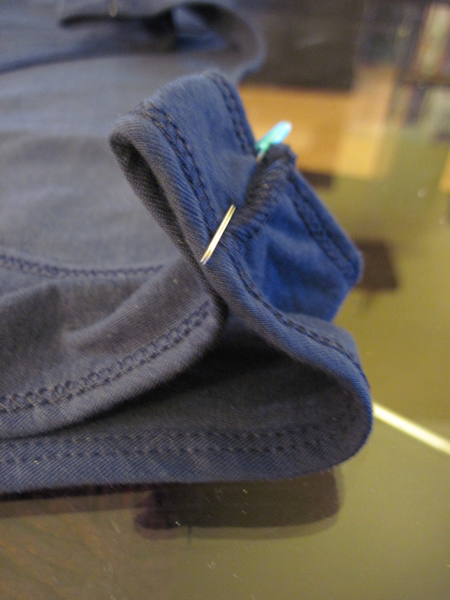 If you’ve just sandwiched the straps at the existing seam, then sew an inch (or whatever you measured) south of it.

Next, sew up the sides following your pin guides. Turn the shirt right side out and try it on.

You may notice at this point that the body of the shirt fits well, but the armholes are gaping a lot. 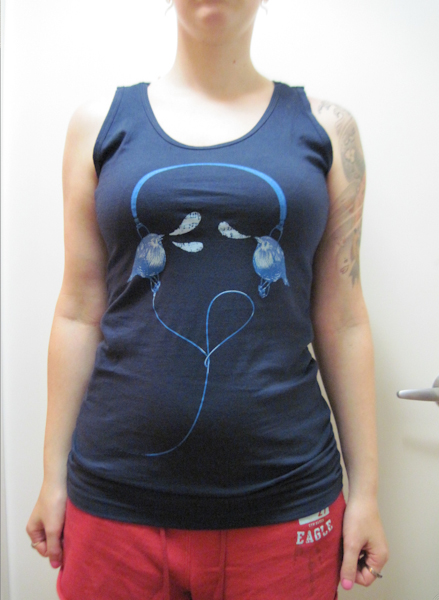 You’ll need to add a dart on the front side of each armhole to get rid of this problem. Start by turning the tank inside out. Now put it on and, while standing in front of a mirror, pinch it where you want the dart to go. Differently sized and shaped breasts will dictate its placement. Play around with the placement to find the best spot for you. In my case, it was a just a touch higher than my armpit. 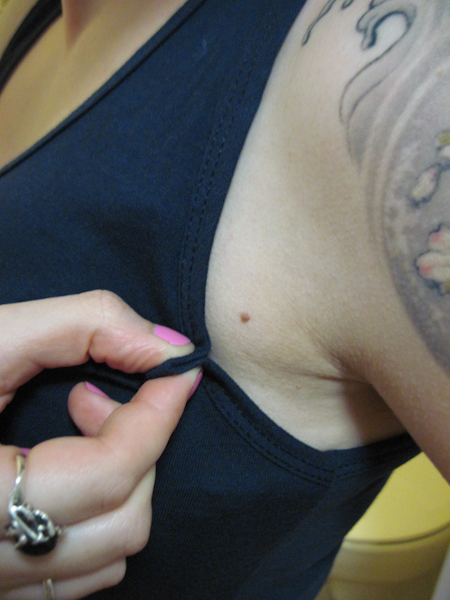 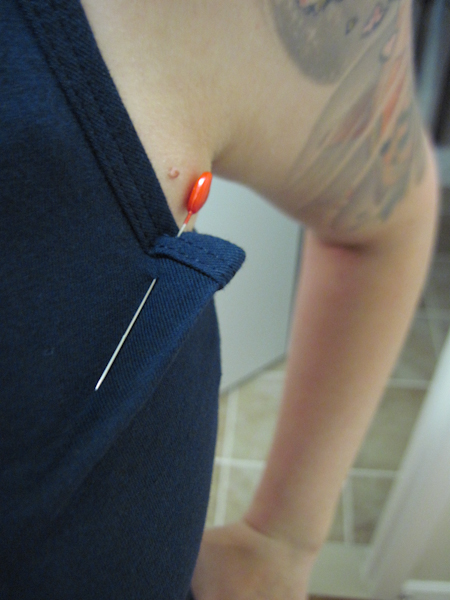 Now take the shirt off. Measure the distance from the edge of the shirt to the dart’s end point. This is Measurement B. 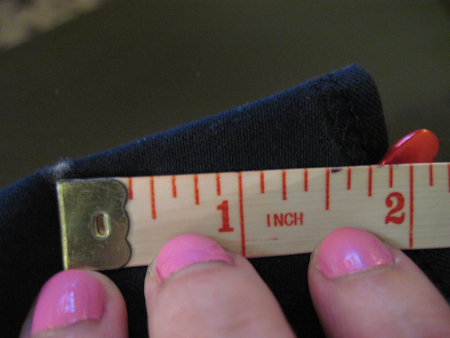 Make a chalk mark along the fold. Remove the pin and measure the distance from the chalk mark to the new shoulder seam. This is Measurement C. 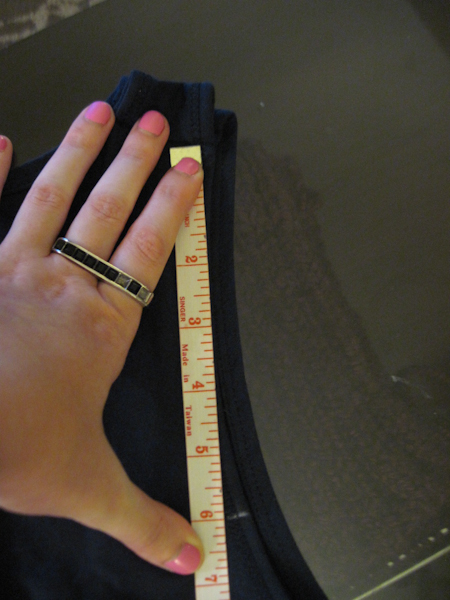 On the other armhole, start by finding and marking Measurement C. Now fold the shirt at the chalk mark, and find Measurement A, and pin in place. Then find and mark Measurement B. You can sandwich the shirt vertically to make sure both darts are at the same angle relative to the edge of the shirt, or use a protractor if you want to be really sure.

Now, while keeping the dart folded, remove the pin and move it further away from the dart. You want it to hold the shirt in place for sewing without being in your way. If you’re using a sewing machine, place it just far enough that the machine’s foot will not hit it. 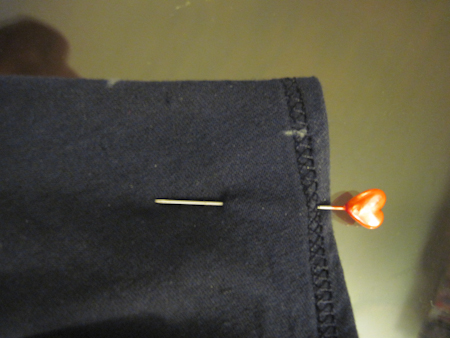 Sew your dart, beginning from the outer edge of the shirt. Make sure your dart’s end point goes right up against the edge of the fabric, even if you have to sew in a tiny bit further than your chalk mark. If the seam stops further inward than the edge, you’ll end up with a little pocket at the tip of the dart.

You’re done! Try on the shirt. If it fits well, you can cut off all the excess fabric.

Here’s a photo of my finished shirt with its (slightly imperfect) dart: 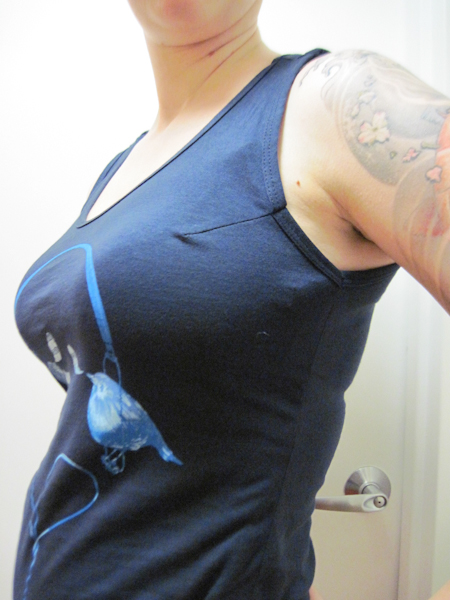