It’s been over a year since Bravissimo announced they would no longer be producing clothing and I have managed to survive (mostly by buying from Urkye). Recently I was in London and checked out two different Bravissimo locations: Covent Garden and Oxford Circus. My shopping plan for Bravissimo on this trip was a new bathing suit for sports and to try on their nightgowns.

First stop was the Covent Garden store. The store is small with fitting rooms in the lower level. Very few sizes were out for the different styles and the philosophy of the store seemed to be to ask for your size.

In the Covent Garden store I asked to try on the Speedo branded swimsuit and ended up buying the solid black one in size 36J.

I haven’t worn this suit swimming yet but it is the best fitting and most secure suit I have ever worn. The only issue is that I can’t do the plastic clip in the back up myself. Maybe this suit will inspire me to check out the indoor pools in Berlin? The suit sells for £62 British Pounds and the US equivalent on my credit card statement is $70.30.

Next was the Flora Nightdress in Forest Green in size 36 HH-J. This nightgown is based on the Flora bralette. In my opinion a bralette should be a looser fitting bra offering moderate support with stretch fabrics and elastic. The Flora Nightdress is incredibly supportive however I found it way too supportive for a night gown. This sells for £46 or $82 on the US website. 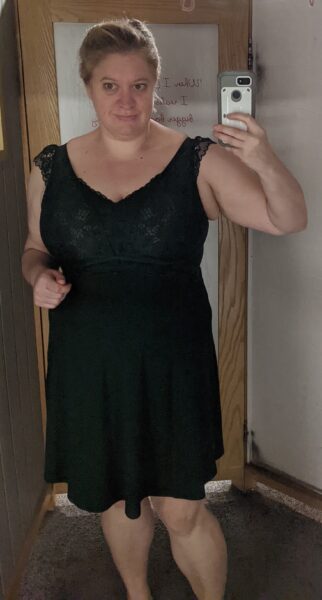 The size 36 HH-J was also incredibly tight in the underarm area which aside from being uncomfortable I also found unattractive. I did not end up buying this night gown.

Third, I tried on the Fern Nightdress in size 36 HH-J. Turns out I tried on the nursing version of the Fern nightdress (this isn’t available on the Bravissimo website). This version has clips at the top of the bra portion for easy nursing access, extra gathering around the stomach area and the length appears to be longer. This nightgown is comfortable while offering gentle support. However, I didn’t like it enough to ask to try the non-nursing version. 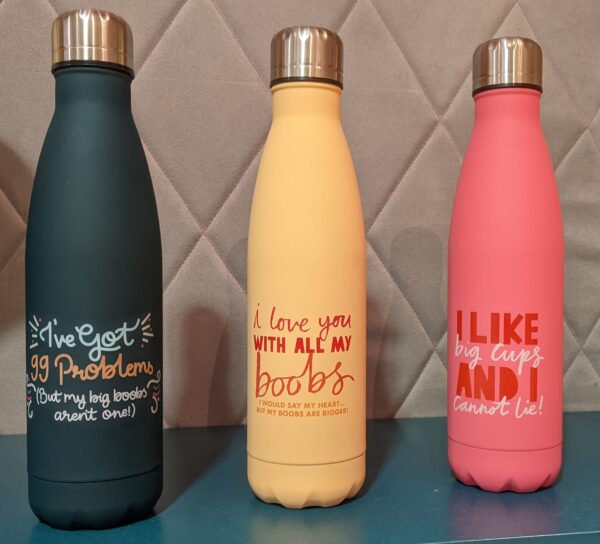 Also available in the Covent Garden store were these water bottles. 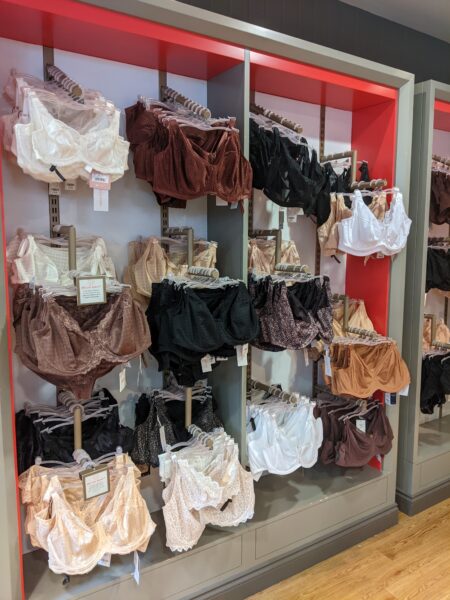 And an assortment of bras in multiple nude colors.

The next day I headed to the Bravissimo in Oxford Circus. This is the store that I first went to in 2018 (read about my experience here). This store is large and has 25 fitting rooms on the lower level! 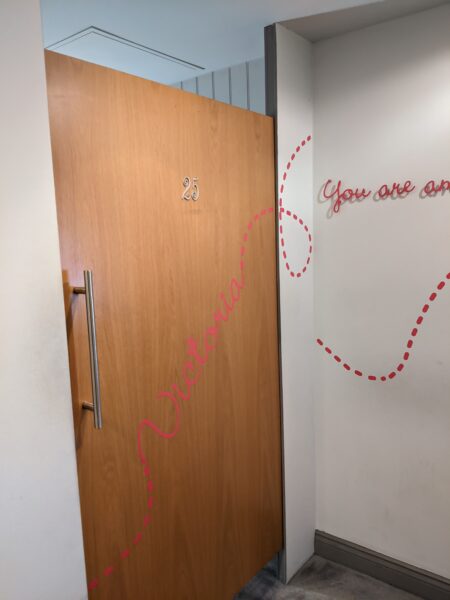 What I noticed most was all the extra space on the main floor that used to be filled with clothing. 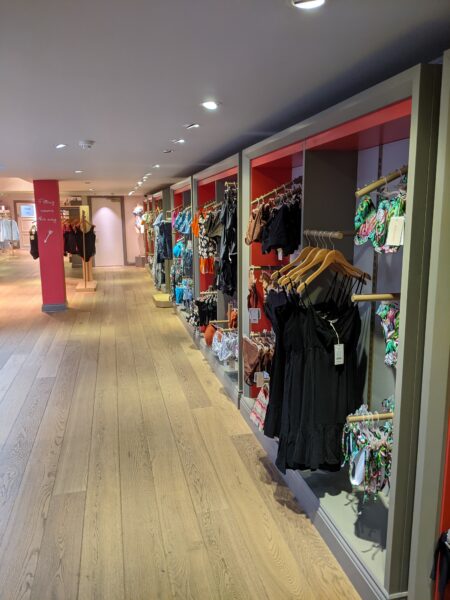 I tried on the Flora Nightdress in the next biggest size 38 HH-J and found this to be more comfortable and I love the red color.

It also fits much better around the underarm area. I purchased this and the price on my American credit card was $49.80. 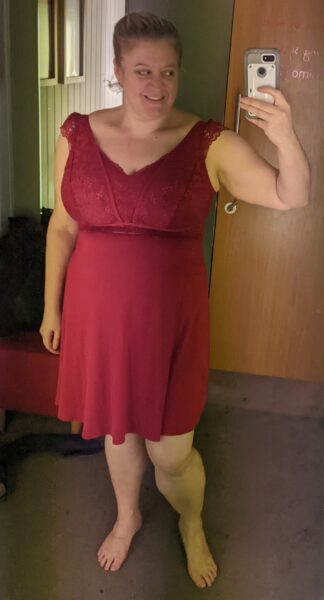 I thought about trying on a Bravissimo branded bra this trip but I didn’t see anything that I was excited about or that looked like it had enough power mesh to support my heavy fuller bust.

Check out these coffee mugs with the same sayings as the water bottles. 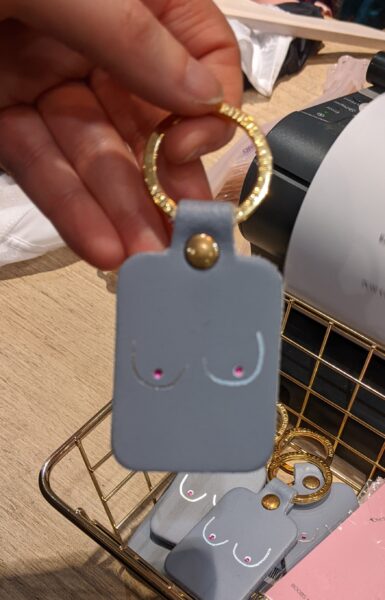 And this keychain! I’m not going to carry a keychain with boobs on it but I do think it is cute. 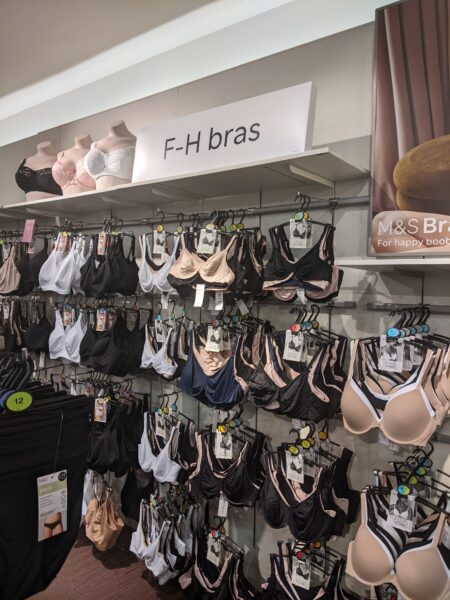 While in London, I also did some investigative shopping and checked out the sizes available in the bra section at other stores. Marks & Spencers (M&S) carries bras up to a UK H in their stores. I find this utterly amazing. They even sell a two-pack for £20 (the US dollar is strong currently and this equals $23 although normally it would be closer to $27). Does this two-pack of bras up to a size H appear to be amazing quality? No, but is it still incredible that women have the option to try on bigger cup sizes in store and purchase them for a reasonable amount? Yes! 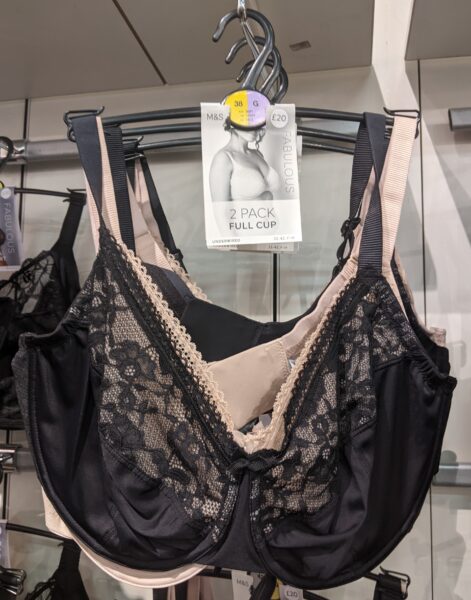 I’m not convinced that a M&S bra would offer the support that I need but I do believe it would be far more comfortable than wearing the wrong bra size. M&S sells their own brand up to a UK J cup online and offers a ship to store option if you are in London on vacation and would like to try out a full bust bra for £20 or less.

A British friend that I met in NYC and had lunch with during my trip tipped me off to the department store John Lewis. The American equivalent of this store is Nordstrom. Once again, the Brits have access to larger cup sizes in the store. Nordstrom does sell bras up to a UK 36 JJ online but I don’t recall ever seeing any size bigger than a DDD in any American store that wasn’t a specialty lingerie store. John Lewis carries Fantasia and Freya up to a G cup. Oh, and I loved John Lewis. I would definitely go back there. 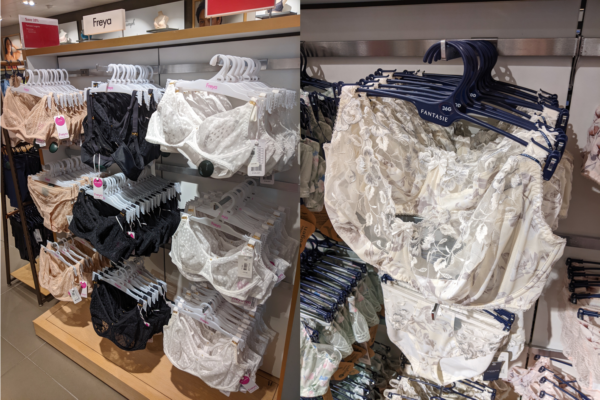 The female population of the United Kingdom is 34.5 million while the USA has a population of 167.5 million – why do women in the UK have access to fuller bust cup sizes in stores? The ability to buy a properly fitting bra for a price I could afford in my teens and twenties would have improved my confidence and been healthier for my body. It makes me angry that American women don’t have the affordable larger cup sizes that M&S makes available to British women. Why has the bra marketplace in the United Kingdom evolved to offer more sizes than the American bra marketplace?

2 Comments on GGMusings: Visiting Bravissimo in London & Fuller Bust Bras in the UK