It’s been ages since I’ve written a post about sewing or alterations. But since NYC started the stay-at-home order (five weeks ago? Six? I’ve lost track of time), I’ve been doing a lot of sewing. Mostly, I’ve been making and selling masks through my Etsy shop. But I also ordered several vintage dress patterns.

I’ve had my eye on these patterns for ages, and being stuck at home with minimal business to work on was the perfect excuse to finally place an order. Sewing has given me a creative outlet and makes me feel productive. It’s also a perfect activity to do while binge-watching true crime shows!

So far, I finished one of the three patterns I bought, and I want to share it here and discuss the alterations I made to make it fit perfectly.

First up, here is the seller from whom I bought all the patterns: https://www.etsy.com/shop/tvpstore

I cannot recommend her enough! Her patterns are not originals. Instead, she makes copies of the original on better quality paper and sends it to you along with a small booklet of modern tips to help fill out the original instructions (which are also included).

The paper is still flexible and lightweight, but it’s heavier than the easily torn, transparent tissue paper you normally get from modern pattern companies. As with any standard pattern, it’s printed on a giant sheet and you must cut out the pieces. I saved some of the bigger scraps of leftover paper at the end so I could use them to alter the paper pattern and re-use it with my own personal alterations already built in.

Speaking of making alterations, I highly recommend that anyone interested in sewing their own clothes (vintage or otherwise) purchase the seller’s homemade booklets, “Guide to Grading” and “Guide to Adjusting & Altering.” There’s a little bit of overlapping information in these, but I still find them both extremely useful.

The difference between grading and adjusting is that “grading” refers to changing the entire size of a pattern, from S to XL, for example; while “adjusting & altering” is for when your pattern is the correct size but you need to make small alterations such as making the torso slightly shorter or longer.

When purchasing a pattern, you need to select the size that most closely matches your largest measurement, whether that’s bust, waist, or hips. Then you can “adjust” the pattern to fit your smaller body parts. Most vintage patterns are only available in one size because they were already cut out by the original owner. But you can “grade” a pattern up to the size that matches your largest measurement, then “alter” it to suit your smaller parts.

The dress pattern I purchased was a rare choice that is already the correct size for me. I measure 38” bust and 29/30” waist, and this pattern is for 38” bust and 31” waist. So I didn’t have to do any grading, but I did have to alter it to fit my waist and ribcage. Here is the pattern I used:

You can see from the back of the pattern cover that it’s actually a rather simple construction—only 6 pieces for the dress plus 1 for pockets and 1 for the optional belt:

Since I knew I would need to make alterations to the pattern, I started out by making a test bodice out of muslin. With my super-long torso, I immediately extended the pattern’s bodice length by one inch before I even cut out the muslin. When extending a garment, you’re supposed to cut it in half at a certain point along its length and add an inch there, but to be honest I was lazy and just extended it by an inch at the bottom. Here’s the muslin: 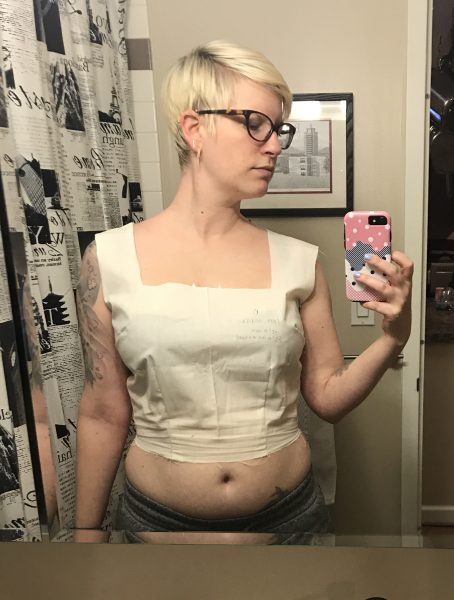 You can see that the bust fits pretty well, but the rib cage is quite loose. At this point, the waist did not seem loose and somehow my waists always turn out small, so I decided to leave that part alone.

To fix the bodice, first I extended the bust darts up an inch higher. They’re supposed to reach the fullest point of your breast, but on me they stopped a little too low. After that, the bodice bust was in the right location, but the underbust was still very baggy. I have quite a straight up-and-down torso (my underbust and my waist are about the same measurement), so this came as no surprise. It’s an issue I experience with most off-the-rack clothes too.

The next step to make the ribs more fitted was to move the side seams inward by half an inch at the armpit (so really it would be a full inch smaller on each side) while still keeping the waist seam in the same place. Here’s a photo that illustrates this:

This garment includes “facing” around the neck and arm holes (basically just a lining around the edges rather than a full lining). You’ve probably got several dresses in your closet with this feature; it helps the neckline and arm holes maintain their structure. So if you alter the seam at the armpit, you’ll have to do the same on the facing so that the armhole and armhole facing still match up.

Now the ribcage was improved but the underbust area was still baggy. This is something I’ve experimented with before (such as in my Trashy Diva Rockette dress alteration) and never quite mastered. But since I made a muslin this time, I could play around and try different things without worrying about ruining my garment or the fabric.

With a felt-tip pen, I marked a dot on the muslin at the base of my boob. I needed a dart of some kind that would reach from the fullest part of my breast down to the mark, then angle down from the mark to my waist. Here is what I then sewed: 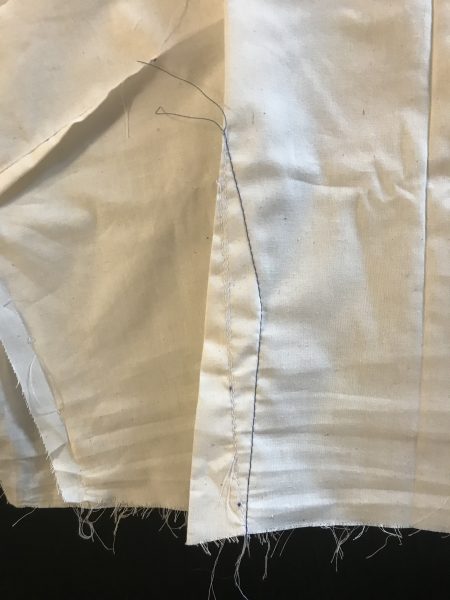 You can see two lines of white thread on the left—this is the original dart that I sewed as directed by the pattern, then the replacement dart extended one inch north. The black line on the right is my new dart. The mark on the muslin is the spot where the dart angles back down toward the waist. The distance from the edge of the seam allowance to that angled spot is the same distance as the base of the dart from the edge of the seam allowance. 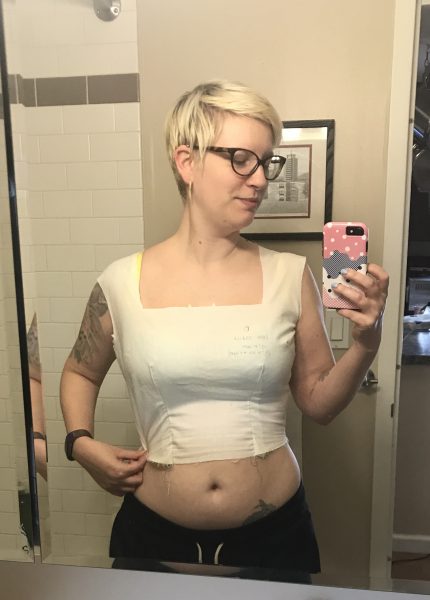 Such an improvement! I then measured each portion of the dart and replicated this construction on my actual fabric. Finally, I cut off the dart’s seam allowance so there wouldn’t be so much excess fabric inside the bodice.

That was it for alterations. Or so I thought…

Once I got the whole entire dress put together, zipper and all, I put it on and discovered…the bodice was too long! With the weight of the skirt pulling the dress down into place, that extra inch I had added was entirely unnecessary. To make matters worse, the waist was slightly too big. My reluctance to shrink the waist was a poor choice too. D’oh!

To fix this, I first took the zipper back out. I didn’t want to sandwich the skirt and bodice together and sew a new line half an inch in because that would also raise the whole skirt up half an inch, including the pockets. But I also didn’t want to unpick the entire gathered skirt, cut an inch off the bodice, and reattach it. Too much unpicking! It would take hours of tedious seam ripper work.

Now, as for that too-big waist: It was only a little big, so I didn’t feel the need to resew both sides of the bodice to make it tighter. I simply sewed the side zipper deeper into the seam so that it had a bunch more excess seam allowance. Technically, this means each side of the bodice is sewn at a slightly different angle, but it’s so minor you can’t tell. Next time, when a pattern tells me the waist is 31 inches, I’ll listen (and alter it down to 29”/30”).

Anyway, here is the final product:

It fits perfectly! It’s missing the giant decorative buttons on the straps and pockets, but those will have to wait until quarantine is over and I can go shopping for them. Now the only question is…should I get them in light blue or dark blue???

8 Comments on Off the Rack ~ Sewing a Vintage Dress Pattern