Since early 2016, I’ve noticed 90s fashion trends lurking but this appears to be the year that 90s style is back with a vengeance. High School age girls are embracing this trend and it even has a name – VSCO Girl. Seventeen magazine says that this name comes from the VSCO app which is for photo editing.

Below are the trademarks of a VSCO Girl and my thoughts as a former 90s high schooler (I was in High School from ‘94-‘98):

Scrunchies – I had an entire basket of these and wore them daily. Purchased at Clair’s.

Hydro Flasks – Umm, I don’t think refillable water bottles existed when I was a teenager. But I did drink a lot of Diet Coke.

Starbucks Cups – We didn’t have Starbucks where I lived and I don’t think I visited a Starbucks until one opened on my college campus in 2001. We did have a gas station across from our High School that sold super sweet “cappuccino” from a machine. And I was totally into this coffee flavored sugar water.

Puka Shell Necklace – I had an ankle bracelet. This was short lived as I kept kicking the shells into my leg.

Birkenstocks – I got Birkenstocks in 8th grade. I’m still not sure what possessed my mother to buy $85 shoes for a 14-year-old but I did wear them for five years so it was definitely a good buy on her part.

Mario Badescu Products – I might have heard of this brand from one of my many magazine subscriptions but I wouldn’t have known where to buy it.

Urban Outfitters – Loved this store and I still do. The weird thing is that I rarely buy anything here but I love walking through the store. It’s not a store with a lot of bust friendly looks which is probably why I haven’t purchased much there in the 25 years I’ve been visiting this store.

To prove that I was an original VSCO girl – here are actual pictures of me in High School sporting my XL T-Shirt, Birkenstocks and Scrunchie. 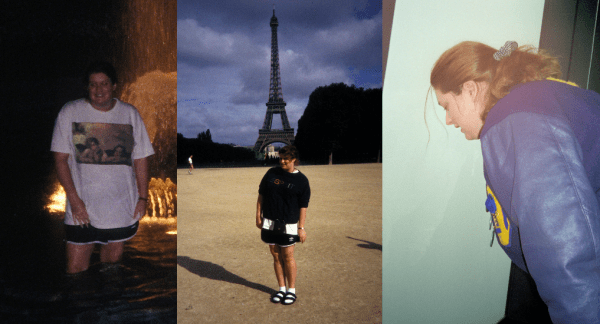 Even better I have recreated my high school look for you all.

My high school look was not super flattering. Looking back, I thought I wore such big shirts in the ‘90s to hide my fuller bust but thanks the to the VSCO Girls I now realize I wore giant t-shirts because it was cool. Check out Clair Danes circa 1994 in a huge t-shirt. 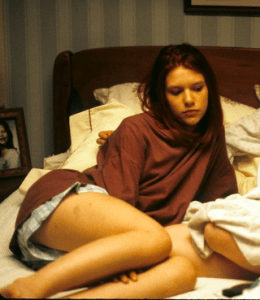 Here are some bust friendly 90s clothing looks if you are feeling inspired. 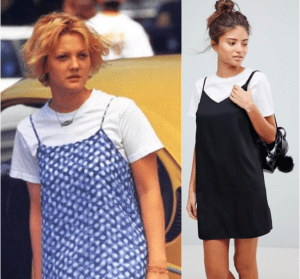 The ASOS Slip Dress that I reviewed in April is so Drew Barrymore. 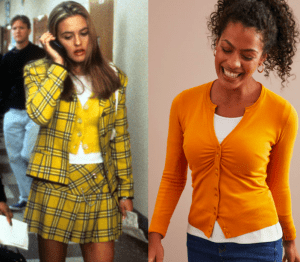 This yellow sweater from Bravissimo totally reminds me of Cher in Clueless. 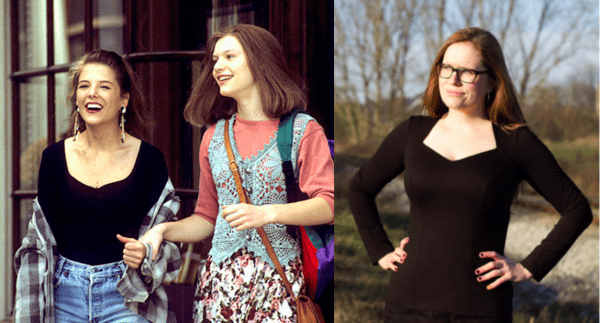 This Urkye Tee looks like the bodysuit worn in the ultimate 90s teen show My So Called Life.