I’ve mentioned the Freya “Pinup” set twice before, most recently when I attended an Eveden marketing event a year ago. In that post, I called it the “standout” piece of the season. Then I sort of forgot about it…until it appeared in a Zulily sale a month ago! I snagged the longline strapless bustier and the high-waisted panties for a steal.

Lately, I’ve been wearing a 28GG or 30G pretty consistently. In fact, Freya is the lone holdout among brands that still fit me in 28G, but even then, it depends on the cut. For example, my Freya Hero and the Deco still fit at 28G, but the Deco strapless requires a cup size up. For the Pinup, I went with 30G (it doesn’t come in 28GG, and I often size up in the band with strapless bras anyway since they tend to run tighter to stay up). Luckily, 30G was the right size.

I originally purchased this set thinking it would be more of a “boudoir” piece, but after I got a nasty sunburn on my first beach day of the season (despite reapplying sunblock!), I couldn’t bear bra straps, and ended up wearing the Pinup bustier several times in one week. It turns out to be the most comfortable strapless bra I’ve ever tried!

The bustier features relatively stiff molded cups, mesh band and wings, semi-shiny black trim, side-stays, two pieces of boning on the front, two strips of silicon at the top of the band, removable straps with two attachment positions on cup and band, and five rows of two columns of hook-and-eyes.

On my long torso, the high-waisted panties (which I bought in size medium) just barely reach my belly button, so they’re not terribly vintage-looking. They’re more like granny-panties, but of course that wouldn’t be the case for a more petite wearer. Additionally, they don’t fully cover my backside, which is another common feature for me. However, for once in my life they don’t ride up into my buttcrack with every step, so they’re still pretty comfy. 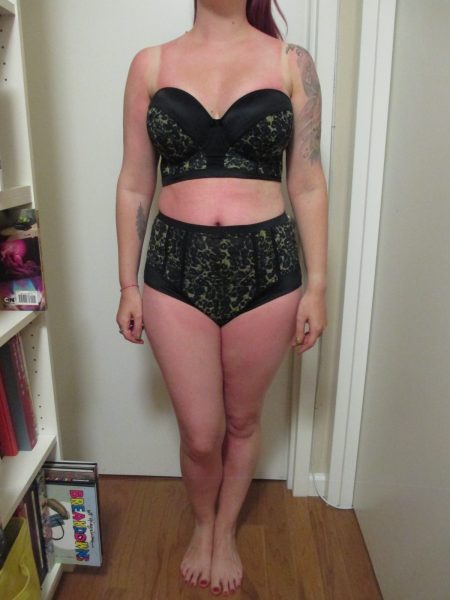 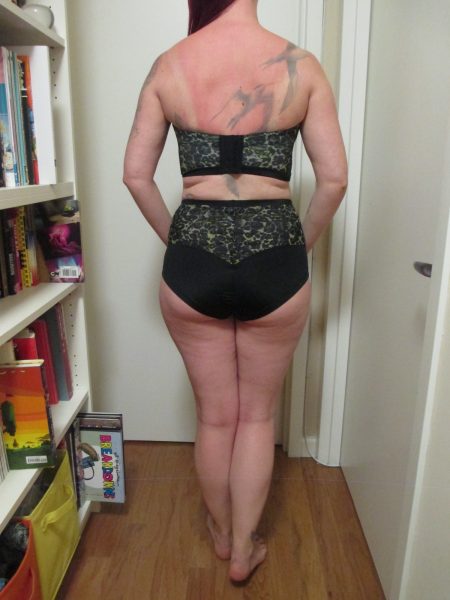 As for the bra’s fit, to be honest it’s not perfect. It fits like all Freya bras do on me: Slightly too closed on top with minor tissue pillowing, and slightly too shallow at the base of the cup with minor cup-crushing. However, the stiffness of the cup actually works in my favor because the cup does a better job maintaining its shape despite the imperfect fit, whereas the spongier foam of the Deco strapless folds and crushes more easily.

These photos were taken after a full day of wear. I even rode my bike to work the day I took these photos and the bra stayed in place! 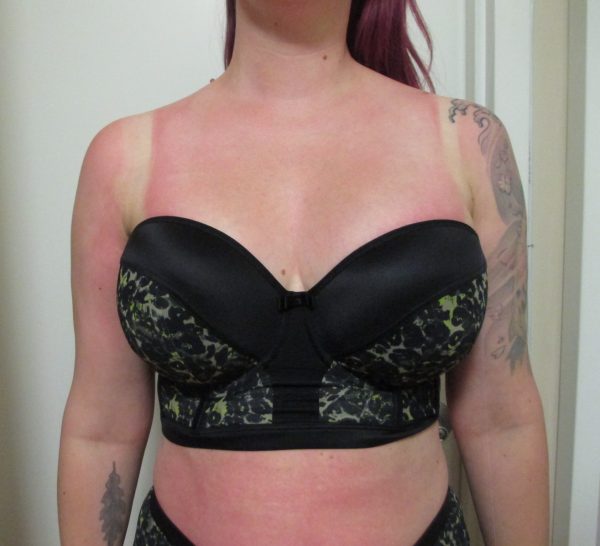 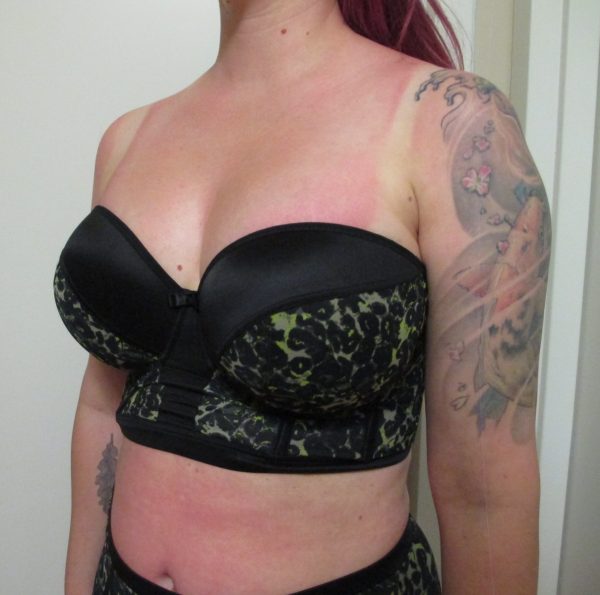 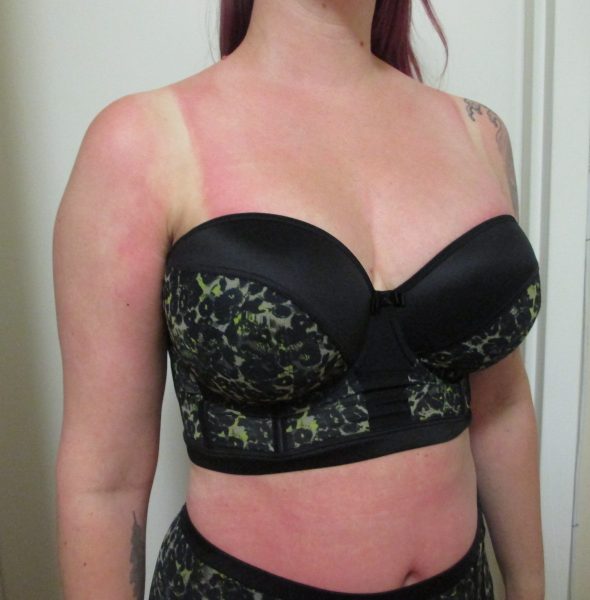 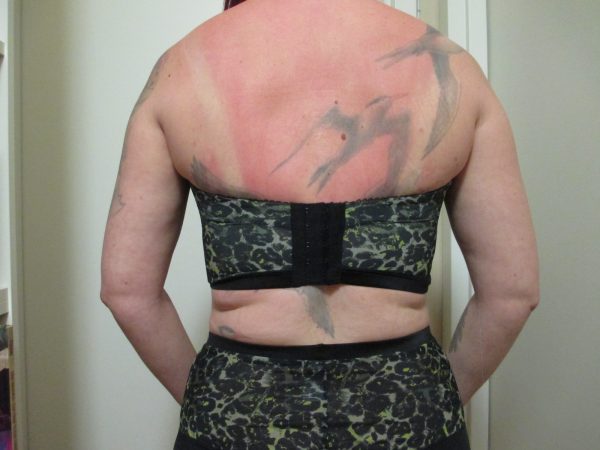 So what makes this “the most comfortable strapless bra I’ve ever tried”? It’s all in the details! The bottom band edging on the Freya Deco strapless (and most bras in general) bites into my skin. I usually wear silicone pads under the worst spot to help make it less painful. But instead of tight elastic, this band is lined with soft and stretchy satin. Why don’t all bras use this stuff???

Next, the top edge of the band uses elastic, but it’s more than an inch wide and a little fuzzy, so it has a nice, soft feel. The two strips of silicone on the inside of this edge has seemingly been partly absorbed by this fuzzy, soft elastic, so it still sticks to your skin without violently pulling on it.

Finally, the tall hook-and-eye pad is also made of a soft, slightly fuzzy fabric.

Now, I do have some complaints. For one thing, the band is nowhere near as long as whatever size the model was wearing at the Eveden event. Mine only comes down about 2 inches past the center of the underwire, whereas hers looks to be at least 5 inches: 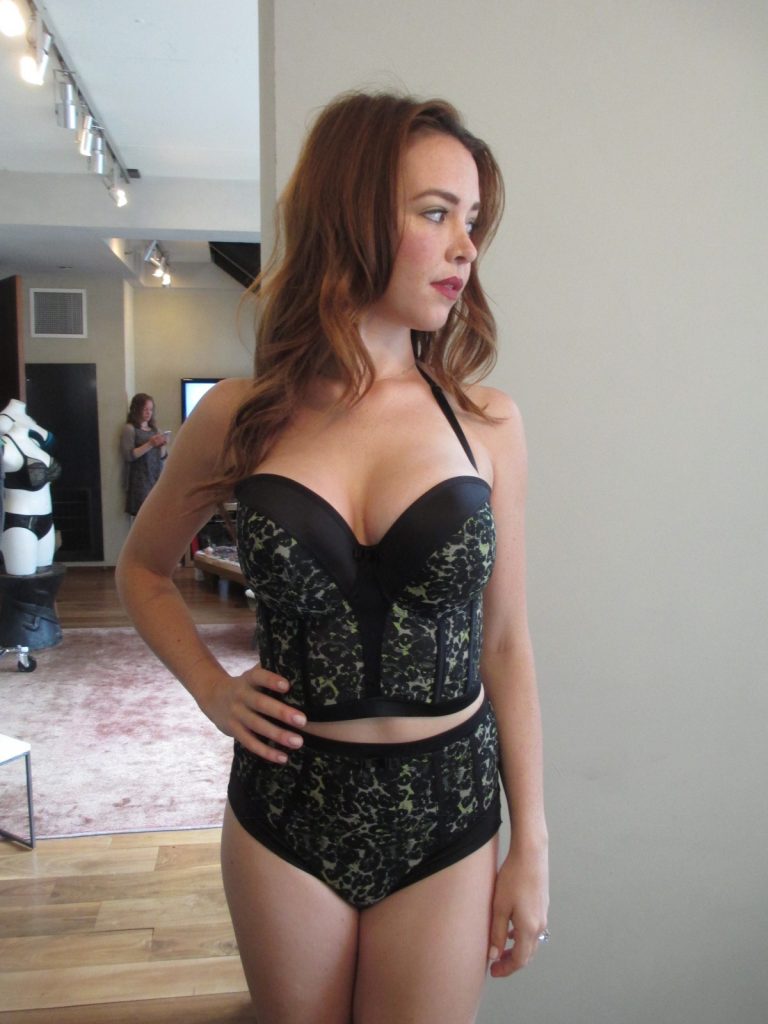 I’ve read blog posts about the Deco longline having the same issue. Instead of lengthening the band, Freya apparently uses the same band height for every size, and cuts deeper into it to accommodate the cups. So the bigger your cup size, the less band length you get.

My second complaint has to do with the boning. I appreciate that there are two pieces of boning for each cup, to keep the band from scrunching up. But the channels are longer than the piece of boning inside it, allowing the boning to shift around and slide up and down. I’m worried that eventually it’s going to rip through the fabric.

Despite a few complaints, this bra is still the best strapless ever (ever!!). In fact, Freya has a similar longline called “Sassy” (see my 2016 spring/summer Curve report) that I will definitely be buying. I may just toss out my Deco strapless entirely!

5 Comments on Off the Rack ~ Freya “Pinup” Longline Bustier Reviewed