It’s been six years since I first wrote about Polish brand Corin, and two weeks ago I finally got to try their bras–one of the perks of having a pop up shop for my big bust button-downs in an amazing lingerie store. (At my next pop up shop, I’ll finally get to try Ewa Michalek at the only brick and mortar store on the East Coast that carries them!)

Before I go into detail about the bras, here’s what I like about Bra Spectrum:

I was especially excited to have a fitting because I’ve gained 10 pounds and don’t fit my 32F/FF bras anymore. Kristin began by measuring 79 cm beneath my bust and 103 cm around my bust and started with a 36F. A lot of fitters do this with me, so I let the process take its course, and eventually we found that most of the Corin bras that worked on me were around a 34F/FF . . . or a 75H if you want the Polish size. For the record, I’ve just measured myself ahead of writing this post, and I measure 33.5″ beneath my bust and 41.5″ around my bust, so a 34F/FF sounds about right. 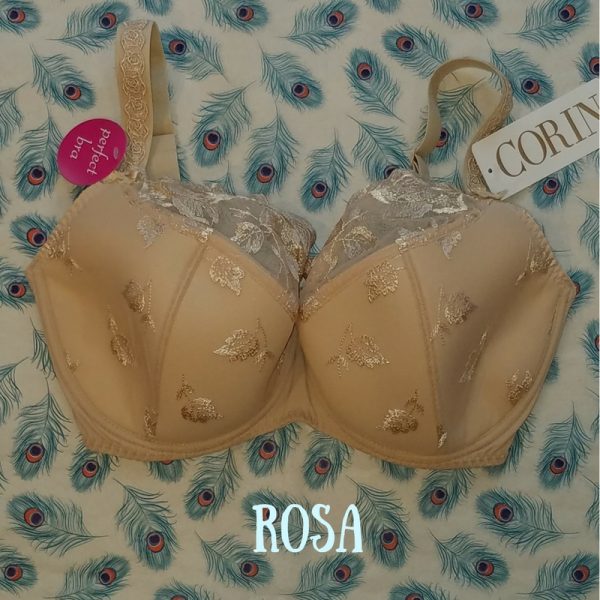 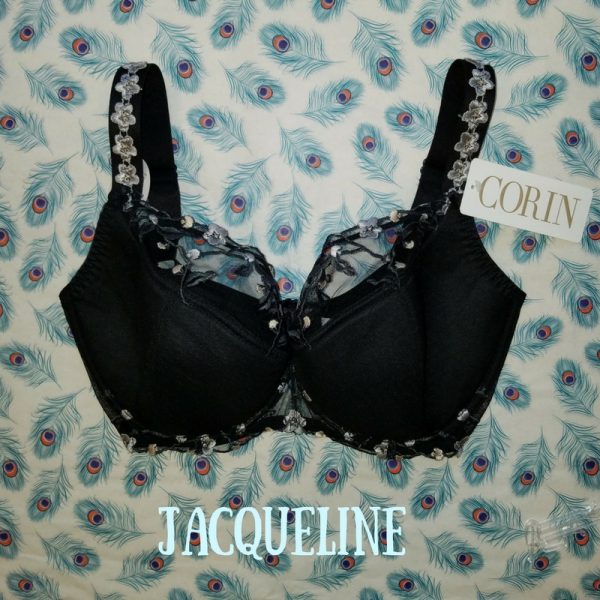 Maybe it’s my imagination, but I felt more contained, lifted and slimmed in the Jacqueline. 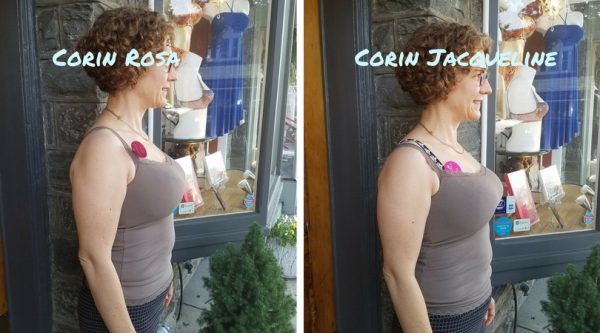 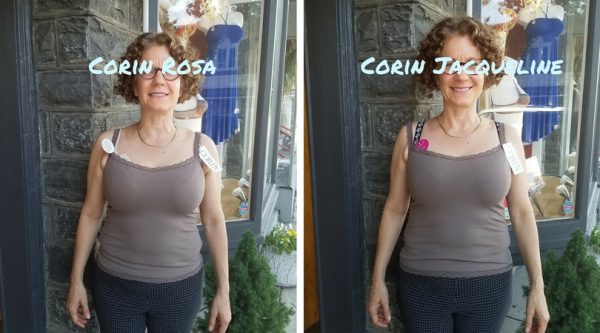 Here’s a comparison of the two bra diagrams from the Corin lookbook. Can the angle of the seams down the front of each cup make such a difference? 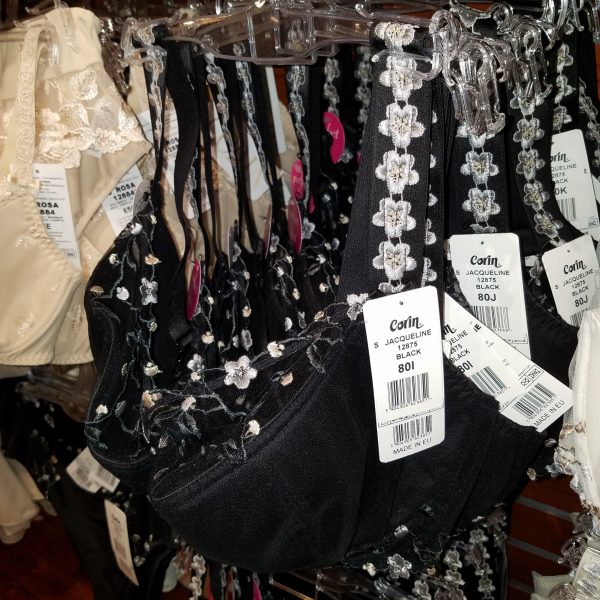 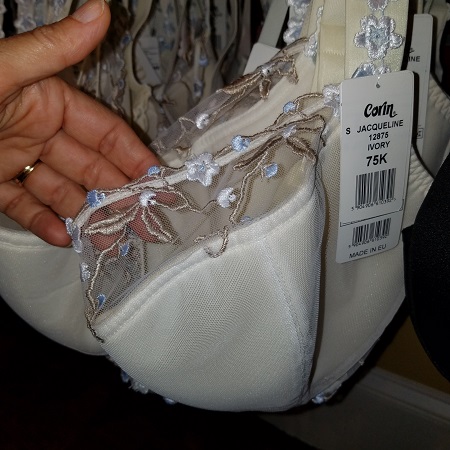 Rosa is available in a 75J and up to an I cup in most other bands.

Both Rosa and Jacqueline are continuity styles for Corin, which means these are the styles you’re most likely to encounter in brick and mortar stores in the United States. Even Bra Spectrum, which is owned by the same entity that owns the Corin distributor in the States, has very limited access to Corin’s “fashion” styles.

Every seamed bra that I tried showed up too much under my white shirts, so I also tried Corin’s popular Virginia spacer, as well as a spacer by the Latvian company Nikol Djumon. For comparison, I wore my Empreinte Cassiopee spacer that has been a lifesaver during my current bra desert. (It shouldn’t fit because it’s a 30G, but somehow it’s working for me on the loosest hook.) 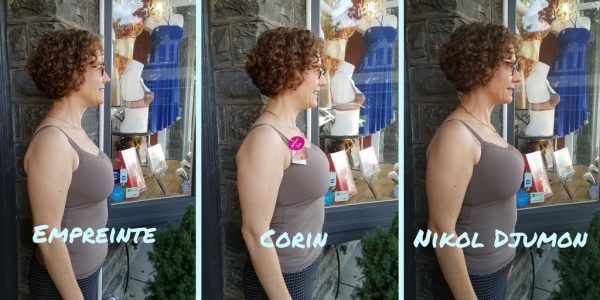 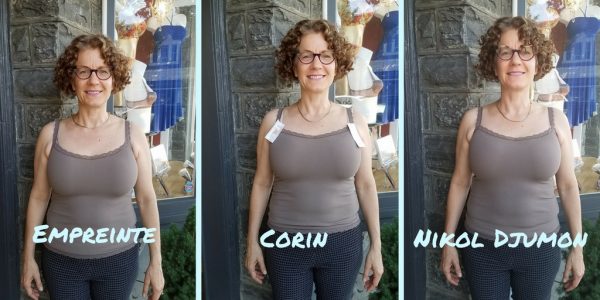 The Corin felt super comfortable in Polish size 80G when fastened on the middle hook and gave amazing coverage. However, my profile in it resembled a slightly smashed capital letter C. The Nikol Djumon, also in an 80G, felt slightly bouncier with its lower neckline, but I much preferred the more lifted profile.

I like that both spacers feature an internal side sling. I’ll report back on available size ranges later.

Earlier I referenced Bra Spectrum’s wall of wireless options, and when Kristin showed me this pretty little piece from Latvian company Nikol Djumon, I couldn’t resist trying it. It felt very secure, and I wish I could try it at home for a full day to see if the band placement stayed as perfectly placed at the crease beneath my breasts as it did when I wore it around the store. The beak-like profile is the trade-off for going wireless, though, so I would only wear it in public under layers or in an emergency. 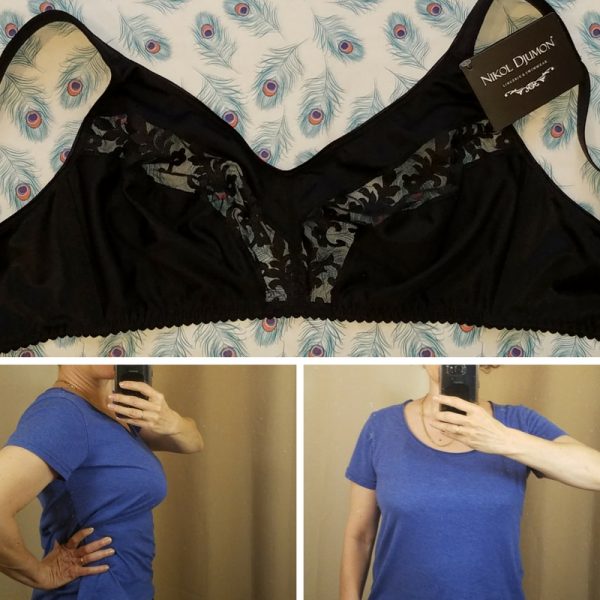 I also tried a couple of 3-part soft cup underwired styles from Nikol Djumon in 75H (the tag said this was equivalent to UK 34F, but my calculations say 34FF), and it looks like H is their highest cup  offering. The side profiles in these bras is slightly less rounded and lifted than the Corin bras, but both feature a generous solid side panel that helps to center the breast tissue and super comfortable thick and padded straps. 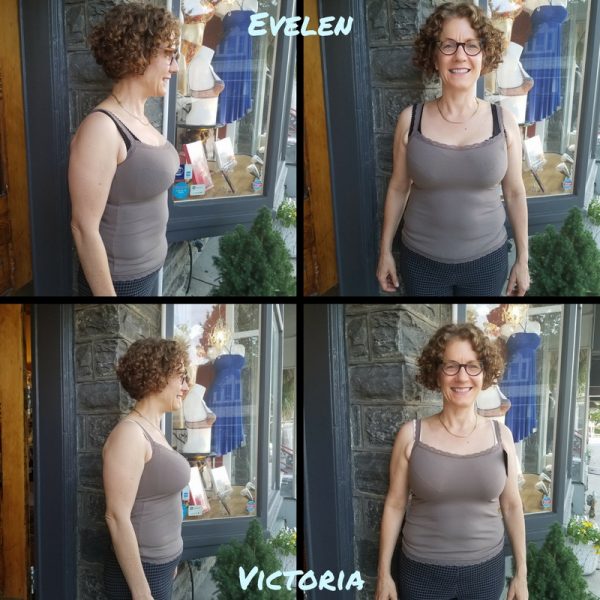 The remainder of the Evelen cups is composed of gorgeous embroidery on tulle, and it comes in beige and black. 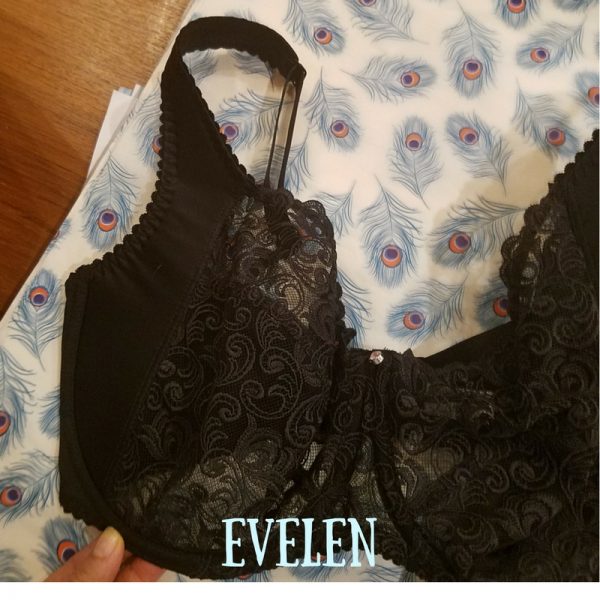 The lace of the Viktoria is found only in the upper panel, and it comes in more colors, including navy, red and the teal you see below. 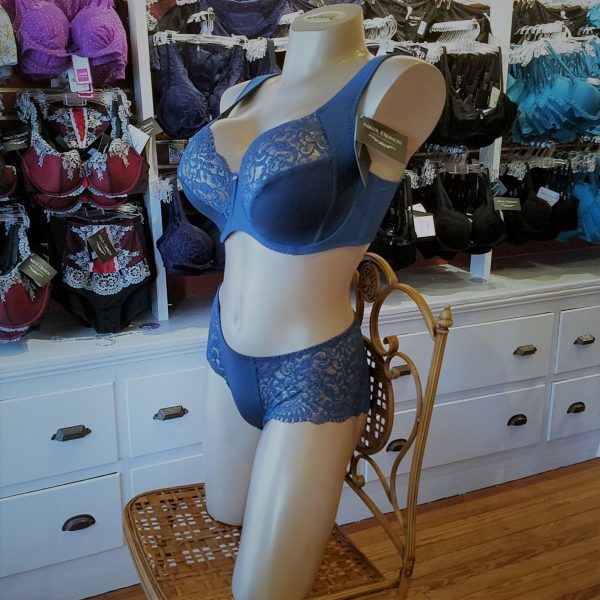 Bra Spectrum doesn’t carry the traditional big bust bra brands from England, and they offer only one sports bra, but it’s definitely worth the trip for a great fitting experience and large bust bras that no one else carries. Don’t live near Bra Spectrum? I’ll try to update this post with a list of stores around the United States that carry Corin and Nikol Djumon soon!

3 Comments on Mission Accomplished: I Tried Corin at Bra Spectrum