If you’ve been poking around the internet looking for resources for large busts, you may have noticed a lot of Polish sites and wondered why. Bruno Balzan, the commercial director for Corin, explained that under Stalin’s centralization of industry in Soviet bloc countries, it was decided that Poland and Slovenia were to produce the underwear. Hence the concentration of bra manufacturers in Poland. Mr. Balzan, who has been in the lingerie business since 1989, was a wealth of historical information (he also described the origins of the balconette and control brief to me). 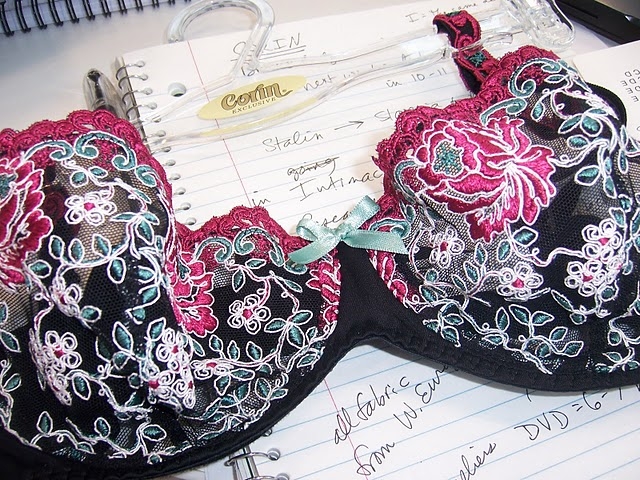 Beside Mr. Balzan’s historical approach, Corin takes a very scientific approach to its bras, building on the research of professors and engineers from Polish universities.  I watched a DVD, filled with 3D models and scientists in lab coats, demonstrating the best ways to support breasts.  Unfortunately, it was all in Polish, but Mr. Balzan promises to send me the English version when it becomes available.

Corin’s fabrics come from Western Europe.  They share suppliers with Lise Charmel, a brand I plan to write about next week.  Despite the same intricate lace and embroidery work, their prices are less expensive.  (I’ll add the price range here once I find it.)  To appreciate the work that goes into fine French lace, you should check out this Wall Street Journal article.  If you can’t access it, just email me and I’ll send it your way.

Corin is currently available in only 10-11 boutiques in the United States, but you will soon be able to find it at Intimacy stores throughout the country.  If you live in or near Ocala, Florida, you’re in luck because Unique Lingerie carries it.  (I met Unique Lingerie’s passionate and caring owner, Edna Turner-DeGeneste, at the coat checkout at Curve and wish I could check out her store in person.)

I hope you’re enjoying this international tour. We head back to France for Lise Charmel next week.