Bralettes are a huge trend right now. Even Victoria’s Secret is advertising them (it’s quite a shock considering their usual marketing strategy of overly Photoshopped push-up padded bras). For some, I’m sure this comes as a relief. Shoppers can finally find a range of wire-free, comfy bras in fun colors and styles.

However, for the most part these are not suited to the big bust market. Many feature cups that are too small, fabric too flimsy, support absolutely laughable. Luckily, though, good ol’ Freya has us bigger-boob’ed gals covered with their “Fancies” collection of bralettes.

I first introduced these cute items in my March Curve show coverage. At the time, I was more intrigued by the other items in the Fancies collection (like the Minx and the longline bras), but after reading some recent blogger reviews, my interest was piqued.

Then I was offered a Fancies bralette set when I attended Eveden’s “70s Dance Party” event this week (more on that in an upcoming post). With my 37” bust and 29” underbust, I have the bralette in a medium. Here’s a chart to figure out your size: 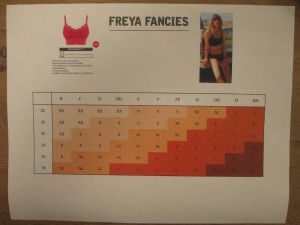 The Fancies bralette features fully adjustable straps, stretch lace trim, and a double layer of semi-sheer fabric across the bust and around the back. It does not have any closure mechanism, which means you pull it over your head. There is gathering under the bust to offer more volume in the “cup” area.

This bralette does not provide lift. So you have to go into trying it with your expectations in the right place. Don’t expect the same support you get from a wired bra, or even a structured non-wired bra. It’s a different beast. I would say the manufacturer’s photo on the Freya site is actually a very accurate portrayal of how it looks on the body: 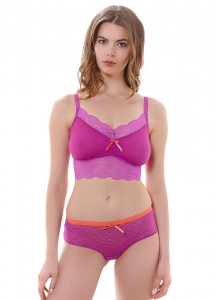 When I first tried the bralette on, I swooped and scooped my boobs up and then let them settle into the bralette. The band rose up a little to rest in my infra-mammary fold. The resulting shape is very close to what I look like in no bra, except that my boobs are being held in front of my body instead of splaying into the east-west position. 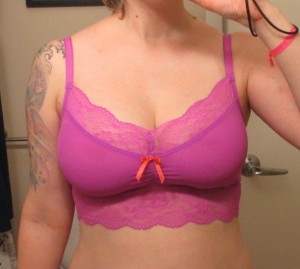 I suppose one could tighten the straps further to attempt just a little bit more lift, but the non-adjustable band was already riding up slightly in back, so I just left the straps alone.

I wore the bralette for a few evenings and slept in it a few nights, and I’m pleasantly surprised to report that the lace band does not roll up like the Freya longline bras I’ve tried in the past.

It’s a comfortable, cute piece to lounge around in (especially in summer heat!), and I get less underboob-sweat than I would with no bra (though the underboob-sweat is definitely still present). Plus, it offers just enough support that I can throw on a tank or tee shirt in the morning to walk the dog instead of having to deal with a real bra (I refuse to walk around my neighbors totally braless).

So now that I’ve got all the gushing out of the way, I do have some critiques. As I mentioned earlier, the band is riding up in back. But there’s no way I could size down, because I wouldn’t be able to get it over my shoulders. In fact, getting it on and off is actually quite difficult. Putting in on, it rolls up around my armpits and I have the hardest time getting it unrolled. Taking it off, it’s simply not very stretchy, so it’s a real beast to pull over my shoulders.

Even though it’s really comfy not to have any hooks, I would trade this feature for the practicality of being able to unhook the bralette to take it on and off.

As for the underwear, well I’m not a huge fan to be honest. The all-lace hipster shorts are adorable, of course. But the second I take a step, they ride right up my butt. In fact, you can see it happening to Freya’s model! 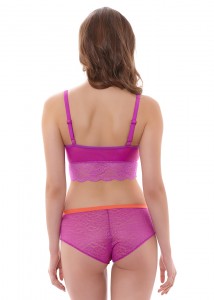 My 29” waist falls into medium on most size charts, and my 41” hips into large. So I went with large this time. Due to the stretch lace, I could have gotten away with a medium. Maybe that would solve the riding up issue? Or maybe I just need a flatter butt for this particular style!