After I reviewed Passionata’s Starlight bra three weeks ago, Passionata’s parent company Chantelle got in touch with the Hourglassy team to ask if we would be interested in coming to see their showroom here in New York. And obviously we jumped at the chance!

It’s always interesting to see “where the sausage gets made,” so to speak, and I also love getting to touch and photograph everything and ask lots of questions. The Chantelle folks were kind enough to pull all their full-bust options for us ahead of time, from the current season (spring/summer 2015) and the next (fall/winter 2015), so I’ll be sharing with you some of my favorite finds.

First up, some highlights from the lovely fitting room:

Now, on to the bras! A note on sizing: Chantelle and Passionata start at 30 in most bras, 32 in some. The largest cup size is a French H, which is the equivalent of a British FF. I’ll list the smallest band and largest cup wherever possible.

Let’s start with the Passionata Bloom bra, which in some online stores is referred to as a longline and in some a demi. It only has a little extra length in front, but it has a very wide band with 6 hooks and eyes, so it’s sort of in between a longline and a demi. I actually have one on its way in the mail, so I’ll be doing a full review eventually. Bloom starts at 32 and tops out at G.

Another amazing color is this “racing green” About Midnight bra. I got to see this one in black at Curve, but I wanted to once again show off how super vibrant the green is. It’ll be out in October: 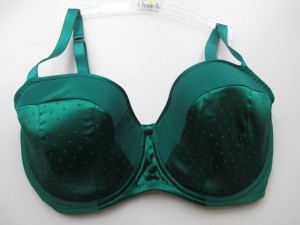 Moving on to parent brand Chantelle, we have the innovative Revelation, which starts at 30 and goes up to H: 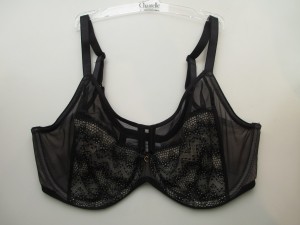 This bra features four parts, stretchy trim along the top of the cup, and a double-layered side sling. Darlene and I appreciated its major functionality and the fact that it’s still mostly sheer and thus quite sexy. I also noticed that it had a conventionally seamed bottom band edge instead of harsh elastic sandwiched between mesh, a feature that I noticed on a lot of the bra models—perhaps a way to avoid the biting in that so many bras inflict?

Here, you can see the four cup parts better. There’s a top, side sling, and a vertical seam separating the bottom portion into two pieces for better uplift: 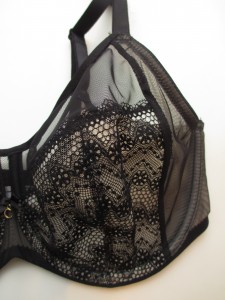 Revelation will be out in August, and will come in the pictured black, as well as navy blue and “suede,” a tan nude.

Next up is the Intuition, which I love for its solid embroidery over sheer base. Anything that looks like a tattoo against the skin is a plus in my book. Here’s the demi in black: 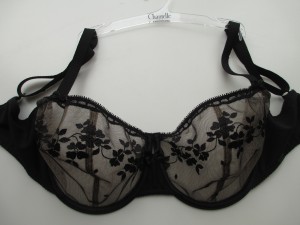 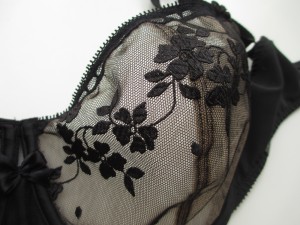 And the plunge in “milk and rose”: 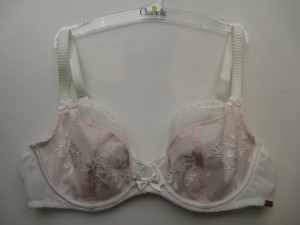 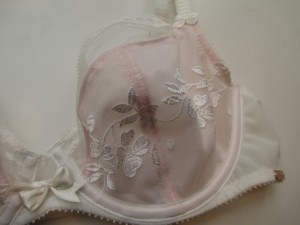 I really love the milk and rose colorway. It’s so unusual to see white embroidery over a colored background, and these particular colors are so sweet and almost bridal.

The Intuition collection starts at 30 band and goes up to H, but I’m not sure if that’s across every style or just some of them (there’s also a molded tee shirt bra with the embroidery on the wings instead). Black will be available in July, a third color—“myrtle blue”—will be out in September, but somehow I didn’t note the release date of milk and rose.

Next we have another inventive creation, the “Illusion,” whose pattern I was told is based on the Chrysler building’s Art Deco details. 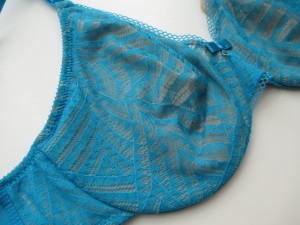 So the interesting thing about this bra is that it’s molded, but not rigid. Rather, it’s soft fabric cups that are a single, seamless, three-dimensional piece: 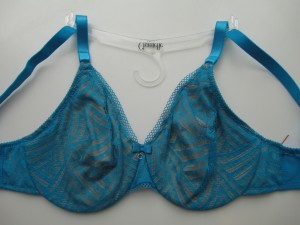 On the inside is tan mesh lining and intense, opaque side slings to keep everything front and center: 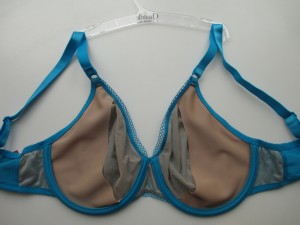 This model goes up to G cup, and will also be available in black, navy blue, and terra cotta.

Moving on to the “Irresistible” three-quarter molded bra: I think this bra could be a suitable replacement for the laser-cut bands and padded underwires that I used to get from Victoria’s Secret. It’s a slightly plunging molded bra where the entire front pair of cups is one piece of fabric: 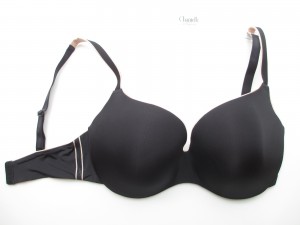 The lining is also one whole piece of molded fabric, with the wire encased between the layers: 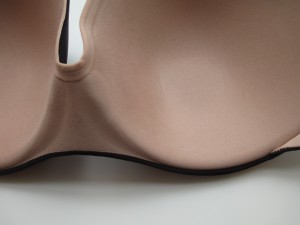 While the band is not actually laser-cut, it does use seaming without pinchy elastic, and the strap is movable in back to two different positions (so it could also be worn as a racerback): 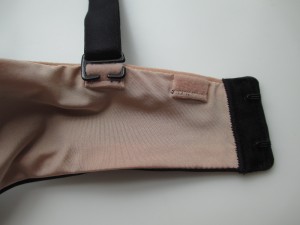 Sadly, the Irresistible stops at G (UK F), which means I won’t be able to try it, since it would mean sister-sizing up two bands to 32G (i.e. UK 32F).

Lastly, we have the holiday Satine bra, which will be out in October: 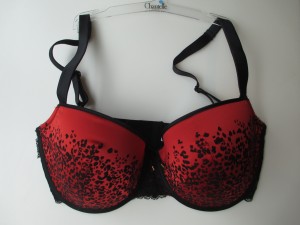 Finally, here’s another, clearer example of that seamed band I mentioned before. Unfortunately, I didn’t take a photo of the front of this bra, so I don’t know which model it is! But I do remember that the inner mesh was much softer and with a smaller weave than the power-mesh I’m used to. I have to imagine it would feel great against the skin: 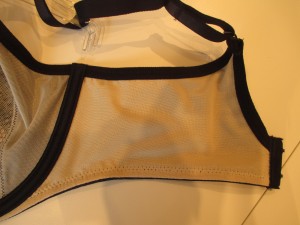 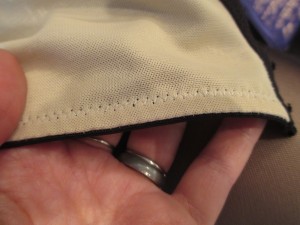 After we were done, Darlene and I realized we’d spread bras all over the table. Oops! Sorry for being messy guests. 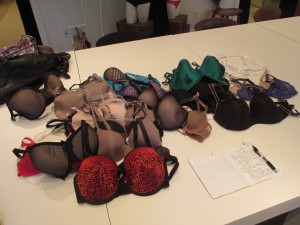 Final thoughts: Even though I would have to sister-size from my usual 28G to 30FF (30H in Chantelle’s official sizes), this is definitely a brand I want to explore further. It’s sophisticated and classic without being old or stodgy, and I think there are a lot of clever details and design choices.

1 Comment on Off the Rack ~ Visiting the Chantelle & Passionata Showroom