I’m really excited to share a review this week that I had wanted to write ages ago, but then the Curve Expo came along and it got bumped. This bra was announced around the time of the previous Curve, which I didn’t attend, and was released this past winter. I first saw it when someone else shared its photo in a Facebook group, and then spent several months scouring the brand’s website until it was finally released. It’s the Starlight tee shirt bra by Passionata (which you may remember from this year’s Curve coverage).

First up, the photo from Bare Necessities (from whom I bought it): 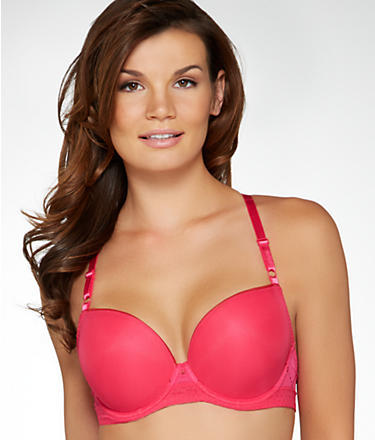 Nothing special, right? Well check out the back:

What?? A T-back bra for large cups? With glittery little stars? Yes please!

I freaking love this thing! Technically the fit could be better on me, but the back is just so awesome and the bra is so useful that I really do not care. Here’s a shot of the back on me: 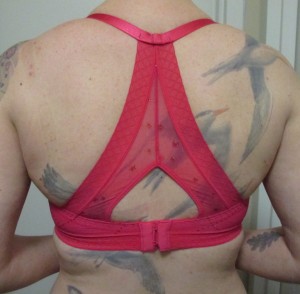 So often, I find bra straps way too wide. They stick out of sleeveless tops, feel like they’re perpetually falling off my shoulder unless I wear them super tight, and cut into my armpits. This construction is an excellent solution. It’s also a great option for wearing under racerback tops. It’s perfect under my Trashy Diva Streetcar dress and my Heart of Haute Ella tops.

Some other aesthetic details before I discuss fit: The band has glitter dots in a criss-cross pattern, and there are more glitter stars on the center gore. The base of the band is also trimmed in the same lace-like fabric as the outer edge of the back piece. The cups are molded foam (non-padded) with an outer layer of mesh, and feature a tiny trim of darker pink mesh on the inside edge.

Sizing is a little tricky in this bra because the brand uses European sizes, which means no double letters, from C to H (and bands 30 to 34). In UK sizing, that translates to a maximum cup of FF. As such, I sister sized from my usual 28G into 30FF. The band has two rows of four columns of hooks and eyes, so there’s lots of possible band adjustment.

As for fit, well let’s start with the good: Overall, the bra achieves a nice, round profile. Not too up-front, but also not minimizing. As a tee shirt bra, it completely disappears under clothing. 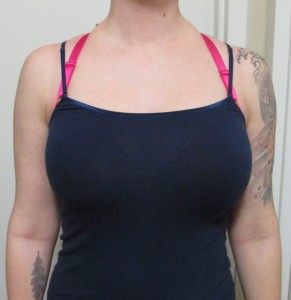 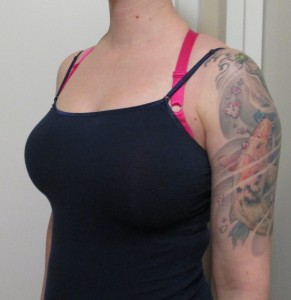 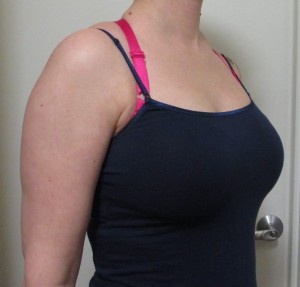 Further, since the straps point toward the neck instead of going straight back over the shoulder, there’s plenty of space under my armpit, so that there’s no digging in or scraping against the arm: 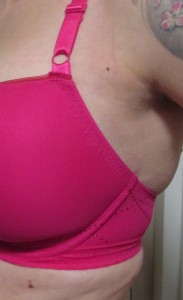 While the wires are only a little wider than I need, the base of the cup is quite shallow right in the center, so it’s folding over on me significantly and pushing the underwire down my ribcage:

Due to this fact, the cups are running a little small on me. But if I weren’t so full-on-bottom, I would say that it runs true to size. The band runs true to size as well. I’m wearing it on the tightest hook in size 30. But since the straps aren’t pulling on the band, I could probably wear it on a looser hook to avoid stretching it out too fast, and still achieve good support with no riding up in back.

I appreciate the fact that the strap adjusters are in the front, because it’s a little tough to figure out the right length the first time you put it on, and this way you can adjust the cups and then adjust the straps while it’s on your body.

The reason it’s difficult to get on is because while the band opens and closes like normal at the bottom, it stays closed permanently up near the neck. So you have to pull it on over your head and wrangle your boobs up into the cups instead of letting them settle down into the cups as you normally would. But it’s only a minor inconvenience, really.

Some of you may be wondering why Passionata didn’t just make the bra a front closure—a true racerback. But I actually spoke with them at Curve, and they said that while it’s something customers are demanding, the support just isn’t there with front-closure in larger cup sizes. It would have to be a super plunge with basically no gore height at all for a front closure, so I guess I understand. Plus you can’t have an adjustable band if it’s a front closure either, and to me that’s unacceptable.

I’m really pleased with the Passionata Starlight, which also comes in “Cappuccino” with neon yellow glitter and mesh trimmed cup edge. I’m definitely interested in trying more from the brand, although it’s rather difficult to find, or at least to find in the complete size range. Some of the few American websites that carry it stop at F or G-cup even in styles that I know end at H, or if they carry H it’s all sold out (Bare Necessities, I’m looking at you!).