Readers, it’s with great sadness that I report to you my Freya Bondi bikini (which I gushed over in my Eveden Curve roundup) does not suit me at all. The fit on top and bottom is just not working, and I had to return it. I made sure to snap a few photos to share first, though. 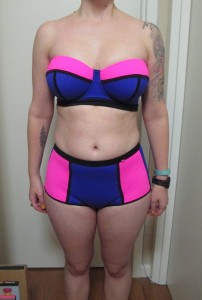 First impression: My husband immediately said “that doesn’t fit you very well” when I put the suit on, and I definitely agree. I feel that I bought the right sizes, but that this suit is just doing me no favors.

For example, the bottoms are supposed to be high-waisted, but on me they hit at a really unflattering mid-rise. The black trim around the waist is also cutting in big time, making my midsection look extra chubby. I have tried Freya bikini bottoms in size large before, though only a lower-rise style, and the problem with large is that there’s too much fabric in the crotch and it bunches up on me and looks weird and feels uncomfortable. The Bondi bottoms already have a lot of fabric in that region that I had to situate just so to avoid having the bottom seam flip and bunch up, so I really don’t think a large would work either. Plus that wouldn’t solve the unflattering rise anyway.

Next up, this is not a longline, despite Freya’s naming it so. It’s maybe a centimeter longer than a normal banded bra would be. I wish it was at least a couple inches longer, to get a more vintage look.

As for the top’s fit, it’s not that easy to see here, but the cups were not very supportive on me. The top of the cup isn’t open enough, so it’s cutting in and I’m getting mild quadboob. From the side, there was a rather sad, slightly droopy shape, as you can see here: 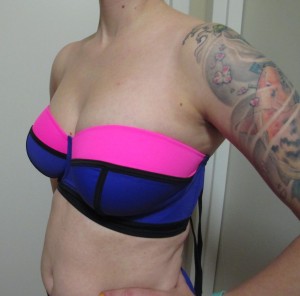 It actually doesn’t look that bad here, but the boob in the foreground is my bigger side and it was really pronounced on that one. I should have gotten a photo from the opposite angle.

There was slight improvement when I added the straps, but not much: 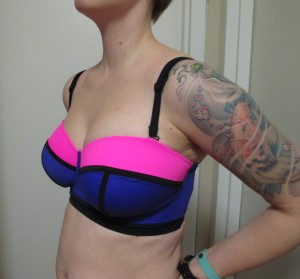 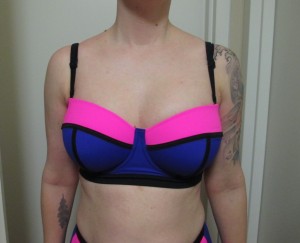 I actually like the way it looks with the straps, but as you can see above, they are way long. I had to tighten them almost as far as they would go. If I’m 5’6”, imagine how these would fare on a more petite lady? I never have a problem with Freya’s bra straps, so I don’t understand why these swim straps are so much longer.

At this point, I might have considered keeping the top and wearing it with black bottoms. I even already own some—Freya’s “Showboat” bikini bottoms in size medium (which fit perfectly and are actually high-waisted, reaching up to my belly button). But there’s one other problem with this top that I just couldn’t overlook: 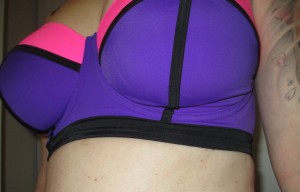 The cups are too shallow! Curses! They’re crumpling over and pushing the underwire down my ribs instead of resting beneath the breast tissue. (By the way, the above photo is a more accurate representation of the color. The purple looks overly blue in my other shots.) This is the same issue I complained about in my Panache Envy review last week. It’s something I’m willing to deal with in a bra, but not a swimsuit where it’s visible to all.

Lastly, I just have to share this most unflattering back view of the whole suit: 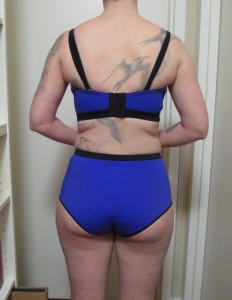 Augh! So much squishy back fat! I’ve never had a bra or swimsuit do this to me. This shot definitely sealed the deal for me that I would not be keeping Bondi. I’m also not a fan of how much buttcheek is hanging out. It felt like a wedgie waiting to happen.

As always, while this bikini is not for me, I still think there are women it would suit much better. I’d highly recommend it for ladies on the shorter side, on whom it may look like more of a real longline and/or real high-waisted bottoms. I think the top would work for ladies who are more average-boobed than me (so not too much projection and not super full-on-bottom or full-on-top). And the bottoms would definitely be better on someone with a less ample back end than I have, or at least someone whose waist and hip measurements are at a smaller ratio than my 29” waist and 41” hips.