In the aftermath of Curve, each member of the Hourglassy team received a sample bra from Panache. This week I’ll be reviewing mine, the Panache Envy in black, size 30G.

The last time I tried Panache Superbra (as opposed to Panache Cleo) was several years ago. I was desperately in need of a strapless bra, and the Panache Porcelain molded strapless was the only thing I could find, as the Deco strapless had not yet been introduced and I was still relatively new to the small-band-big-cup world and just wasn’t aware of any other brands.

The Porcelain was a terrible fit on me: way too shallow and wires way too wide. I used it for the event at which it was necessary, and then I basically wrote Panache off as simply not being the brand for me. But last year I tried a random Panache bra with three-part cups in a brick and mortar store, and was pleasantly surprised at how well it fit. So you can imagine my excitement when a brand rep at Curve offered to send me a sample.

Since I haven’t worn Superbra in so long, I deferred to her recommendation on what bra I should try. I stated that I typically wear 28GG or 30G in Cleo depending on the design, and am currently waffling between 28G/30FF and 28GG/30G depending on brand. She said a lot of people find Panache to run tight (I usually do; most of my Cleos are 30 bands), and since I’m already taking the larger cup in Cleo I should do the same for Superbra. She suggested the Envy as a good starter bra and size 30G. I chose the black colorway in part because black dye tends to make fabric less stretchy, so I thought that would make the 30 band even tighter and closer to a 28.

Verdict: I am a total Panache Superbra convert!

However, I have to admit Envy is not a perfect fit for my shape (narrow root, very full on bottom). But let’s start with the good first! Here’s the manufacturer’s photo: 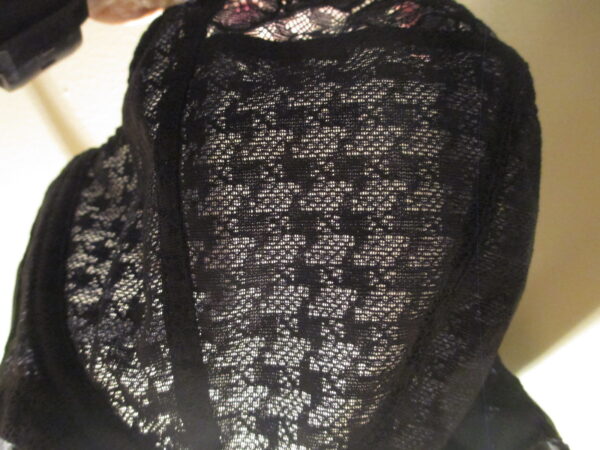 There’s also a detail on the underside that I really enjoy:

The construction—a single vertical seam, a horizontal seam, and a side panel—gives excellent uplift and pulls the breast tissue inward. There’s no east-west look here at all. 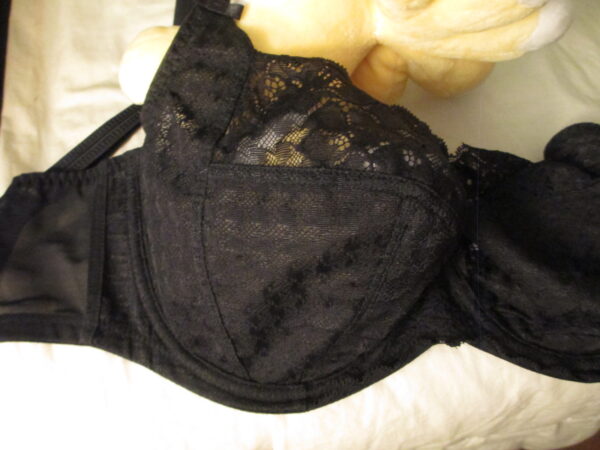 Further, the stretch lace on the top portion is divine. It’s really stretchy yet bounces right back, and feels very soft and not at all scratchy or itchy. There’s no ribbon or sewn hem at the top of the lace, meaning this would be an excellent choice for full-on-top ladies who worry about the top edge cutting in. Plus, unlike a lot of other cut and sew bras I own, I don’t get even the tiniest bit of rippling on my smaller boob side where the lace meets the lower portion (*cough* Freya) or along the center vertical seam (*cough* Bravissimo).

This is perhaps a minor thing, but I also quite appreciate how thin the straps are on this bra. Maybe I’m just used to Freya’s somewhat clunky-looking elastic-esque straps, but these look much nicer.

Finally, I’m really pleased with the overall shape. It’s very round and uplifted, yet has just the slightest downward slope on the upper half of my boob, giving a nice, natural profile.

Sadly, despite all my positive findings, there are some definite fit issues. First up, the 30 band is too big. Right off the bat, I’m wearing it on the tightest hook and it’s still sloping up my back just enough that I can feel it. In fact, when I swapped bras to take some photos of it on me, the Panache band was sitting at least an inch above the slightly red mark where the previous bra’s band had been sitting. The band is really stretchy and comfortable, so I have no doubt that a 28 would be perfect.

Unfortunately, the Envy starts at 30! Of the seven Panache bras from the Autumn/Winter 2015 collection that start at 28, only the Andorra has similar construction to Envy, so that one would be next on my to-try list. (But I really want the houndstooth!) I really don’t understand why Panache’s bras don’t all start at 28 when many of them have similar construction to one another. What is the logic of having half of them at 28 and half at 30?

Moving on, the next couple issues are things I deal with all the time. First, the wires are a little too wide. In this next photo, I’ve got my thumb placed where my breast tissue stops, about an inch in from the wire: 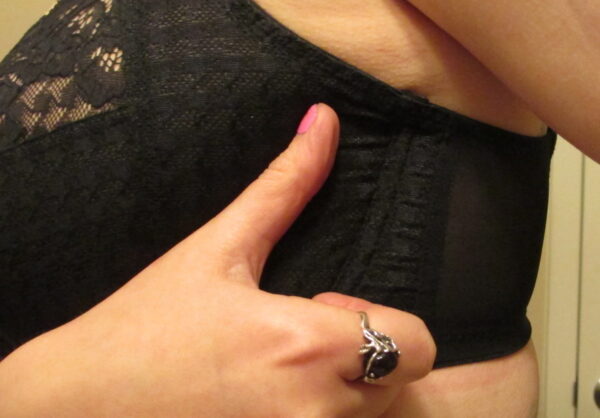 It’s not that big a deal. I still feel supported, and I’ve certainly experienced waaaaaaay wider wires among other brands. But I’d still prefer narrower if I had a choice.

Next is that the bra is slightly too shallow in the base of the cups. It’s causing me to experience the “orange in a glass effect,” meaning my breast tissue can’t squeeze all the way into the cup base, so instead the cup is folding over and the underwire is being pushed further down my ribcage instead of resting directly below my breast tissue.

Finally, and again this is a common issue for me, the straps are set a little too far out to the side for my arms, leading to some chafing along my armpit. You can really see the way it’s digging in when I place these photos next to each other: 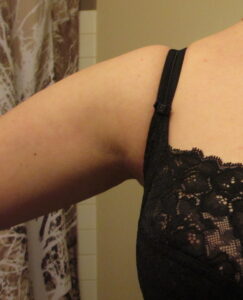 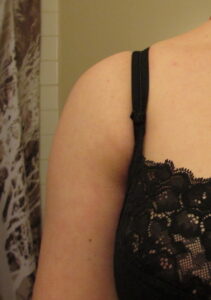 As I said in the beginning, despite these issues, I would still consider myself a Panache convert. They’re all issues that I experience with a lot of brands, but with Panache it’s much more minor. For example, Bravissimo has much worse shallowness (with some models, anyway) and Curvy Kate has way worse arm-chafing due to wide-set straps. I love the stretch lace with a passion and appreciate the attention to detail.

I think ladies who would get the best fit in Panache Envy would be women with fairly average shape: neither super full nor super shallow, neither super wide nor super narrow root, and neither a broad nor particularly small frame. The stretch lace does mean that very full-on-top ladies could do well in the brand, though. I’ll definitely be returning to Panache in the future…but I’ll also only be ordering from companies with a good return policy.

4 Comments on Off the Rack ~ Panache Envy Bra Reviewed