Eeeeeeee I got my Freddie’s of Pinewood jeans! The company is an absolute treasure and I could not be happier with these garments.

First off, the customer service is really great. I wanted the 1940s Button Pants, but my size was sold out, so I emailed Freddie’s to ask if they’d be restocking any time soon. They responded within 48 hours. After I received the pants, I had a question about laundering them, and they responded within mere hours, and continued emailing with me throughout the day.

Second, the shipping is insanely fast. I placed my order July 2, it was shipped July 3, and it was delivered to New York July 7. Are you kidding me?? Things shipped within the US don’t arrive that fast! I was a little put out by the shipping cost of £23.25 (about $40), but I understand denim is heavy and the cost really matches the speed and includes a tracking number. Would I pay less for slower shipping? Ehhhh probably. But it’s not an option, and I love these pants enough that I would pay it again. If only I didn’t have to worry about customs fees, I would order more at once!

Next up, let’s talk price. At first glance, these seem a little expensive at £55-£65 ($94-$111), but that price includes VAT and Freddie’s subtracts VAT automatically for non-European customers! It doesn’t seem to be advertised anywhere, but when I dropped items into my cart and put in the US for shipping destination, the prices were suddenly about 17% cheaper. So these end up costing little more than a new pair of Levi’s, only they fit way better.

Okay, let’s move on to the actual pants! As mentioned, the first ones I picked out were the 1940s Button Pants, which are heavy, 100% cotton twill, not denim. When I first tried them on, they seemed a bit big in the waist and I was really disappointed. I considered washing them in hot water and/or using the dryer to shrink them a little, but they’re dry clean only (meaning I will actually wash them in delicate, cold water). 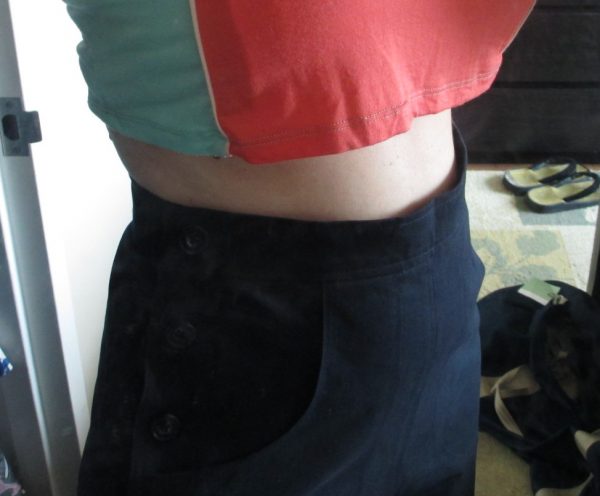 I was going to move the buttons over a little, but ended up deciding against it. I must have been having a skinny moment or something when I first tried them on, because when I put them on later that night they felt better. Leaving them as is also means there’s enough space to tuck in a heavier shirt if I so wish.

These pants are very high-waisted and very wide-leg. Here’s a picture when I first got them and hadn’t put together a real outfit yet, which illustrates it well: 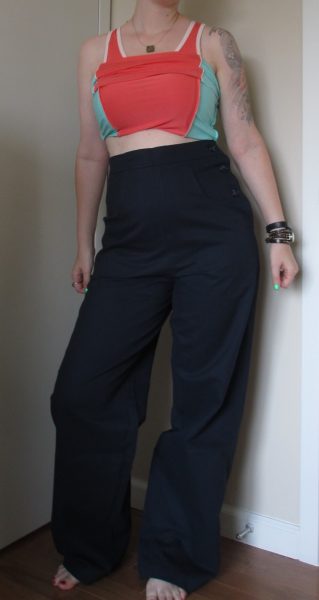 And here’s me in an actual outfit of a loose blouse and chunky platform sandals. It’s a bit more ’70s than ’40s: 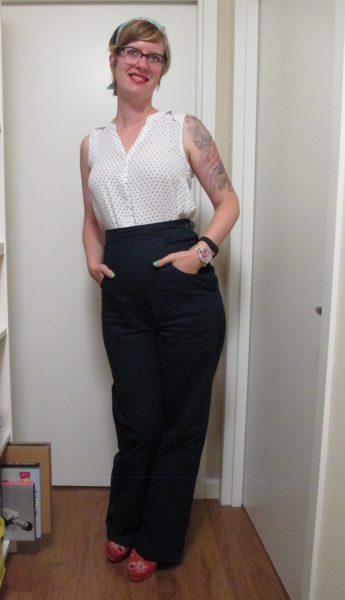 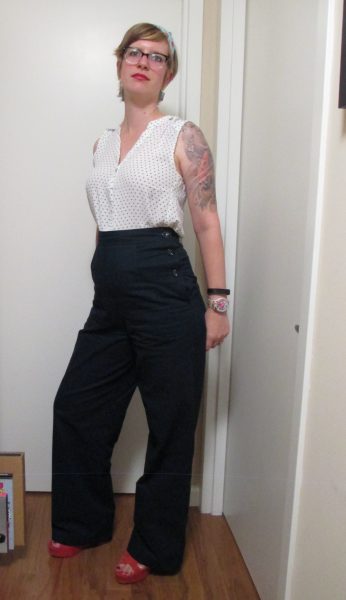 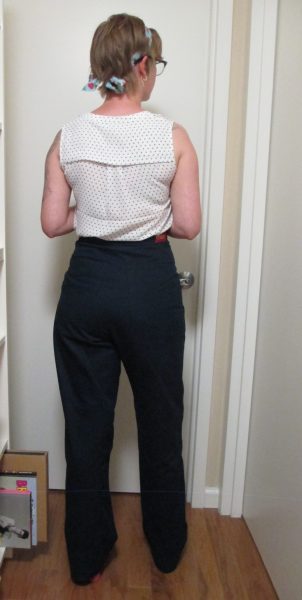 With the bagginess and high waist, these don’t do my rear any favors, but they are so comfortable and I think quite flattering from the front. They make my legs look a mile long and emphasize my small waist. Plus I can pair them with wispy, shapeless blouses without looking like a blob!

Let’s get a couple closeups of the details, shall we?

Next up are the New Jeanies, after which I’ll discuss fit and figuring out your size.

I was initially a little hesitant to get another wide-leg pair, and then I found a photo of a woman wearing the slimmer-legged Jeanies, which looked awesome! They’re a perfect blend of vintage styling but with a modern cut through the leg. When I wore them out, one friend said I looked like I’d been doing some riveting.

The Jeanies are 100% cotton denim and have a super high rise, front placket pockets (again deep enough to tuck away my phone), belt loops, a hidden side zipper, and fairly slim thighs and legs. Here’s a photo when I first tried them on, which shows the height of the waist and length and width of the legs: 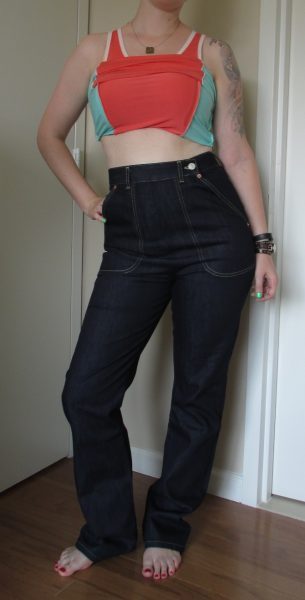 Here are some shots of the jeans as part of an outfit, this time with a button-up blouse and flat shoes (plus a cameo from my puppy!): 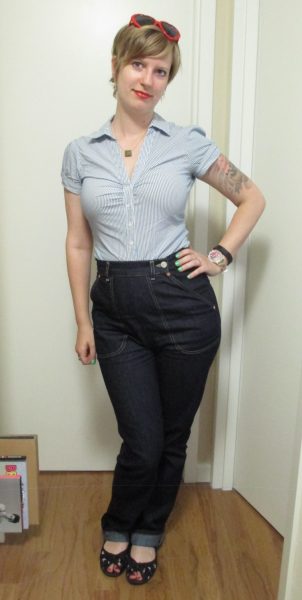 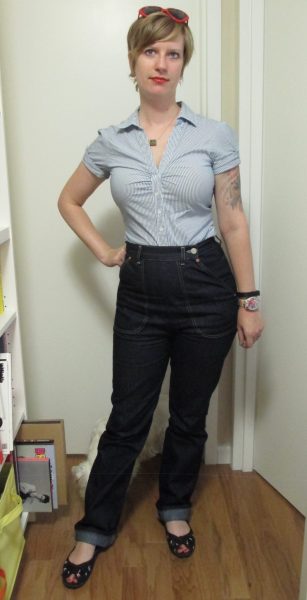 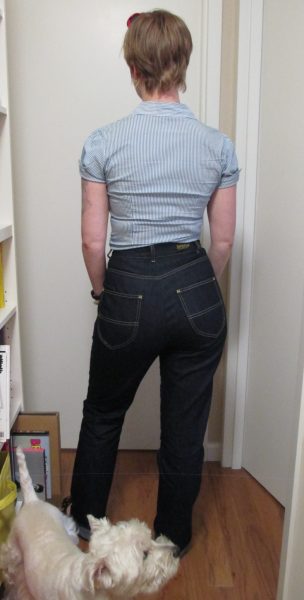 I think these are a lot more flattering on my butt than the much looser Button Pants. Again I found the waist a tiny bit big, but in this case there are two buttons, so I just use the tighter one. 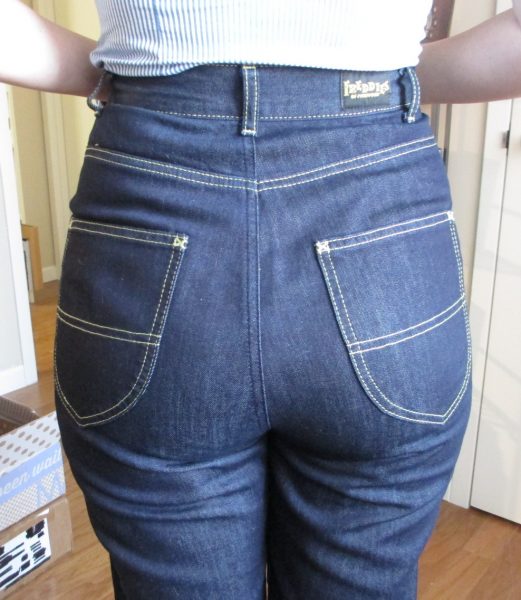 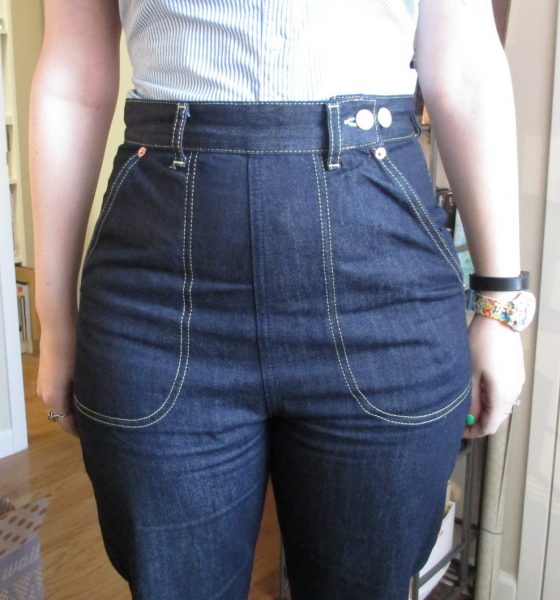 In looking at my outfit photos, I don’t think these even look all that high-waisted, but they certainly feel like it when I’m walking around. In fact, it’s a little hard to bend over, but I’m sure the denim will loosen up with wear. And it’s a small price to pay to avoid plumber’s butt! These are easily the best fitting off-the-rack jeans I’ve ever owned.

The Freddie’s listing notes that these are not so good for curvy girls due to a slimmer thigh, and I tend to agree. Although they’re fine once on, they’re a little hard to pull over my butt. The sizing chart lists a difference of 32cm between waist and hip, and I would suggest ladies with a bigger difference than that avoid this particular style. My difference is 30.5cm.

This brings me to my next point: How to figure out your Freddie’s size! It is super easy. Every single pant has its own size chart right in its listing. It’s more than just waist and hip, though. The charts also include rise, thigh (single thigh laid flat), width at hem, and inseam length. Waist and hip are still the most important, though, so pay close attention to those and don’t worry about the size number.

For example, whereas I normally wear size 28 or 29, based on the actual measurements I needed a 30 in both these pairs. The Button Pants match up to my waist perfectly (74cm) and the Jeanies are 2cm bigger at 76cm. Since denim will stretch out with constant wear, and since I found the waist in both pants could stand to be a wee bit tighter, if you’re between sizes I would suggest sizing down if you are closer to the lower number, but go up if you’re closer to the larger one. If you’re right smack in the middle, you should email Freddie’s and ask their advice.

I can’t wait to place another order! I have my eyes on the Rivet Jeans, the Norma Jeans, and maybe even the Dungaree Dolls overalls. Too bad I can only fit two pairs per order to avoid reaching the US customs limit of $200! Maybe they’ll have a sale at some point and then I can squeeze in three pairs.