At the end of every fall, I wonder why I don’t continue to wear dresses into the cold weather. After all, it’s simply a matter of throwing on some tights to keep my legs warm. A few hours after I throw those tights on, however, I remember why: Saggy Crotch Syndrome.

I love the way that tights polish a look, but once I feel them sliding past my crotch, I feel anything but polished. I feel grumpy and messy.Â  Last October, I felt so grumpy and messy while on the Upper West Side that I took a detour into Town Shop to see if they had any stay-up tights. I was even willing to purchase something from Wolford if I had to. I’d heard wonderful things about them but could never bring myself to pay so much money for something I would probably run after a few wears.

Sure enough, the sales assistant directed me to the Wolford Fatal 80 Seamless Stay-Up in size small. After paying $48, the stockings stayed unopened in my lingerie drawer for the next month because I was afraid they’d be too small and I wouldn’t be able to return them. The size chart said to measure my thigh to find my size, and my thigh measurement said I was a medium. 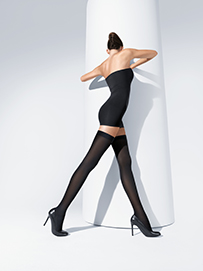 Even after I exchanged them for a medium, it took me several weeks to work up the courage to take them out of the package! My grumpy mood was long gone, and I wondered if I really needed $48 stockings–until I realized that once again I had given up on wearing dresses or skirts.

Now that I have the right tights to throw on under dresses, I should get more wear out of my Urkye Mala dress . . . except there’s another problem–I’ve decided the length looks frumpy on me. I wanted to hem it for today to give you a before-and-after, but I need to find someone with a serger first. Instead, check out this before-and-after photo that I discovered through Already Pretty. It’s given me the kick I neededÂ  to take care of this!