It’s been a long time since I’ve visited Ewa Michalak. After ordering two CHP bras in size 60GG almost a year ago, I decided I preferred the 65G I’d gotten slightly used from Bratabase.

There have been quite a few Ewa bras that intrigued me over the past year, but when I saw the CHP Gazeta, a newspaper-print bra with black and red accents, I absolutely had to have it. With a degree in journalism, I have a thing for newspaper-print clothing. But up until now, the only garment I’ve had is a big hoodie. 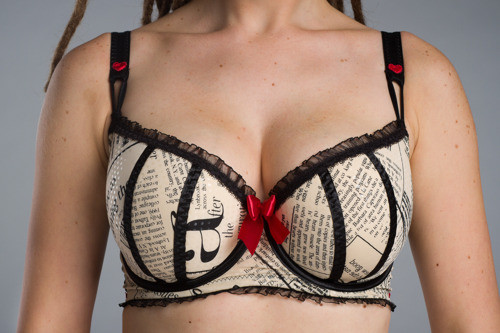 So when the Gazeta went on sale, I snatched one up the very day it became available. Unfortunately, though, I was so eager that I failed to notice a note on Ewa’s site that says it runs tighter than other CHP’s. And man is it ever tight! Even with an extender and worn on the loosest hooks of both the bra and the extender, it still just barely closes. For comparison, my CHP Milady stretches from 24 inches to more than 31. The CHP Gazeta stretches from 22 to a mere 28. (My underbust is 29 inches.)

I attribute this discrepancy entirely to the mesh used in each band. The Milady’s mesh is much softer and stretchier. I actually think the Gazeta’s stiffer mesh is better. Its strength means it gives better support, especially given that it has three rows of hooks and eyes instead of Milady’s two. I also anticipate that it’ll last longer since it won’t stretch out as much and thus the elastic in the fabric won’t be as stressed.

As far as the cups go, many, many people are reporting that Gazeta’s cups run huge. Sometimes as much as two cup sizes larger than other CHP’s. But the cups on mine are exactly the same as the Milady. If I place one bra inside the other, the height, depth, and wires are literally exactly the same.

This cup discrepancy is indicative of Ewa’s complete and utter inconsistency. It seems almost like shoppers are just guessing about sizes and hoping for the best. So far I’ve had good luck, and Ewas are always a quick sell on eBay and bra forums. So it’s not the end of the world if you get one that doesn’t fit since you can re-sell it within your own country instead of shipping back to Poland. But it’s a real pain, especially if it’s a bra you really want.

Anyhow, back to my Gazeta. Aside from needing to wear an extender, I’m quite pleased with this bra. It is, of course, stunning. The print is a saturated black on a warm cream, so it really looks like an old, faded newspaper. There’s also a barely-there polka dot overlay that’s clear and a little shiny. You can’t even see it in photos and can barely see it in real life, but in the right light it possesses a pretty, subtle sheen.

The black trim over the vertical seams is sharp and modern. For an extra dose of femininity, it’s got cute little red hearts on the front of the straps, at the base of the band where the mesh meets the print, and on each side of the hooks and eyes. I’m a little on the fence about the big red bow in the gore, since it just ends up folding in half in my cleavage. But I do love a touch of red amid newsprint. I even use a bright red extender. The small, sheer black ruffle along the top of the cups and the bottom of the band does not show through clothing.

As for the fit of the cups, my usual Ewa 65G fits beautifully. Boobs are lifted and projected just the way I like it. The shape of the top of the cups is more of a balconette on me compared to the slightly more plunge-y look on the model. Ewa really has the market cornered on the “cakes on a platter” look. So if you can get the right size, then I certainly recommend this bra.

Next up is the S Bambino. This is the first Ewa bra I’ve tried that hasn’t been a CHP. I ordered it in my usual size. While the CHP is a vertically seamed cup, the S is a more traditional three-part cup with two bottom portions and one top piece stretching from the gore to the strap. It’s got a slightly shorter gore at 2.5 inches, compared to the CHP’s 3. 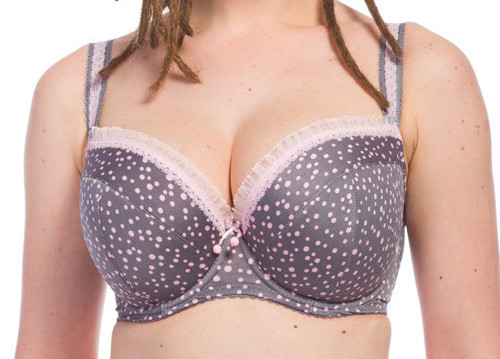 S Bambino has two rows of hooks and eyes, and wings made of fabric lined with mesh instead of just plain mesh. I definitely prefer wings like this, both for aesthetic reasons and for the strength and support it provides. I strongly prefer three hooks and eyes, though. The band seems like a standard length and stretchiness (no extender needed this time!).

In terms of profile, the S gives a slightly more pointed shape, but still very round around the outside of the breast. The cleavage is more squished together than in the CHP, but not as much as a Freya Deco. The straps are also placed slightly more inward in the front, which is great for me since it avoids cutting into my armpit.

The S has the wonderful innovation of pockets in the cups for little “cookies” to be placed (which come with the bra). I put one in the side of my smaller breast, and it makes me a little more even. You could also use both cookies for extra oomph overall, but it’s quite subtle so it wouldn’t really be much. I think it’s better suited for evening things out. What a fabulous tool!

As for the look of the bra, well I just love it. Pale pink against dusky grey is not a color scheme you see every day, but it’s so pretty and girly yet not childlike. I love that the dots are not perfect circles or all the same size or in a repeating grid pattern. The tiny bow in the gore is also much more my preference than the huge Gazeta one. Plus it has a tiny bead and pom-pom on the end of each string! The bra is so different and it’s right up my alley. A+ Ewa!