Quick bra review this week. I took home three bras from the Big Bust Clothing Swap last month, but they’re all different brands so I want to keep them separate. First up is the Freya Piper longline. 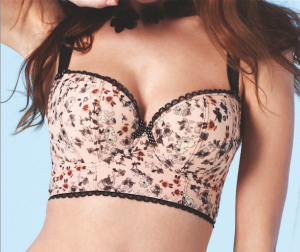 I loved this bra when I first saw it at Curve all the way back in February 2012, then liked it even more when they presented a bright blue one at Curve this year.

I was at an Eveden event recently and got another look at the blue Piper, but it was a more muted blue than I remembered and I decided maybe I didn’t love it quite as much as I had initially. Since the tan one started at only a 30 band and was from a previous season, I figured I would just not end up with one at all. But then Miss Underpinnings brought a tan piper in 30G to the swap, so I snatched it up.

Even though it’s a 30 band and I normally take a 28 in Freya, the fact that it’s a longline means it doesn’t ride up in back. So that part was successful. Additionally, I’ve always taken a cup size up in Freya’s padded half cups compared to their balcony bras, so the 30G (instead of my usual 28G) is just right. The cups are just a touch shallower than the brand’s balcony bras, but not enough that it bothers me.

As with most half-cups, it’s quite open on top, a boon to full-on-top women. It also creates a very rounded, perky, projected shape—my favorite silhouette.

The pattern, obviously, is darling. And I like the black straps and trim, which give it a bit of an edge so it’s not too sweet.

However, I do have one complaint, and unfortunately it’s a big one: the band does not stay down. Here’s what it looks like when I first put it on:

And here it is after a mere five minutes of walking around:

WTF Freya?? It’s so smooth and comfortable when I first put it on, but it pinches in terribly when it’s all bunched up. I find myself unfolding it all day long. Then I end up pulling it down on my body. Then I have to yank it back up to get the cups back into place. It’s so annoying!

Freya really needs to start adding vertical boning to the bands of their longlines. There’s no point in it being a longline if it’s just going to roll all the way up!

There’s also the issue of there being only two columns of hooks and eyes. There are six rows, which is great, but why on earth would they remove a column?? All their other bras have three columns, including the padded half-cups, which have the same cups as the longlines. I just don’t understand the logic here.

Unless Freya makes a design that I just can’t live without, I will not be buying any of their padded half-cup longlines until at least the rolling up band issue is fixed.

5 Comments on Off the Rack ~ Review of Freya Piper Longline