I’m a little late to the party here, but quite a while ago Parfait by Affinitas announced they’d be expanding the size range of some of their bras—the ever-popular Charlotte Padded Bra, the Sophia Wire Bra, and the Alexis Babydoll—to include a 28 band and cup sizes (UK) GG, H, HH, J, JJ, and K.

Since I find Parfait to run small in both the cup and the band, this was pretty exciting news. The Charlotte bra has long been one of my favorites, but after bumping up from a 28FF to G years ago (or a 30FF to 30G in Parfait), it wasn’t working quite right on me. It was small enough in the cup that it wasn’t particularly comfortable, so I eventually (and with great disappointment) resigned myself to not owning this gorgeous bra. 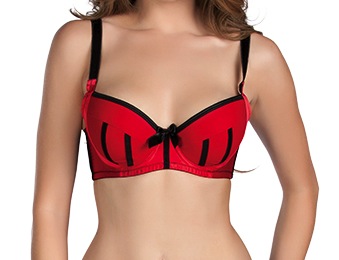 As soon as I received the press release about the new sizes in my inbox, I immediately reached out to Parfait to get myself a sample in a bigger cup. I had read in the blogosphere that the bands, which previously ran at least a size small (and in the case of Charlotte, I’d say nearly two bands small), would now be closer to “true to size.”

I asked Parfait about this and was told: “The sizing of the existing sizes will remain the same. When we expand sizes, we do not change the sizing. We add additional sizes based on the existing fit to offer a popular garment for additional customers.”

So I went with 30GG. I wondered if I ought to actually try a 32 since I found the 30 so tight, but really wanted to check out the new bigger cup size, so I stuck with 30.

So the band is certainly an improvement even though the Parfait rep told me it’d be the same, but pretty much everything else about this bra is actually worse on me now than it was before.

Here are the other notable differences when you jump from 30G to GG:

I know some ladies like the additional row of hooks and the extra-wide straps, but I personally hate them. It makes the bra so much bigger all over when all I wanted was bigger cups. The straps in particular look laughably clunky in my opinion.

Naturally, the gore height, wing height, and wire length will be bigger in a bigger cup size, but there is such a difference that I simply can’t wear the bra. It is digging into my arms so much that if I’m not standing perfectly upright with my shoulders thrown back, then my arms push the cup edges forward so they’re floating away from my body with empty space between the breast tissue and the cup.

It’s also incredibly uncomfortable. The straps start so far into my armpits that it feels like they’re going to saw off my arms. You can visibly see the straps curving in from my arms then back out and up to my shoulder. Here is my extremely slapdash Photoshop of what it looks like on me: And as is so often the case for me, the wires are a little too wide and the cups a little too shallow at the base. I’m really disappointed, especially since the next two Charlotte colors—a dark blush and a bubblegum pink—are so gorgeous.

I always hope the depth will increase when I go in cup size, but so often it seems there’s just more width. What about projection?? My breasts do not wrap around the sides of my ribcage, they stick out.

I guess this is just another Parfait bra I can cross off my wish list. But knowing me (and knowing their vast array of styles), I’m going to keep trying them. After all, I adore my Arabella longline, and I’ve had my eye on their purple with pin dots Celine since I first saw it at the CurvExpo in February. As part of the Autumn/Winter 2013 collection, it should be coming out any day now!