I’m starting with Mimi Holliday because I don’t have that much to say about the brand, just a lot of photos (as usual). However, I will say that they were especially helpful this year, whereas in past years they’ve been very unwilling to talk to me. Adrine, from their distributor Absolutely Lingerie, let me have a tabletop for photographing the items I liked and emailed me the full catalog after the show since they didn’t have enough to give me one there (again, as usual—they should really bring more of those things).

Adrine told me their new season is “fun and flirty,” and that’s exactly how I’d describe it. Lots of girly colors and combinations with a little less overt sex appeal than I’ve noticed in the past. Sizes range from 28–40 A–GG depending on the particular bra. Here are my favorites:

The one thing I found at Mimi that I wasn’t crazy about is their new swimwear line. It was all adorable, but didn’t seem practical in the least. The tops and bottoms only come in XS–XL. That means no cup sizes despite the fact that the tops are underwire. Additionally, it’s made of what appears to be a cotton blend with velvet trims. I’m not sure how well that’d stand up in the water. Still, they are cute if you fit into them and plan on doing little more than sunbathing: 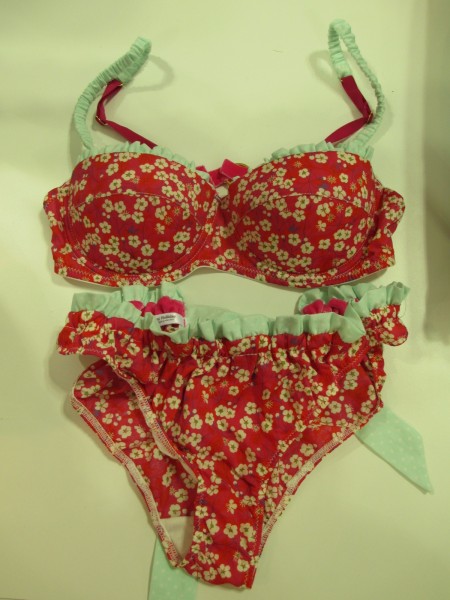 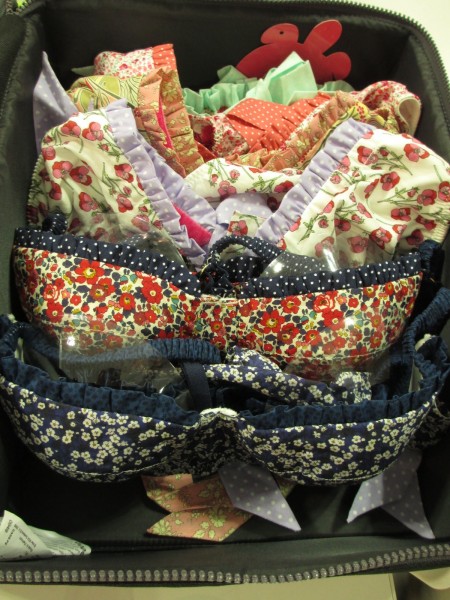 Next up are my go-to Eveden brands. Honestly, I wasn’t that into the new items, but there are a few standouts. Freya is really concentrating on the Deco line, almost to the detriment of other new pieces. There are four new Decos coming out, in addition to the Deco Shapewear (now in black) and Charcoal being added to the continuity colors (how about a brown so women of color can wear a “nude” Deco?).

To be fair, some of those new colors are pretty awesome, including a slightly bluish Kelly green (“Jade Hatty”) and this cool silver number:

And here’s the new black colorway for the Deco Shapewear. It still has that subtle monochrome floral panel in the center, which I particularly like in black—it looks like smoke. 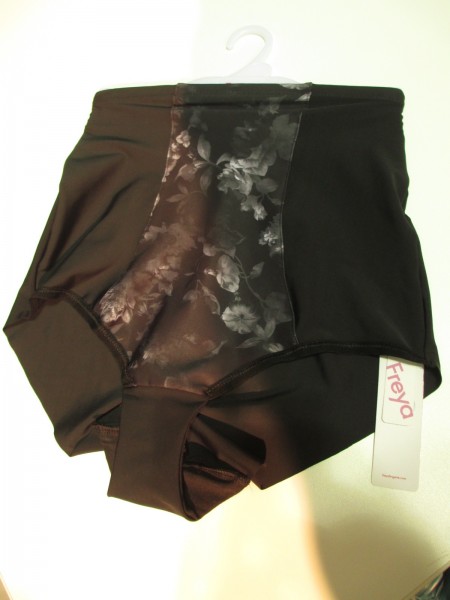 (EDIT: The next two paragraphs are apparently incorrect. I’ve been informed that Freya will be releasing all longlines and half-cups in 28. Since the catalog is printed long before the show, it’s apparently not always totally accurate. The price sheet would have been accurate, but no one gave me one. I’d also like to note that I’ve asked about 28s in half-cups and longlines the last three Curve shows and each time was told there were no plans to add 28s to half-cups. I also noted this time that I was disappointed to see only random 28s in longlines and half-cups, but the Freya rep, though very sweet, was apparently unaware that they all do actually come in 28, so she didn’t educate me as such. Freya, get on your game!)

Unfortunately, Freya is still not making all their longlines in 28. Why?? Totally Tartan starts at 28, there were multiple ones that started at 28 last season, why don’t Flourish or Piper do that? It makes no sense!

Okay, moving on… Here is the plunge look for Totally Tartan. I’m nuts about the current pastel iteration, but this red, grey, and denim blue mix is equally lovely: 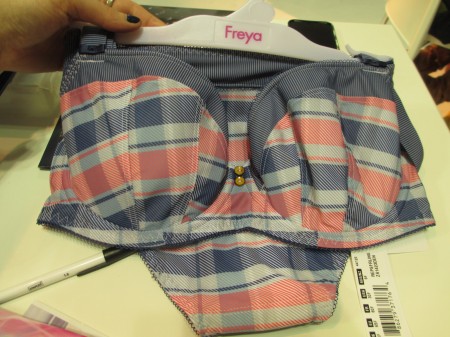 And here is Freya’s first bra with side support panels, Marvel. I’m really looking forward to trying this one, as it’s a totally new shape from Freya. The size range is pretty impressive too at 28–38 D–H: 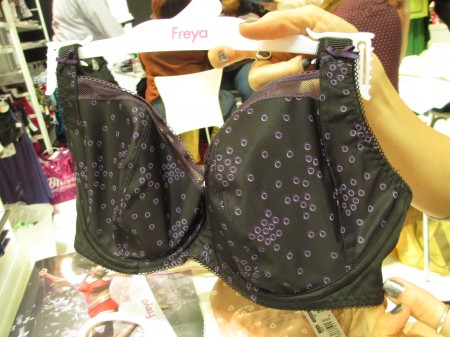 Fantasie was also a little disappointing. Will they ever add 28s to their repertoire? Their cups fit me perfectly and I love the shape they give, but I just cannot abide their 30 bands. They’re too big on me and the one soft-cup Fantasie bra I own in 30 stretched way out very quickly. Still, I did find two items I quite liked:

I wasn’t all that into Freya or Fantasie’s upcoming swim offerings either. Too many dated floral prints and no innovative shapes. However, Freya’s Cha Cha bikini was one exception—it could really give Victoria’s Secret’s “sexy” suits a run for their money, though it ever so unfortunately only goes up to FF (one cup too small for me, damn you!): 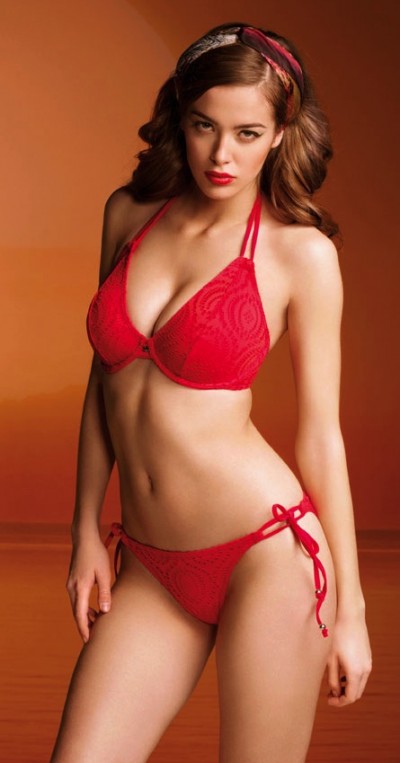 Our other old friend, Panache, gave me a similar feeling as the House of Eveden—nothing really spectacular. Still, here are some highlights:

From the plus-size Sculptresse line comes this polka-dotted beauty, Bellise:

And I quite enjoyed Rosie, as well: 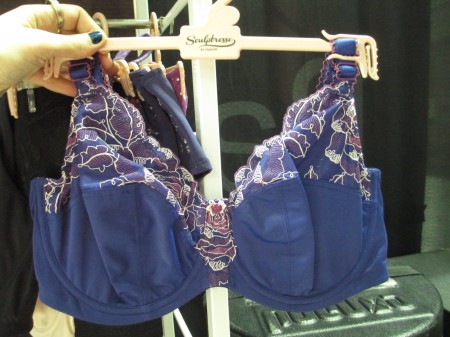 I think this cool rosette (on Rosie, natch) is a perfect example of what sets apart the A/W Panache collections—great little details: 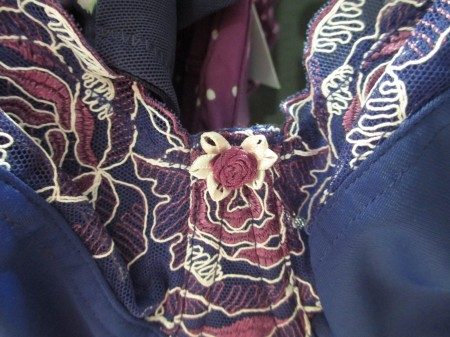 Next is the new sports bra colorway. They’re calling it “Raspberry,” but I’m calling it a clashing mess. Fuchsia, lime, and dusty purple? No thank you. 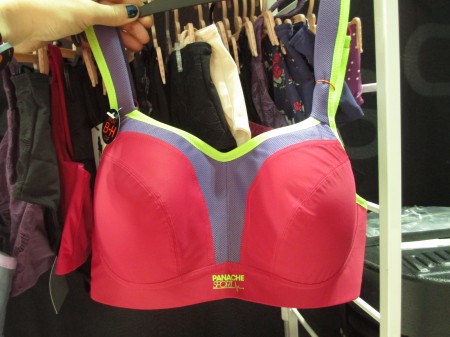 I much prefer the red-orange colorway with smoky grey accents: 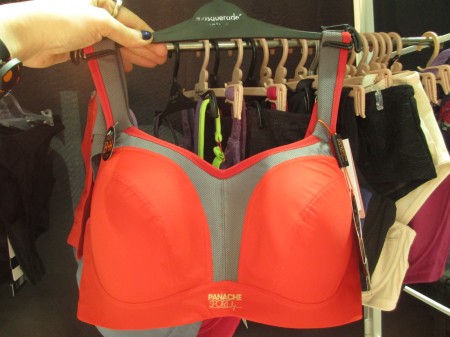 And the new matching briefs (not meant to be worn alone, according to the Panache rep). They also make a thong, but ouch, that is not what I want to be wearing while working out: 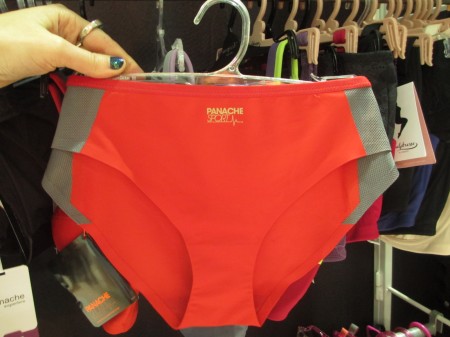 Panache has also introduced a new one-piece swimsuit based on the sports bra design (optional J-hook back and all): 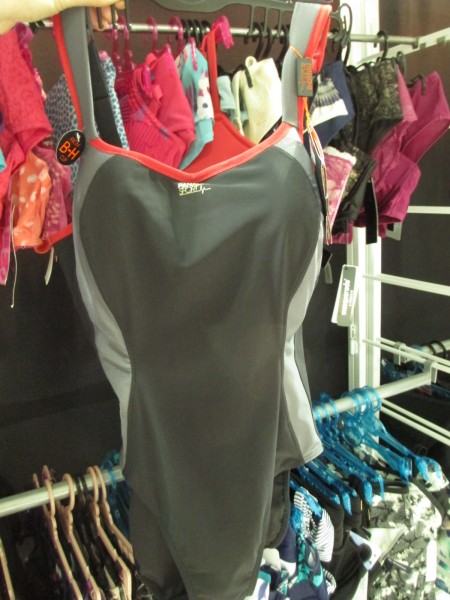 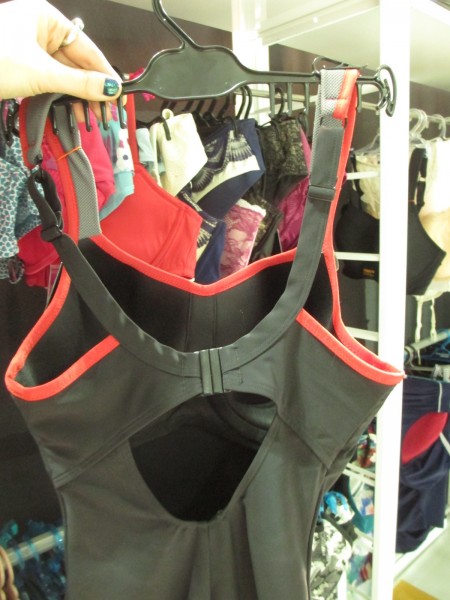 Once again I wasn’t enthralled by the bikini offerings, though I did enjoy this simple teal number, Isobel (I just can’t say no to teal!): 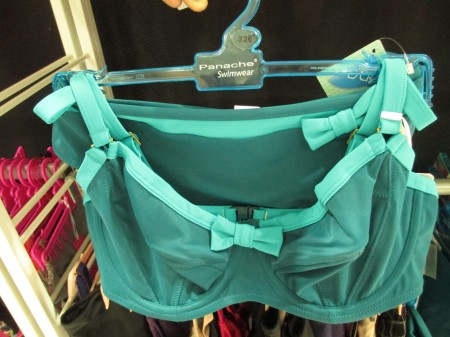 Then comes Cleo. This season’s patterns just don’t hold a candle to the lively, bright, fun patterns of last year. But again, the attention to detail is much appreciated:

The Cleo that’s giving Lori a run for her money as far as my favorite is the new Lucy colorway. I’ve wanted to try Lucy for a while, but I’m not usually a fan of bras without a band below the underwire. This color combination is just so amazing, though, that I may finally have to give Lucy a shot: 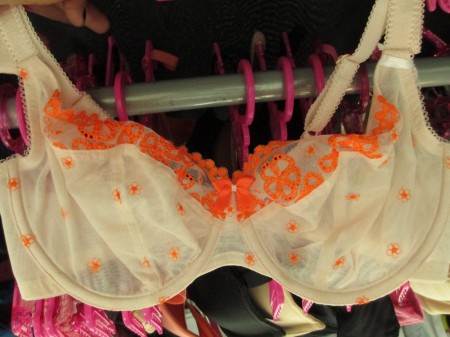 I’ve been a little disappointed with the fit I’ve gotten from Parfait in the last couple items I tried. When I was wearing their 30FF, it couldn’t have been more perfect. But when I grew and bumped up to their 30G, something seemed to be just slightly off. Some of their new colors are so saturated and wonderful, though, that I’m going to have to keep giving them more tries.

First up is the full look at Photo G from my preview post two weeks ago: 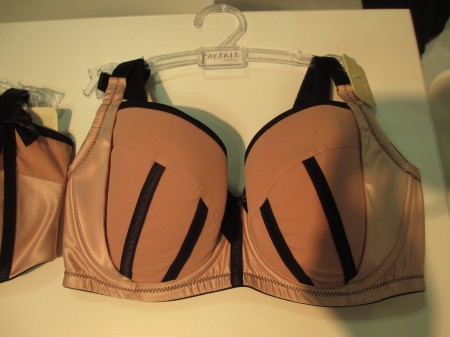 It’s a new Charlotte color! Finally! I quite like this dark blush shade and I think it would look good on lots of skin tones. I’m also happy to report that the red Charlotte (which I still haven’t replaced since bumping up a cup size) is a continuity color, so it’s not going anywhere.

The next item I really enjoyed was the new “purple and lilac” (it’s really more of a wine and silver, if you ask me) Danielle. How gorgeous is this color? 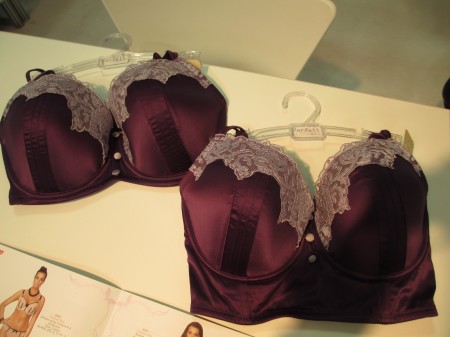 Here are a couple more items I enjoyed:

The one item I absolutely plan on buying, though, has to be Celine. It’s a dead ringer for Panache’s Sculptresse Bellise! I was so excited to see this one, since I can’t wear the Sculptresse line. I love these pin dots and the perky color: 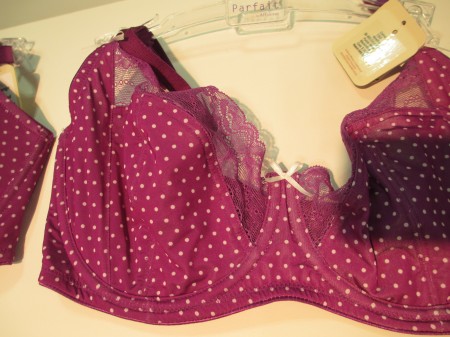 It also comes in black, and both shades are featured in an underwire camisole that was too cute on the model: 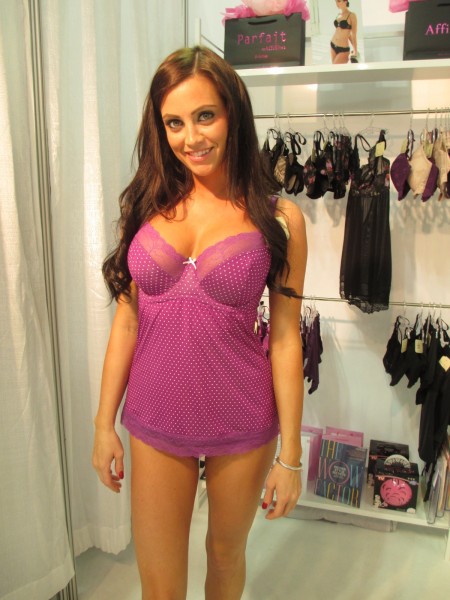 Oh Claudette, how I love thee. I’m so, so excited for their 28 bands to be released this spring. It’s only a month or so away!

The ladies at the Claudette booth were so friendly and so obviously excited about their product, it’s really wonderful. They gave Darlene and me lots of news and some behind-the-scenes knowledge.

The company has received lots of feedback and they’re really taking it to heart. After complaints about the bands being too loose, they’ve been tightened up some. The wings of the Dessous bra will now be double-mesh instead of single. As of Fall 2013, the Dessous mesh will be softer too. The stiffness was due to the laminating that helps increase support, so apparently they’ve improved on the lamination.

Now that the brand is fairly well established, they’ll be expanding into more stores, including Anthropologie. Of course stupid Anthro wo’t be carrying the “weird” sizes (i.e. small band or big cups), but it’s good news that Claudette is becoming more easily available. They’re still too small for traditional department stores, but maybe some day.

I was a little disappointed to hear that Claudette will never sell directly to consumers through their own site, since no retailers seem to carry the complete line. But there are good reasons for it—it’s a ton of work and would require new fulfillment and customer support branches that the company is too small to integrate, and it’s really important to them that they cultivate excellent relationships with retailers, including not cutting into their business. The good news is that Claudette’s list of boutiques and online retailers on their site gets updated twice a year, so you can be sure it’s always up to date with the current season of garments.

GG to K-cups are still just a vision on the horizon, but they are working on it. New additions have to be made slowly, no less than one per season, sadly. Swimwear and loungewear are also in the works.

Now on to the fun stuff—photos! First up is the full view of Photo A from my preview post: 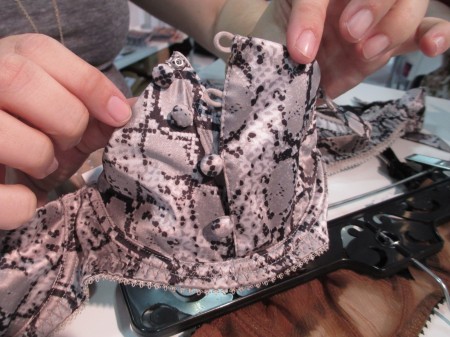 It’s button-up bra cups! It’s called the “Ouvert” set for good reason: “Ouvert” is French for “open.” And if you think that’s naughty, wait until you see the matching panties: 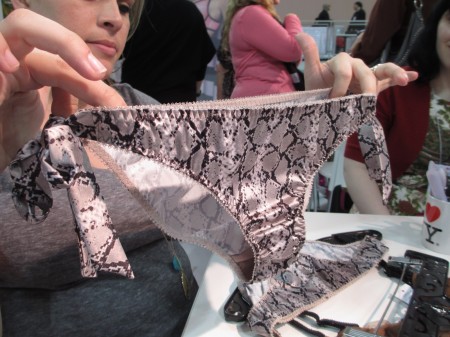 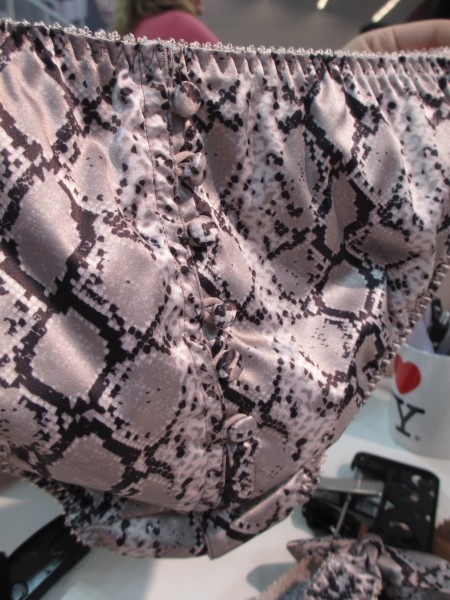 They’re…ahem…open in the crotch, and they button up the back. I kind of love it. When closed, it looks like a pretty, classy set with classic button detail. But then you realize that the buttons are actually functional, and it’s a pretty racy little number (though I wonder about the comfort of sitting on those buttons). It also comes in a lovely royal blue and rich purple: 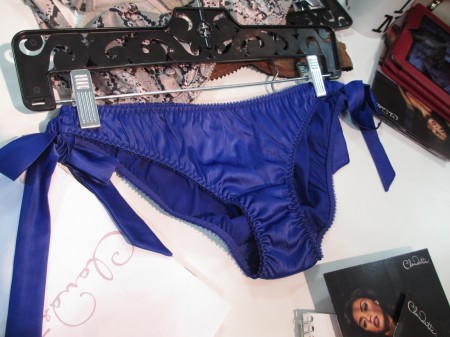 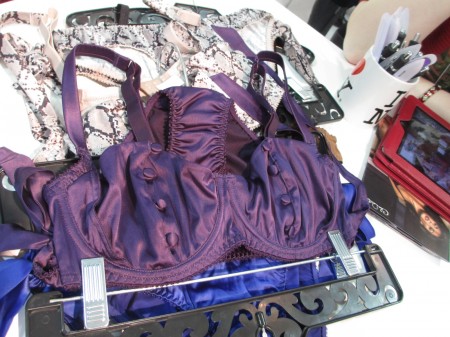 One thing I really appreciate about Claudette’s upcoming offerings is how well they all complement each other. Here you’ve got a pile of items of different styles and colors, but they all look nice together, so you can mix and match with whatever’s most comfortable: 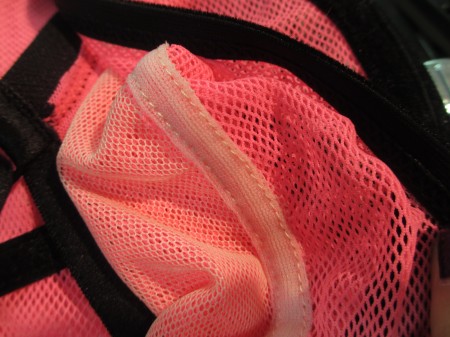 It’s a closeup of the inside of Claudette’s newest creation (and the one I’m most looking forward to trying), the Fishnet collection: 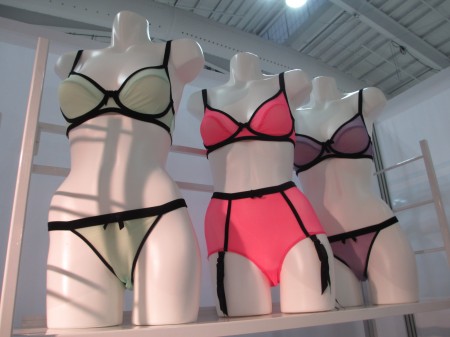 Are they gorgeous or what?? I got a taste of these a few weeks ago and am just in love now that I’ve seen them in person. I’m actually less interested in the pink now that I’ve seen it’s a neon instead of the pale pink it appeared in the early promo shot. But I adore the minty seafoam color: 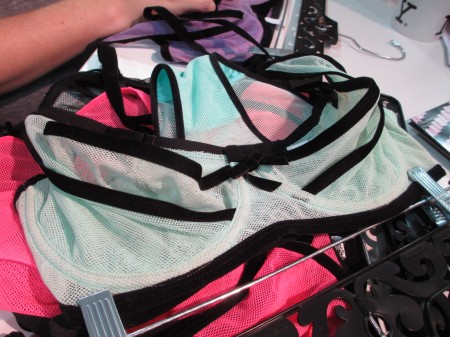 The trim is black velvet and there are two bra and two pantie styles to choose from. The closeup above shows the white micro-mesh lining the bottom half of the cup, while above the seam it’s just the soft fishnet fabric. I imagine that it’ll be quite comfortable and accommodating of many breast shapes.

Here, also, are some of the new Dessous colors (this post wouldn’t be complete without them!): 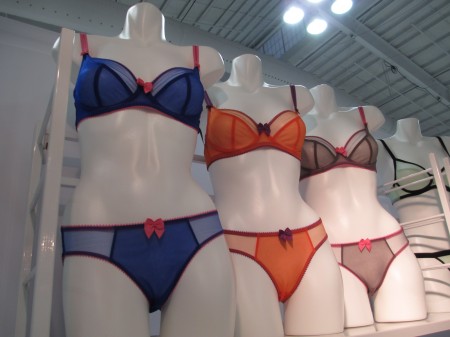 And lastly, while this isn’t anything new, I want to highlight the fact that Claudette does not offer a “nude.” The closest they come is what’s called “American Tan,” which is what people in the UK use to describe your basic panty hose. I appreciate the fact that they’re not using a loaded descriptor and, even more, I appreciate the fact that it’s actually a darker shade of brown, not the lily white we’re used to. So women of color could actually use it as a “nude.” This is the Dessous, but I believe it’s also a continuity color for the Cool Cotton collection: 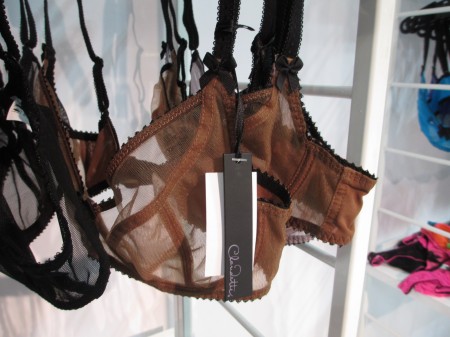