When I tell you that Leah is in the middle of a move and her landlord has insisted on re-painting their current apartment while they’re still living there, I think you’ll understand why she wasn’t able to give us an Off the Rack column today.

Here are some everyday, non-swim uses that I’ve found for bikini tops and tankinis. I made these discoveries on Tuesday as I prepared to venture into the 90+ degree heat to the oven-like subway. At first I planned to wear a navy cami over my Fauve Lucia and hope the Luciana straps were pretty enough to get away with it, but I wasn’t looking forward to sweating in that bra. Then I took pictures for my tankini post and came up with better options.

First, I tried the Madame Butterfly bikini top with my black Elomi Isis briefs, but I didn’t like the combination enough to keep the top. However, I wondered what it would look like beneath my navy cami instead? Now this is a combination that I like! The straps actually add pizzazz to my otherwise boring outfit. 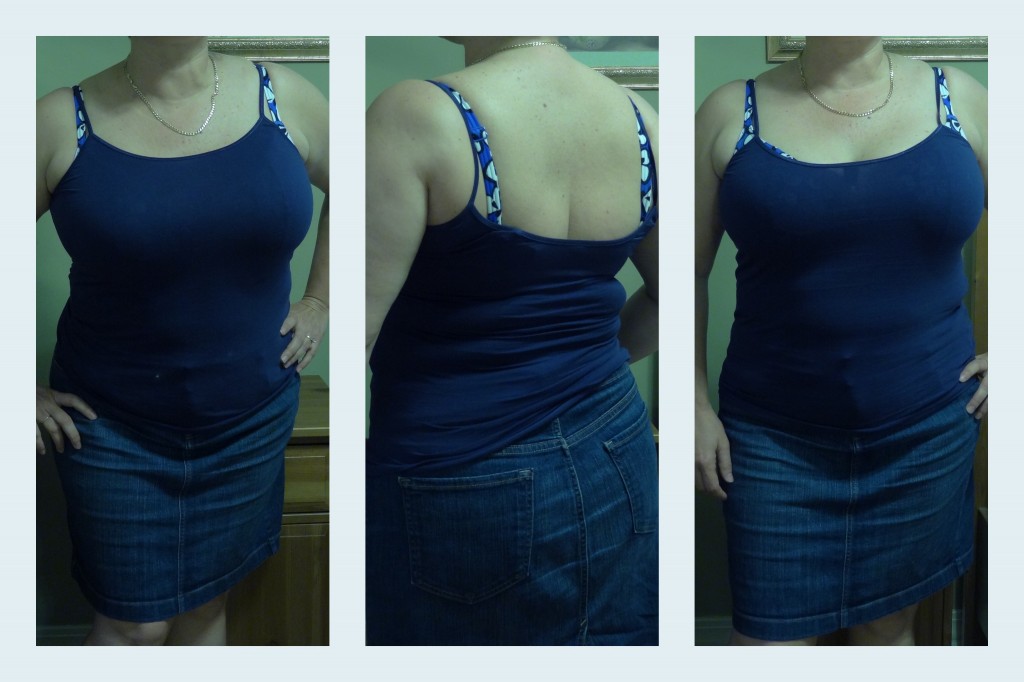 I’m including the far left and far right photos as a before-and-after reminder that less fabric = less boobs. In the far left photo, all I could see in the mirror was a Mound of Boobs. Then I realized that the back of my cami was lower than the front, so I turned it around and wore it backwards instead! (I cut the tag out after I finished taking the photos for today’s post.)

Even though I liked the combination a lot, I decided to return the Madame Butterfly top after I tried the cami over my Isis swim bra and liked that look, too. My practical self knew I wouldn’t get that much wear out of the Madame Butterfly because it would only go under two camis that I own. 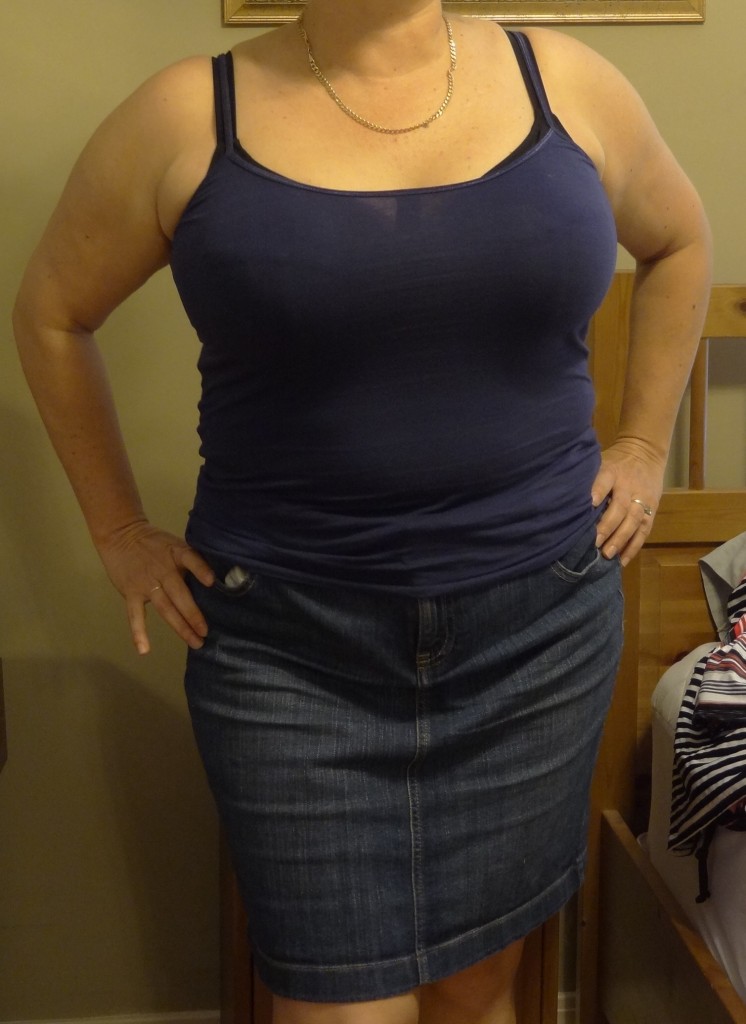 As a regular bra, the seams in the Isis were a lot less noticeable than I remembered them being in Sarasota, and I didn’t feel self conscious about my bra straps looking too bra-strappy, which is how I would have felt in my Lucia (the Lucia’s bra straps are pretty, but not pretty over the entire strap, and the edges curl). And here’s another bonus: if the back of my cami were to dip down to reveal my bra band, it would show only the bikini clasp instead of columns of hooks. I discovered this later in the day when I sat behind a woman on the bus whose tank top fell far below her wide black bra strap with its three columns of three rows of hooks.  I’ve already written about what I think of the display of the back of a boring bra band–it’s just too “underwear-y”! Even the underwear-as-outerwear and lingerie-that’s-meant-to-be-seen trends seem to require something more than the ordinary for display.

I did not mind sweating in the swim bra. It seemed to absorb the moisture and keep me reasonably dry. I find that regular bras seem to trap a layer of sweat between my skin and the bra, which tends to make me very grumpy. Also, the swim bra was comfortable for far longer than the first time that I wore it as a regular bra. It definitely hasn’t begun to stretch out yet.

Finally, I liked the Captiva tankini so much that I considered wearing it as a top that day. I credit Tina for this idea after she posted a pic of her wearing her tankini as a top in Tuesday’s Corporate Curves. I think the Panache strappy tops are great, but there are so many great-looking tankini tops out there to expand our options, especially if you choose one that’s more top-like than obviously a swimsuit. 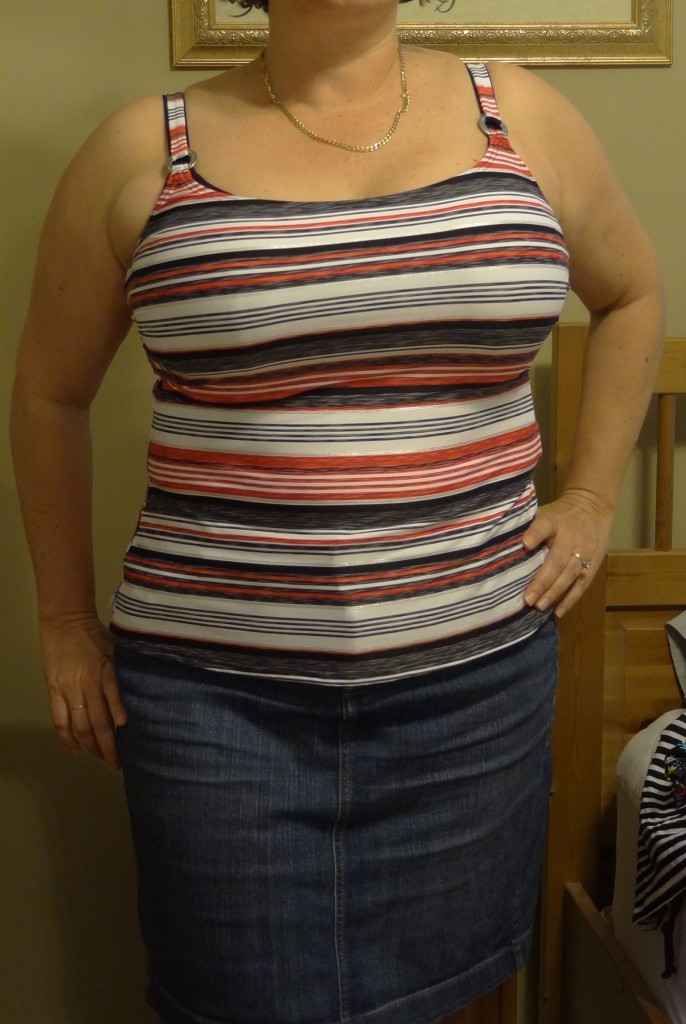 I also tried the Elomi Flora top with my denim skirt. I prefer it as a top than as a swimsuit top, but I’m not excited enough about the styling to keep it. 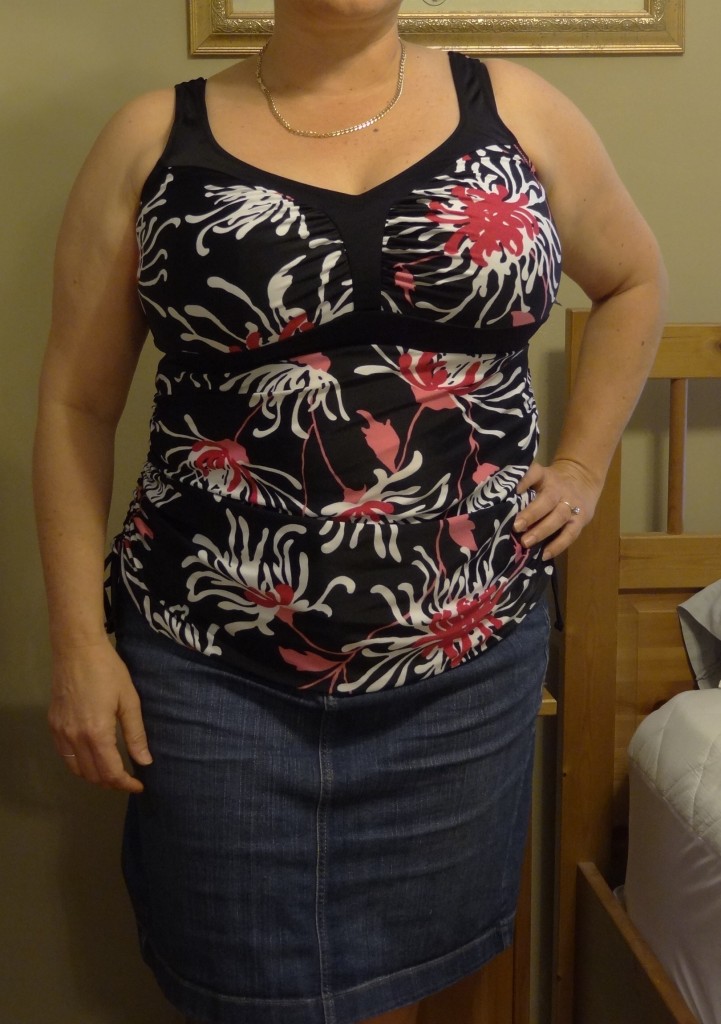 I’m curious to hear what you’ve done to accommodate your big boobs while dressing for hot weather.