I haven’t given you a reading roundup in a while, but how about a little bit of a movie roundup instead? I saw The Heat last week and have nothing boob-related to report from it (although Melissa McCarthy’s boobs do get into Sandra Bullock’s personal space at one point). Basically, it’s just an escapist movie, and we laughed out loud a lot. 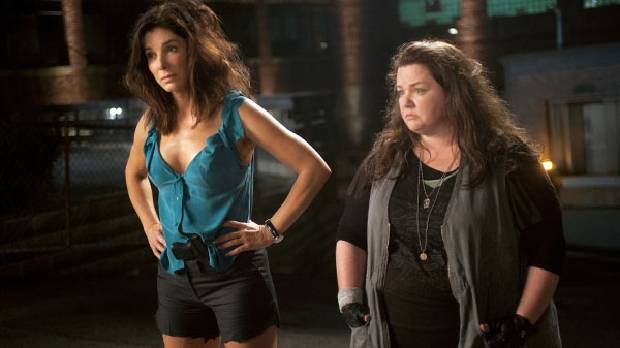 Even so, it also spoke to something I think about a lot: what I do with how people perceive me. At one point, Sandra has to play up to a drug dealer in order to bug his phone. When he takes her from the dance floor to his couch, he tells her that she’s the only woman over 40 who’s ever managed to turn him on. The Forbes reviewer writes, “The point is, Bullockâ€™s character doesnâ€™t crumble and run crying through the club so she can go home and whine to her neighborâ€™s cat that sheâ€™s over the hill as she drowns her sorrows in the clichÃ©d pint of ice cream. She shrugs it off and gets back to work. Itâ€™s just not that big of a deal, and instead of her being sad, the guy just comes across as a bozo. Itâ€™s a nice change of pace.”

Each time they encounter the drug dealer after that, he has another comment about their appearances, along the lines of

And each time, he’s the one who comes off sounding stupid and looking weak because it’s obvious that their characters’ appearance is beside the point.

Isn’t that a good reminder?

No matter how secure I’ve become since middle school, a negative comment on my appearance has the potential to take my breath away psychologically. Last fall I was on the subway discreetly trying to study another passenger because something about his appearance confused me.Â  I gave up trying to figure out what it was, took out a mirror, and began to put on some lipstick. Out of nowhere, the man said, “It doesn’t matter what you do to it. Nothing’s gonna help that face.”

I pretended to ignore him while I worked hard to regain my internal composure, and by the time I reached my destination, I had talked myself back into self-acceptance.

It’d be great if I could be impervious to comments like that, but I take my appearance a little too seriously–after all, I write a blog about it. Not only do I try to avoid people saying bad things about the way I look, I don’t even want them to think bad things about the way I look! When I consider how even models and gorgeous celebrities are picked apart daily, I realize that’s an impossible goal.

That’s why the scenes in this movie were so freeing. They remind us that when we’re faced with the reality of our imperfection, we don’t have to try even harder to become perfect (using all the tip at our disposal from the women’s magazines), and we don’t have to curl up in a hole. We can shrug it off and move on to something more important, like catching the bad guys.