One day you think your bra will never die, and the next day it’s sliding around on the tightest hook. By the time we landed in Florida last month, my beige Fantasie 4520 had literally let me down. It wasn’t very imaginative of me, but I planned to stock up on $50 black and beige replacements the next day at Sea Cup and Up. Unfortunately, Sea Cup and Up didn’t carry my standby style. Fortunately, this gave me a chance to try other everyday bras.

I ended up purchasing the Elomi Rita. Before she handed it to me in the dressing room, Cheryl, the owner of Sea Cup and Up, warned me that it was an ugly bra. It’s funny, though, because when I have a choice of pretty, non-beige bras, I don’t mind choosing an ugly beige one. 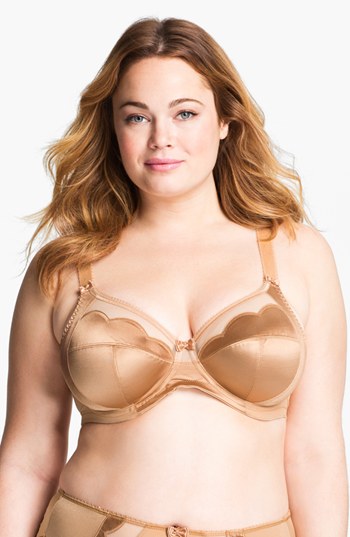 I chose this beige bra for the following reasons: 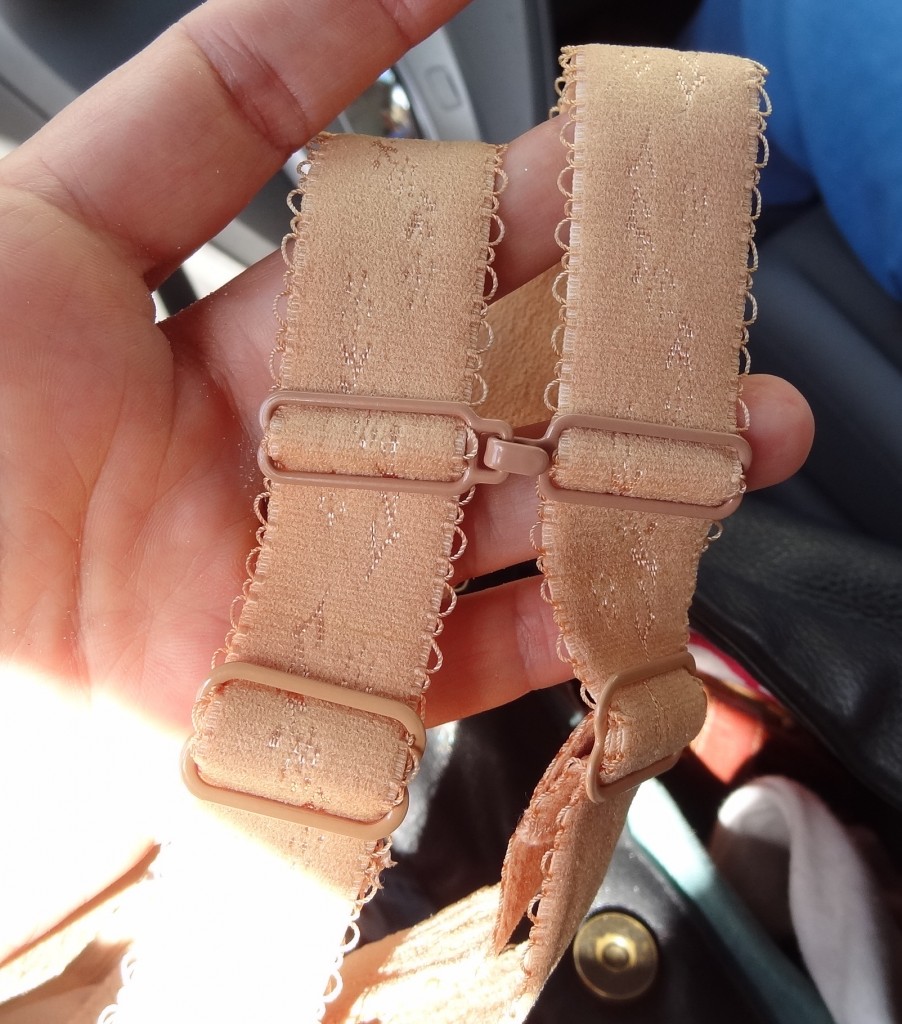 There was only one other flaw with this 34GG bra besides its boring look. It had too much room at the bottom of the cup, and the underwire extended far past my breast tissue on the side. I kept the bra with its tags on for a week while I tried to overlook these issues, and I took these before-and-after photos with my worn out Fantasie 4520 to convince myself to tear the tags off and just wear it already! The left photos are the Fantasie 4520, and the right photos are the Elomi Rita. 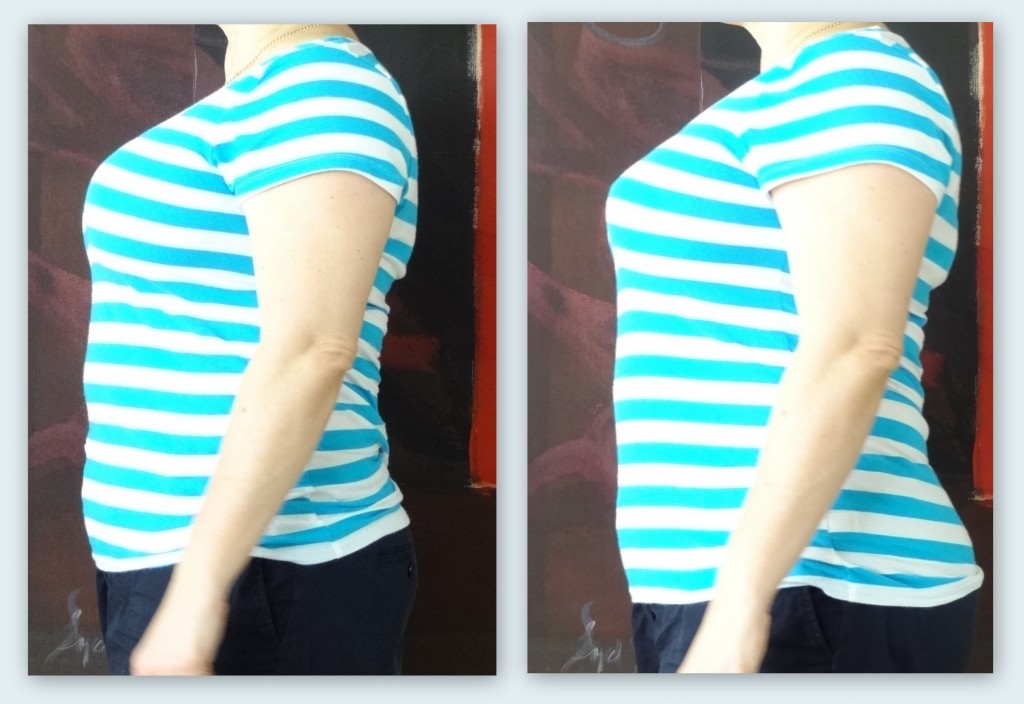 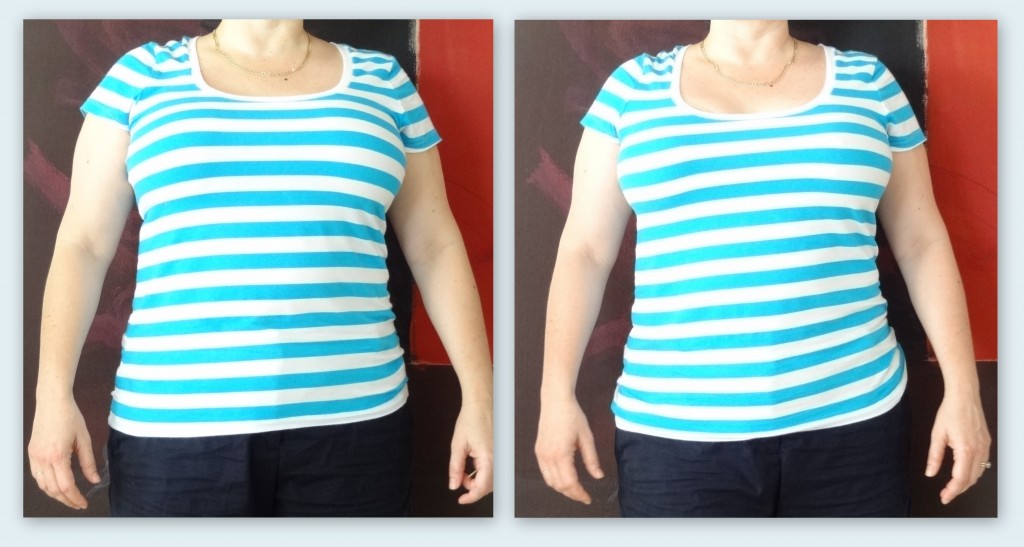 It’s a nice difference, but it wasn’t enough of a difference to get me to accept the extra cup space that I knew would drive me crazy over time. So I exchanged it for the Elomi Isis Swim Bra (in 36GG) and Briefs. 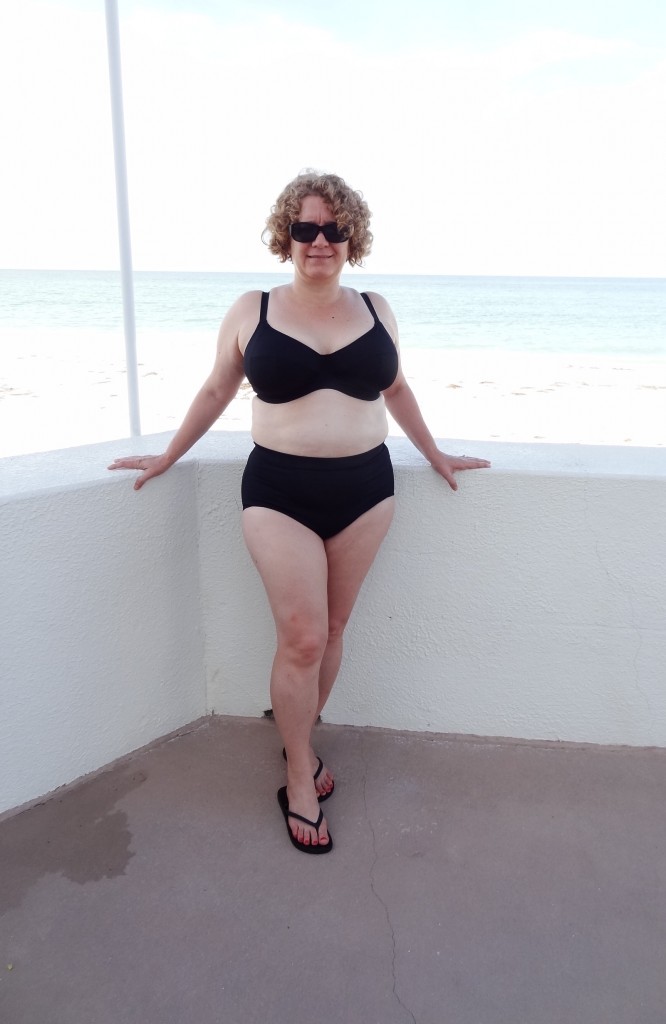 Readers, I failed to follow my own advice to avoid black unless it “looks amazing on you or you absolutely can’t find anything else in your size”. I really wanted the navy set so that I could wear the bottoms with the Panache Nancy in 36H (below), but Sea Cup only carried them in black and purple. 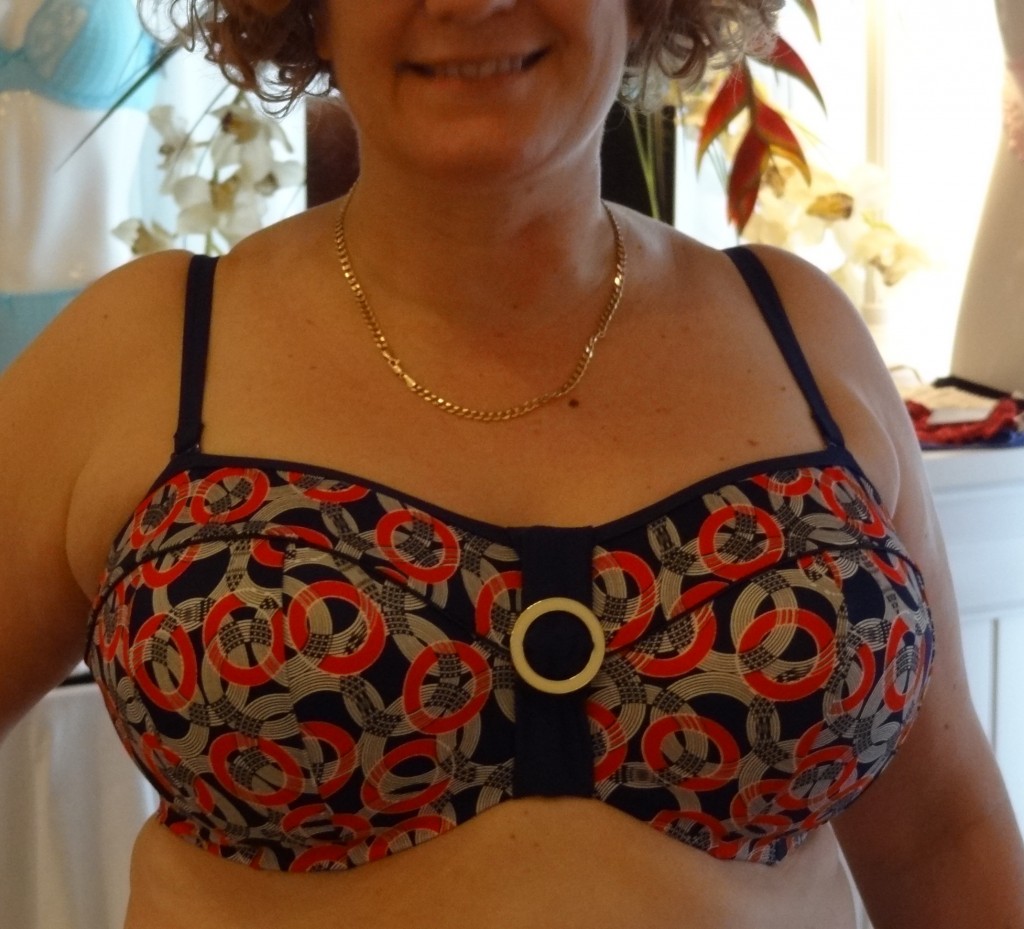 I seriously considered the purple because I loved the idea of this Elomi Madeira Ruched Tankini top. Look how my boobs fit exactly into the spaces they’re supposed to without any boob bifurcation!!! But something about the overall look said “matronly” to me, so I passed on the purple. 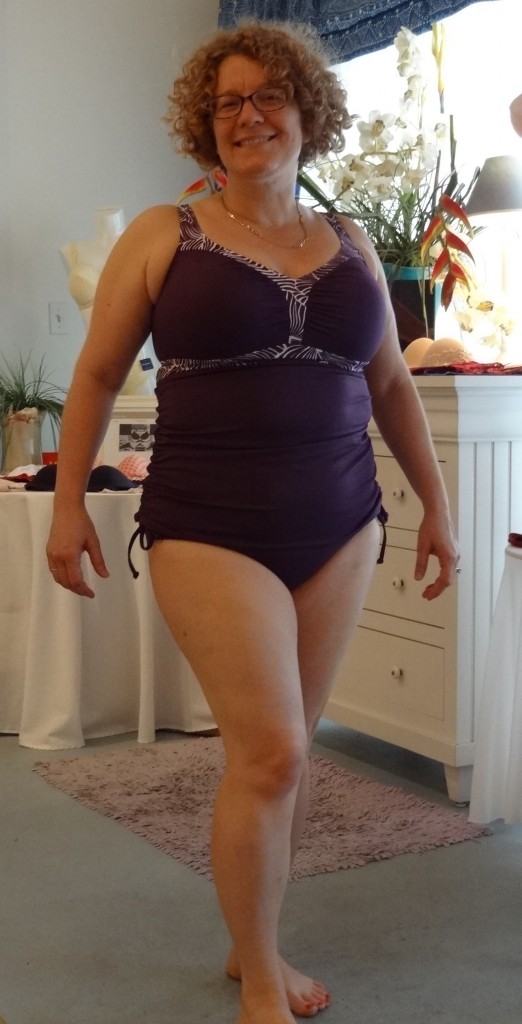 Because the Elomi swim separates are so expensive, I agonized over whether to order the navy online (and on sale!), give in and get the purple, or settle on the black. After studying all the other bikinis and tankinis on the beach, I realized that there were a ton of colorful options that would match the black bottoms, including the ruched version of this Elomi Flora Flared Tankini top that I tried on at the store. Ignore the shorts if you can–I would love this as a dress if it were longer! The center drawstring lets you create a higher or deeper neckline. 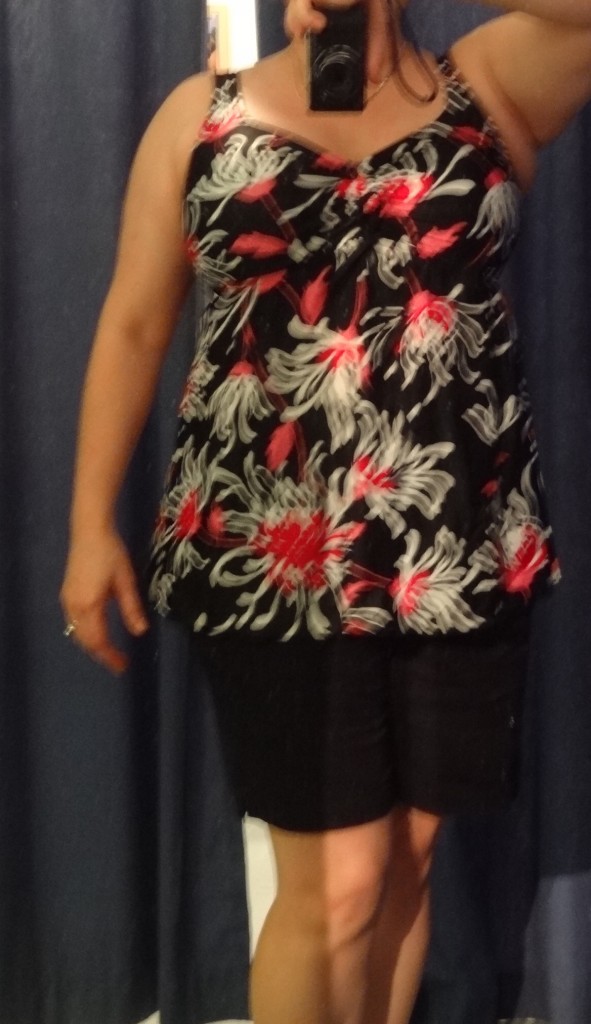 I’ve since ordered the Elomi Flora Ruched Tankini top and several other non-Elomi tankini options from Bare Necessities, as well as the Freya Madame Butterfly bikini top from Town Shop that I told you about before. I’ll be trying them on with the Isis briefs and taking pictures soon.

For now, let me tell you what I think of the Elomi Isis Swim Bra and Briefs. I love them. When I first walked to the beach in them, I wondered if I would feel exposed, but I didn’t. I felt perfectly at ease walking in front of sunbathers, but the main thing is, I felt comfortable simply walking . . . and swimming . . . and making sand castles . . . and bending over to pick up seashells without spilling out.

The 36 band is snug on me (bikinis are one area where I don’t want to go too snug, even if I can fasten it, because I don’t want to make my extra cushioning any more obvious), the center gore tacks perfectly, there’s excellent lift and support, and there’s no hint of quadraboob. It being Elomi, of course there’s the issue of extra space in the bottom of the cup, which makes me wonder if I could have done just as well with the Panache Isobel that I wrote about earlier for $30 less from Figleaves. 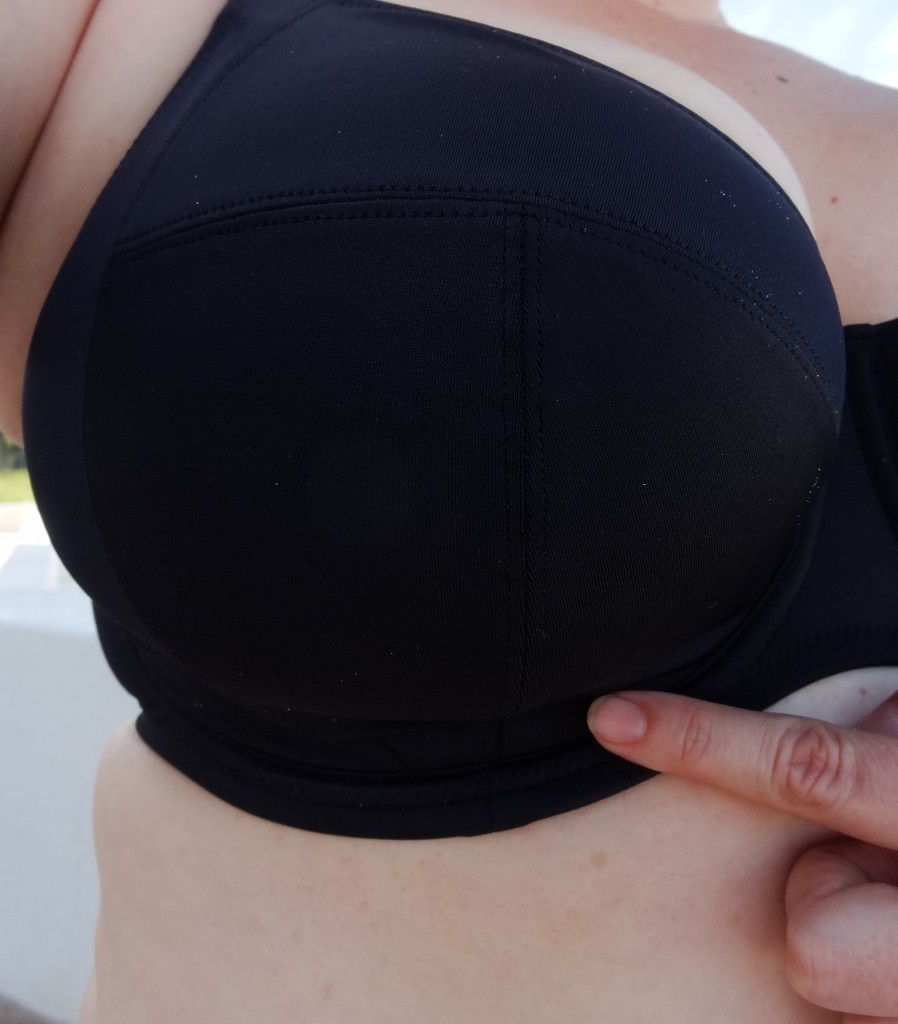 Both have three-part cups, inner mesh for added support, and a simple clasp in back, although the Elomi has a leotard back, which has its advantages, although I’m not sure $30 worth of advantages.

As for the briefs, they balance my top, and they contain everything that I want contained. There is one construction feature that irks me considerably, however: the end of the elastic band is not sewn completely to the left side seam as it is on the right. This causes the elastic to roll a bit, but more than that, it concerns me that the bottoms will not last very long. I actually exchanged my first set of briefs for a new pair, and before leaving the store carefully felt the elastic to make sure it was connected. All seemed fine. Then I put them on and felt the same issue–an almost loose end of elastic on the left side. Did Sea Cup and Up receive a faulty lot, or are all Isis briefs constructed this way? I couldn’t be bothered to return them so close to our departure, but I am not impressed. It would be great if Elomi would respond with an explanation.

Finally, I bet you’ve wondered the same thing I did: can the Isis Swim Bra be used as an everyday bra??? Answer: Yes, with qualifications.

I wore it under this top and black camisole for an entire day. 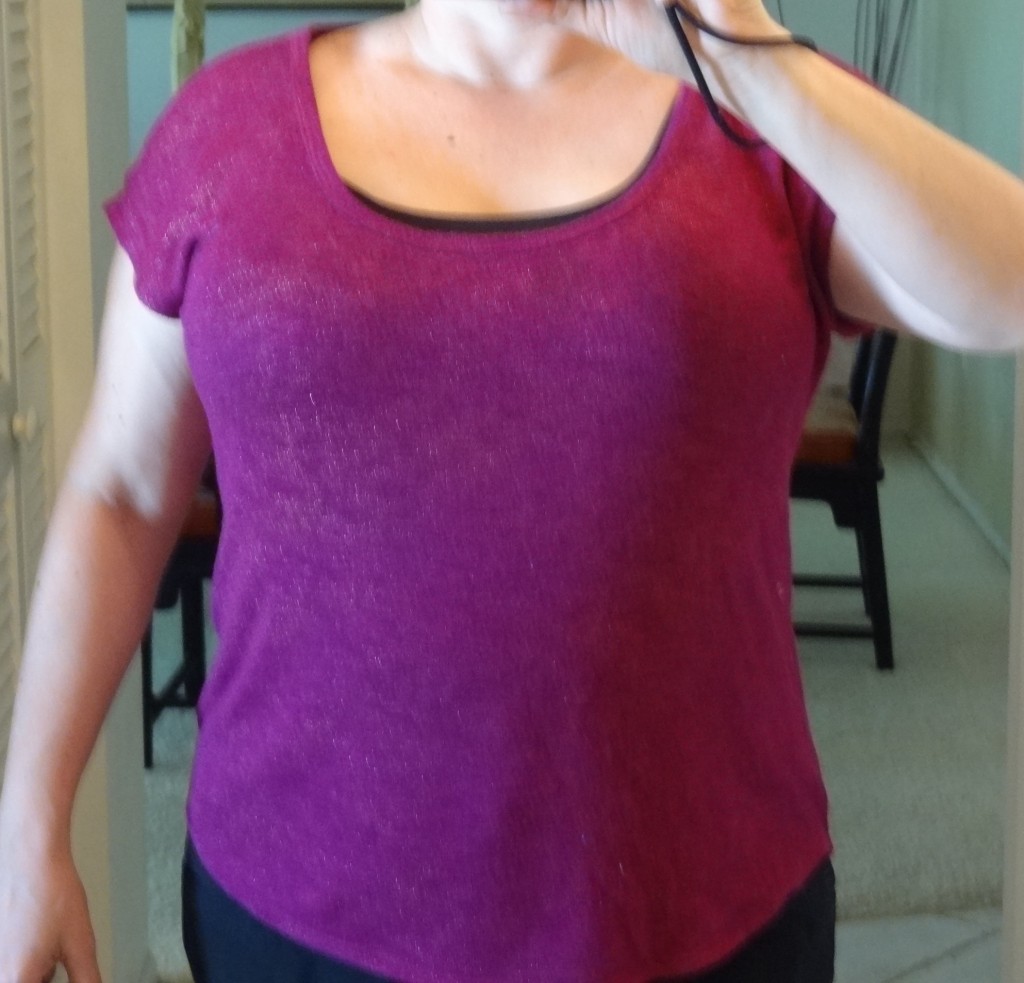 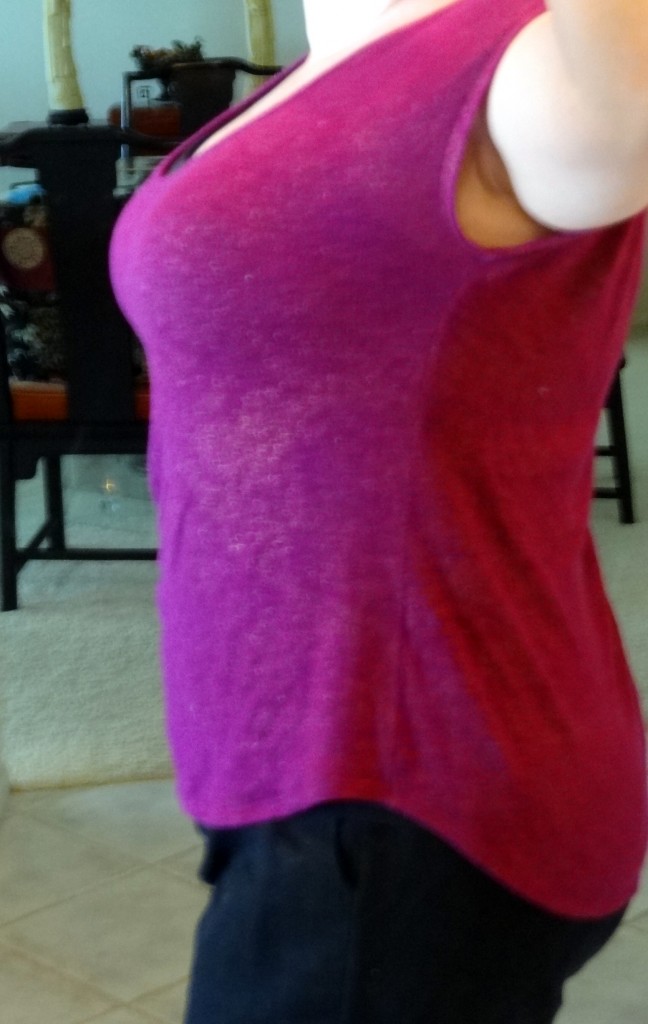 As you can see, it performed beautifully, although minus the layers, the cup seams are highly visible. I discovered this when I tried on a thin tee shirt while shopping.

As for comfort, it was a dream until about 6:00 p.m. That’s when began to feel oppressed by the layers and couldn’t wait to take it off. (I was in air conditioning, so it had nothing to do with Florida’s heat.) I felt lifted and supported until the very end, but I realized it wouldn’t be a good idea to treat this as an everyday bra every day because there are no hooks in back to make it tighter when the band inevitably stretches after frequent use.

But for pulling a dress over it and running to the grocery store directly from the beach? I couldn’t ask for anything better. Whenever I’ve run to the store in my saggy Panache Geneva tankini, I’ve felt gross. When I went grocery shopping in my Elomi Isis, I blended in with the rest of the shoppers, whether they came from the beach or the office.

How many of you wear or have worn Elomi? It was fun to discover that SweetNothings is also exploring Elomi bras, and you can get another perspective on Elomi’s swim pieces from FussyBusty—she got the blue swim bra and briefs so that she could wear the adorable flared Regatta over it.