I’ve had my eye on some dresses from Heartbreaker Fashion for a while now. But with prices even higher than Pin Up Girl Clothing and a size chart indicating slightly less boob space than my measurements require, I’ve been quite hesitant about actually making a purchase.

Heartbreaker does have a sale rack, though, where they list slightly off merchandise at a deep discount. I check it out every once in a while, but it’s hardly a part of my routine. Their newsletter last week inspired me to take another gander at the sale site, though, and much to my delight one of the items on my Heartbreaker wish list was on sale for a third off the original price.

The dress I purchased is the “Monique” dress in the “Freddie’s Bikes” print. It’s a boat neck sleeveless sheath with a moderately full skirt and a tie at the waist. 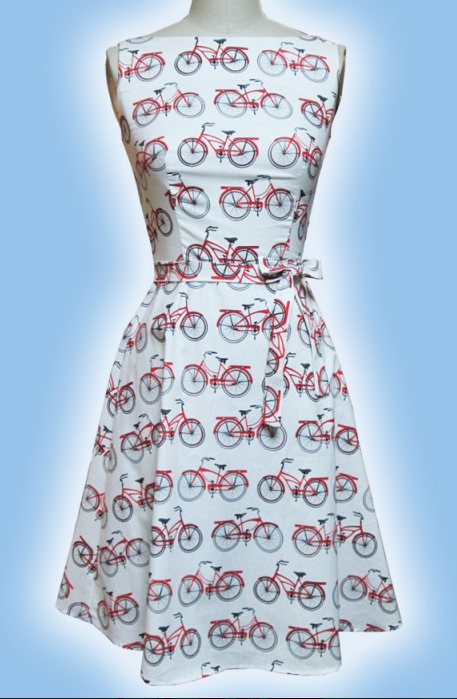 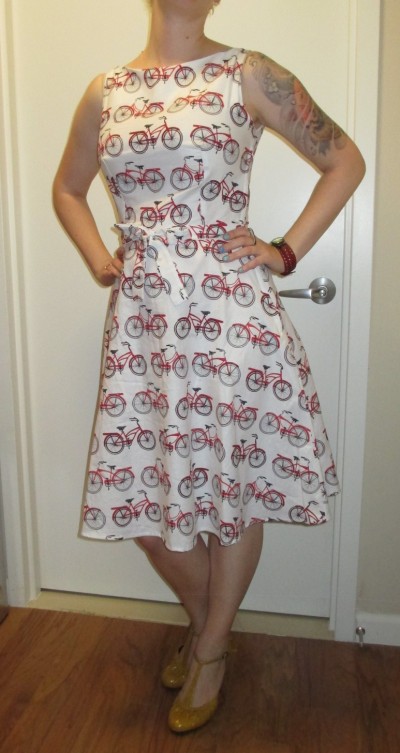 I’m also rather surprised by the fabric. It just seems a little flimsy and thin for a dress that costs $90. I’m really glad I only paid $60 because I really think $90 is asking too much. I know all of Heartbreaker’s items are made by hand in the US, which is great and I want to support that manufacturing method, but for that price I guess I expect just a little higher quality.

Additionally, I have minor complaints about the construction. As you can see in the photo below, the darts are very pointy and not smooth at the apex. Further, in both of my photos, you can see a big fold on the right side of my torso leading from the dart seam toward my belly button. Since it’s only on one side, I don’t believe it’s a result of my boobs being a little too big for the dress. So I think it’s a problem with the cut of the fabric and/or the construction. 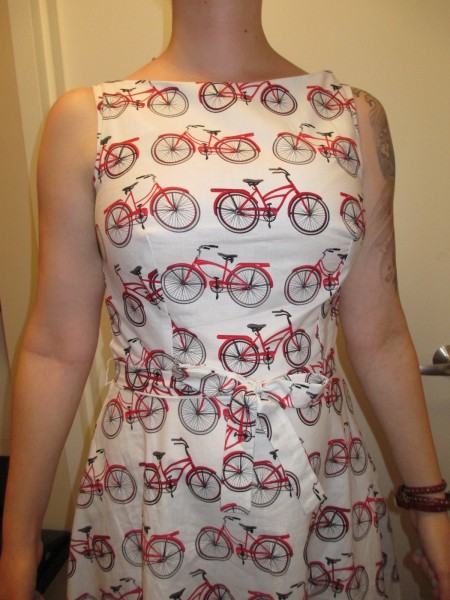 Two more minor issues: The hem at the bottom of the skirt is wavy in some spots. This happens when you’re doing a double-folded straight-stitch hem (as opposed to using a serger) and one side of the fabric gets pulled through the sewing machine uneven with the other. Lastly, there are a lot of loose threads inside the dress. I can snip them off myself, but for $90 I shouldn’t have to. 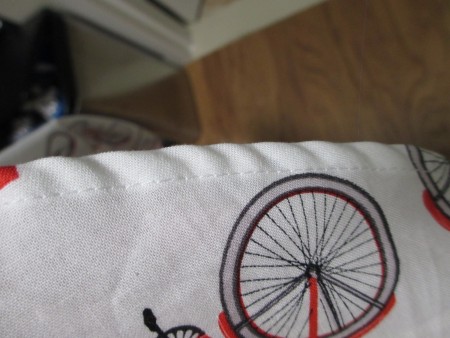 Ironically, the one “flaw” that caused the dress to be on sale in the first place is nearly invisible. I honestly don’t think I could have found it if there hadn’t been a little arrow sticker pointing to it on the dress. It’s a tiny, almost imperceptible single pulled thread only a few inches long on one side of the bodice. So kudos to Heartbreaker for noticing such a tiny problem, but maybe they ought to tighten up the sewing on the rest of the garment as well.

Now that the negative feedback is out of the way, I’ll get to the good stuff. How adorable is this print?? It’s even better in real life than online, because it’s only in person that you realize it’s not all the same bike. There are slightly different wheels, seats, handlebars, and frames. There are even two different shades of red and some of the bikes have a tiny red bell on the handlebars. Too cute!

I also adore the name of the print. It’s gotta be referencing Queen’s Freddie Mercury, right? He has a whole song about wanting to ride his bicycle and chants “Get on your bike and ride” in the song “Fat Bottomed Girls.”

I’m also oh-so-pleased with the placement of the waist seam and belt loops. With my extra long torso, too often a waist seam sits just a couple inches under my bust like some wonky empire waist. The belt loops are string and both ends are attached to the same spot instead of a top end and a bottom end attached an inch and a half apart. This allows the belt to sit as far north or south as you need to rest on your actual waist instead of being limited to the same height on every body. Usually I have to cut these string belt loops off because they’re too far north, but then there’s nothing to keep the belt from rotating or sliding up my ribcage.

The bateau neckline is also quite charming. High necks are always a gamble when you’re very busty, but this one is really working for me. Perhaps it’s because my narrow shoulders are pulling it into a just-barely cowl shape or because the tailoring and print are breaking up my expanse of breast, but I definitely recommend this shape. Lady V London offers a ton of dresses in this style, which they call a “Tea Dress” (though I haven’t tried one, so I can’t speak to quality or fit).

So final thoughts: This dress fits exactly as the size chart says and has no stretch, so I wouldn’t recommend it for measurements more than an inch outside the listed range. I also have to recommend against paying full price. Sign up for Heartbreaker’s mailing list and wait for a 15% or 20% off coupon, which they offer four or five times a year. Or stick to the sale rack.