A lot has happened since my niece wrote about large cup bra shopping in South Korea. She ended up with two job offers–one selling wholesale baked goods (you saw her interview outfit for that job), and the other as an au pair for a ten-year-old girl in Zurich, Switzerland. Despite my best efforts to persuade her to stay in New York, she leaves for Switzerland at the end of May (boo!), so her Abreast Abroad column will be truly international again. This time when she shops for bras overseas, she’ll have an even better understanding of bra fit because she attended the Eveden Fit School at Curve in February. Here’s what she learned.

At Freddy Zappe’s Eveden Fit School I observed a bizarre encounter between an anti-boring-bra vigilante and Freddy’s assistant.  This vigilante woman looked to be in her 20s or 30s, and when Freddy’s assistant suggested using a plain old lady bra on a customer, just for fitting purposes, she was outraged.  The vigilante quickly informed the group that if someone tried to fit her in such a bra she would immediately walk out and never come back. The assistant patiently tried to explain that this wasn’t a bra she would try to sell to a younger customer, but that it would help her choose more youthful bras in the correct sizes.  However, the woman insisted that even if her fitter explained that it was just for fitting purposes, she would be extremely offended just at the sight of such a bra!  Thankfully, this woman (who I believe really embarrassed herself) left in a huff a few minutes later and let those of us who were there to learn listen in peace.

The rest of the women who volunteered to be fitted had more serious issues than whether an “old lady” bra was used to help them find their size.  A woman with narrow shoulders brought up the issue of straps sliding off her shoulders.  Freddy suggested using bras with middle straps or using a hook to bring the straps together in the back to prevent slippage.  (In fact, so many women had been raising this issue that Freddy called in her boss to show her the problem and suggest that Eveden offer more bras suitable for narrow shoulders.) Another woman had been wearing her bra too tight for years.  There were deep indentations left in her shoulders and back.  Freddy said that a band or straps that are cutting off circulation can cause permanent damage and those indentations may never fill in.

Another common issue was with arranging the breasts within the bra.  Some women didn’t lean far enough forward to fit the cups properly. One woman in particular did the opposite and leaned forward with so much gusto that her breasts came up too far in the cups of her bra.

Something I realized at the fit school is that fitting is both technical and intuitive.  A few of the women who attempted fittings simply didn’t seem to grasp how to choose the best bra for their subject.  They would guess a smaller cup when she needed a larger, or loosen the straps when the straps were fine.  Other women were definitely gifted and experienced fitters and they could assess a woman’s fitting issues easily.

Closer to the end of the seminar I volunteered to be fitted.  I knew that I was going to have a chance to speak to experts at Eveden Fit School so I specifically wore a bra I had questions about.  It was the 28 H Bravissimo Rococo Charm Bra in the picture below. 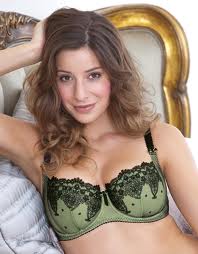 It is truly a beautiful bra and it looked fine on me.  At first, I think some of the women thought I wore it so as not be embarrassed by a ratty old bra, but I quickly pointed out that this bra had different and non-obvious issues.  First of all, the H cup was a little too big for me so there was some extra fabric.  The main issue though, was with the band.  I measure 27 or 28 underneath my breasts, so a 28 band should be perfect.  However, the underwires of this Bravissimo dug into my ribcage painfully.  I hadn’t noticed when I first tried the bra because there was little discomfort while standing, but if I sat or reclined at all it nearly felt like my ribcage was being bruised by the underwire.  Freddy suggested a more flexible underwire would be more comfortable.  She also pointed out that these wires went all the way under my arm to my back, which was unnecessary.

After Freddy saw the problems I had with this bra, it was time to try some that would hopefully be a better fit.  At the Fit School they do not take two measurements and then calculate your bra size (some of the fitters there seemed baffled by this).  Rather, they take the measurement underneath your bust and then guess based on your current bra what cup sizes to try.  This is a good method because your bust measurement can vary greatly depending on if you are wearing a bra with padding, a cloth bra, or no bra at all.

My fitter suggested I don’t even bother with a G, but try a 28 FF (I think it was a Freya bra).  The differences between this and the Bravissimo were drastic.  While they both seemed good by appearance, with the 28 FF I felt that I could relax and forget that I was wearing a bra, instead of having to hide grimaces of pain.  The lovely group of women at the Fit School immediately commented on how much happier I looked with a different bra!