With spring finally upon us, the new season of swimsuits is also here. Since I’ve owned four and a half Freya bikinis over the last seven years or so, all different styles, I thought I’d give an overview of each style and fit.

First up are the old suits: 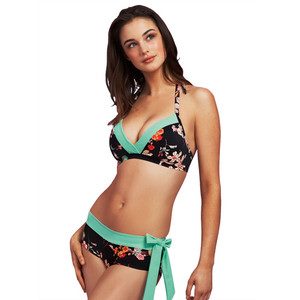 I purchased Bamboo Island from Lion’s Lair when I was first figuring out my size. Based on my measurements, they thought I would take a 28F in general, and they suggested going up a band in swimsuits because supposedly they run tight. Turns out the 30E was way too small, in part due to the fact that I was actually a 28FF. Unfortunately, these wire-free tops only go up to F-cup, so I had to go up in the band as well if I wanted to go up two cup sizes.

At the time, the 32F was fine. Since it’s a halter top (with a non-adjustable clip in the back), I didn’t need the same band support as with a regular bra, the straps couldn’t pull the band up in back, and the neck ties would be giving more support than regular bra straps.

Unfortunately, I quickly grew out of the top and it is not forgiving in the wrong cup size. There’s not enough support and I was pouring out the front. The bottoms at the time also fit fine, though for boy shorts they were definitely skimpier in the back than I’d anticipated. I grew out of those as well and ended up selling the suit earlier this year to make room for another.

Final recommendations: True to size in the band, runs small in the cups. It’s safe to go up in the band if necessary, but I don’t recommend this style for boobs any bigger than 30F or comparable sister size due to the lack of support. 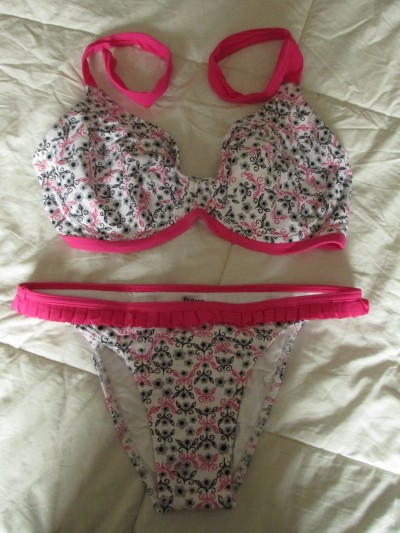 This was a partner purchase with Bamboo Island, so I also ended up with a 32F here. I’m sure it came in bigger cup sizes, so I should have gone with 30FF if anything. But once again a two sizes up band is okay for the same reasons I listed above. This time, however, the cups are much more forgiving. Even though all my experience with Freya bikinis has taught me that I need to go up a cup in their swimwear, this one still looks and feels fine even though it’s my usual cup (or its sister size, rather).

Coconut Grove has more coverage and far better support than the soft cup (duh! It’s underwired). The bottoms, on the other hand, are beyond skimpy. I literally don’t wear underwear this tiny. A good 50% of each butt cheek hangs out of the suit and it sits so low-rise that I have to make sure I’m appropriately groomed…ahem…downtown. As you’ll see with the next bikini, Freya seems to be making similar briefs slightly less tiny these days. As a size small, it’s also a little too tight on my waist nowadays. It’s not uncomfortable, but it cuts in quite a bit, really enhancing my muffin topsÂ­ and perfectly curving under the most protruding part of my tummy—not very flattering! But it’s worth it for the adorable mini-ruffle. If I ever find one in medium or large on eBay, I will snatch it up immediately.

Final recommendations: Best Freya option out there! The single seam up the center of the cup keeps it from looking “bra-like” at all, it has excellent support, and it’s very forgiving in the cups since it’s not molded or padded. 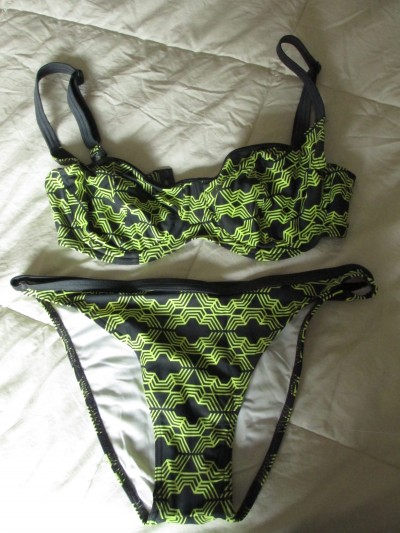 I don’t know what I was thinking when I bought this in 30F and small, when Coconut Grove required 32F and its small bottoms (which are similar to these) are so teeny. I think I was just excited to find such an amazing print at a super low sale price. It’s charcoal grey with neon yellow graphic print—too cool! Unfortunately, it’s at least one, if not two, cup sizes too small. It’s not terrible, but the shape and support are not good. It gives me a square-ish shape with some quad and sideboob. It also shows more bare chest than I’d prefer, but since the support is so lax, there’s very little oomph so I don’t feel too exposed.

Even in the right cup size, I’m not convinced this top would be all that supportive. The balcony cups don’t come up high enough and the straps are so wide that they pull from the outward corners instead of up and in. The straps are also your standard bra style, so a supportive band is much more important here than with the halters. Additionally, while Coconut Grove cups are fully lined with heavy duty mesh, Trapeze is lined with standard thin bathing suit liner only on the lower cup section, so the fabric isn’t especially strong. The weak fabric coupled with a low three-part construction makes my boobs look a little sad and saggy. I love the pattern so much that I’m going to keep wearing it proudly, though!

The bottoms, while skimpy in the butt and a little too tight around my waist, at least aren’t as small as Coconut Grove. Here’s a comparison: 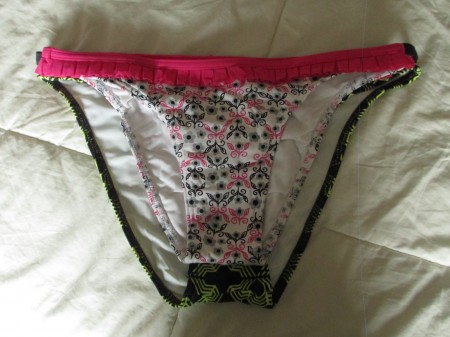 Final recommendations: Be sure to buy the right cup size! But I still don’t recommend this top even in the right size. The weakness of the fabric is a fatal flaw.

Earlier this year, I made two bikini purchases, the first of which is the Fever underwire sweetheart padded top and low-rise boy shorts.
Size purchased: 30G and Medium
Fit when purchased: Yes
Fits now: Yes (finally) 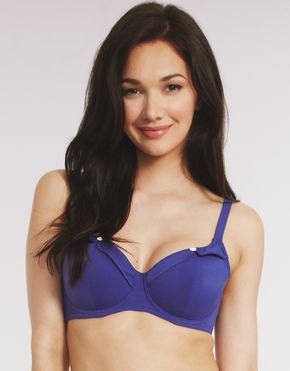 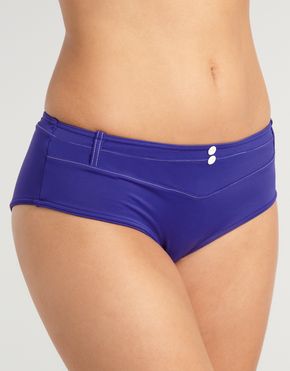 Originally I was scouring the web for an old La Senza sailor-style bikini that I found on Invest In Your Chest, but after a year of a saved eBay search turning up nothing in my size or even a sister size, I found this little number from Freya. While its nautical feel is subtler than La Senza’s almost costume-like piece, I thought it was a pretty good consolation prize.

Not having purchased a Freya bikini in a while, I’d forgotten their swimsuits run small and first ordered a 30FF. Bad choice! The top showed tons of cleavage and side-boob. I exchanged it for a 30G and am very pleased with it. The fit of the cups is spot on and there isn’t too much boob showing. Seeing as it has traditional bra-style straps, I do wish it came in a 28 band. I disagree that Freya bikinis run small in the band and it’s just as stretchy as, say, the Deco bra. Plus swimsuit material stretches out further when wet. I don’t really consider this top “padded,” it’s just lined with soft foam instead of fabric.

The size medium boy short bottoms are fantastic. My butt cheeks are finally covered up! Though it must be noted that these are not shorts on me at all. They’re full-coverage briefs, if anything. But they’ve got a higher, more flattering rise than the “briefs” above and don’t ride up in the back. I do not need to worry about pulling my wet swimsuit out of my butt in these. They’re also fully lined with a double layer in the crotch.

Final recommendations: A hearty buy it! Great round shape, doesn’t look bra-like, and plenty of coverage and support. I’d suggest going up one cup size. If you must get it in a band up it’s not the end of the world, but your regular band size is the best choice.

Lastly, I’ve got that half bikini I mentioned in the beginning. Desperate for a high-waist bikini, a month ago I impulsively bought the Freya Showboat high-waist bottoms (size medium) when they were on sale on Figleaves even though they don’t carry the matching top that I like (Figleaves only offers the halter, while I prefer the more retro-looking bandeau below). 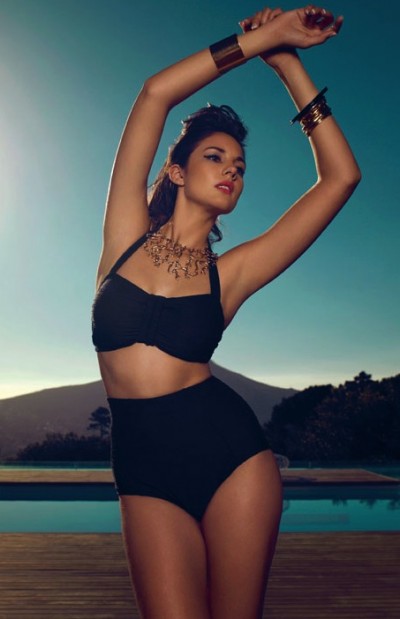 What an amazing piece of engineering! I love love love these bottoms and only hope Freya will make more in this shape. Since I have a long torso, it doesn’t come up quite as high on me as it does on the model. It still covers my bellybutton, but stops at my natural waist, not above it. As such, it makes my figure look deliciously hourglassy with a tiny little waist. And while these are not control bottoms, the black is slimming and the texture helps hide my tummy further. Oh, and my butt cheeks are fully covered again.

I’ve decided to skip buying a top for this bikini at all. I’ve got a yellow triangle top with black polka dots from The Big Bra Bar, which will go perfectly with them. And since they’re solid, they can be worn with any other solid top or any print with black in it (like Coconut Grove!).

No similar styles, but available in a poppy red color too.

5 Comments on Off the Rack ~ Freya Bikinis Overview