Shortly after the Curvexpo in February, a rep from Affinitas Intimates’ PR company got in touch with us, and offered to send me two sets from their upcoming collections. Since all my other Parfait by Affinitas bras are molded, padded ones, I really wanted to try two new styles. This gave me mixed results, but I’m still a huge fan of the line. As always, I ordered the bras one cup and one band size up (so 30G instead of my usual 28G, UK sizes), and it was perfect.

The first set I tried was the Kimberly balconnet molded bra with the matching thong, in white with black pinstripe. Here’s a photo, though note that it actually pictures the “molded, padded” version, not the balconnet (more on that below): 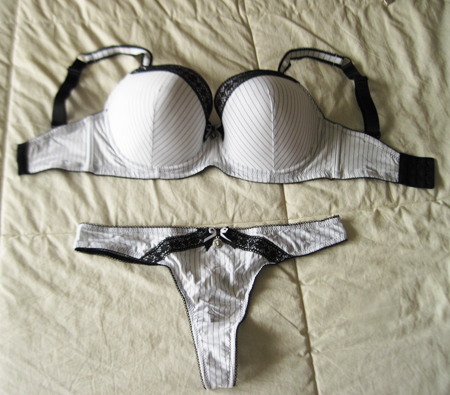 The balconnet was seriously sexy-looking. And I loved that it had the sticky silicon stuff on it and removable straps, so you can use it as a halter, racerback, or strapless. However, it just absolutely did not fit my body at all. The cups were really, really shallow at the base while still being extremely full in the center and top portion. Since my breasts are very full all over, the “point” and the top were great (no quad-boob!), but there were perhaps two inches of fold-over at the base. Additionally, the straps are quite thick and the hook attaching the straps to the bra sits above the top of the cup instead of just below it, as with the Freya Deco. As such, the rather large hook was rubbing and digging into my armpit so badly that I couldn’t wear the bra. With the ill fit and the straps, it was completely unwearable. It could be a great fit for someone with strictly full-on-top breasts and wider shoulders than me, though. And, too bad for me, the thong was too small (I ordered my usual size Medium). The seams dug into my things in a very unflattering way.

I don’t give up so easily, though. I’ve had such good luck with Parfait’s molded, padded bras in the past, and I loved the look of this bra so much, that I asked the PR rep if I could swap the balconnet for the other version. What a relief when it arrived! The straps are not removable, so there are no more hooks rubbing me raw. Plus, the straps seem to be placed a little closer to the center, which is good for my narrow shoulders. This traditional bra shape isn’t quite as sexy as the balconnet, but I still absolutely love the pinstripes. The cups have more of an east-west thing going on, though not to the extreme. I’ve worn it all day a few times now, and it’s comfortable enough that I usually forget I’m wearing it. I also swapped the Medium thong for the Large, and it’s much better. The design also has some lovely details, like the miniature Victorian-style cameo and the double-bow in the center of the bra and panties. So sweet! 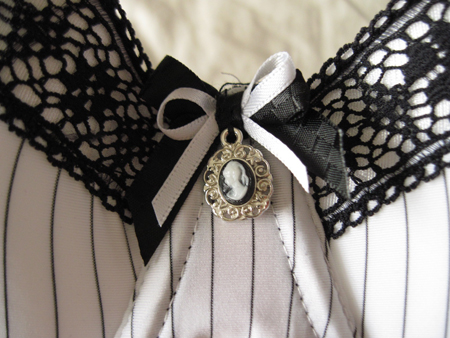 Next up are the Anna “wire bra” and hipster panties. I picked this one because I was craving a pink bra, and it did not disappoint! The photos on the Affinitas website make it look a little dull, but my photos below are a much better representation of how incredibly bright it is. I kind of wish I’d asked for the padded one again, simply because they work so well on me—but what would be the point in reviewing the same style over and over? Here’s the whole set: 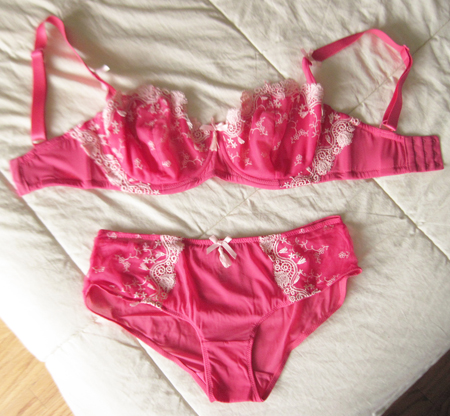 This bra suited me much better than the Kimberly balconnet, even though Anna is basically a balconnet shape too. It’s made entirely of very soft mesh. I just love the feel of this fabric. It’s not the least bit scratchy or itchy; it’s really smooth and lovely. The panties are made of the same mesh, but with one layer instead of two, so they’re quite sheer. This particular pair is a little high-waisted, giving a nice retro look. The Medium in this case fit perfectly. I think the Kimberly thong was too small because it uses a thicker, tougher fabric, so the elasticized waist was much tighter and less forgiving even though the measurements may be the same.

The bra has much more space in the base of the cups, so I don’t get any foldover above the wire. The place where the strap meets the cups is an ingenious design. The actual strap stops a couple inches above the cup, and is then attached to a triangular piece of mesh that swoops down into the cup to create a sling around and under the outside of the breast. Not only does this completely remove any chance of uncomfortable strap-to-armpit chafing, but the sling also gives excellent support. 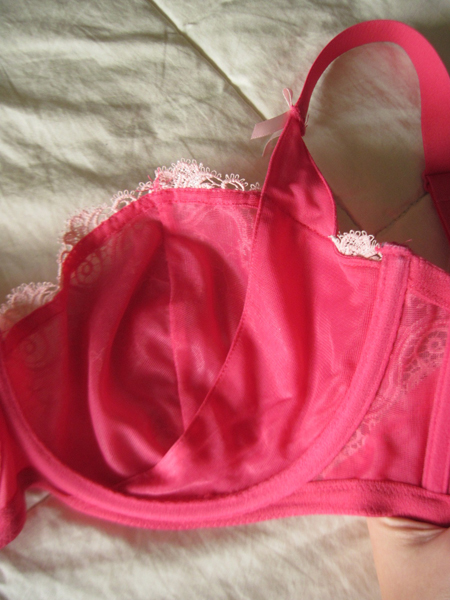 The one thing I think this bra is missing is lift. It does give good support (no bouncing), and is comfortable, but it gives me more of a dropped shape, not the up-and-out look that I typically go for. However, it’ll be a good choice for when I want a more modest appearance under low-cut tops and dresses but can’t wear a camisole. The cups are low enough without being plunging that so far it hasn’t peeked out of any shirts—though with that cute pink embroidery, maybe I should find a shirt from which it does peek out just a little. I must note that the embroidery at the top of the cups dips into my breast tissue to give just the slightest look of quad-boob, so I would recommend this bra more for breasts that are not so full on top. 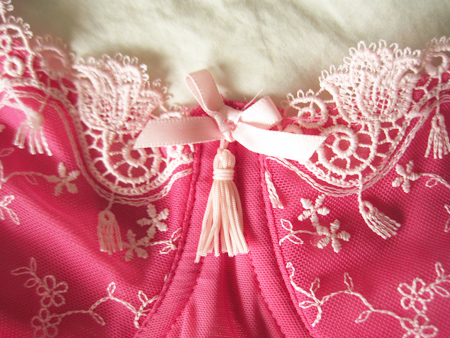 Speaking of the embroidery, again I really appreciate the little details. Both the bra and panties have a little bow and tassel hanging from the center. In the embroidery, there are also even smaller tassel shapes—so precious. And one last detail that all Parfait bras have, which I love, is that the strap continues completely down to the base of the band, so you can tuck the label tag into it. I hate when those tags get all folded over! 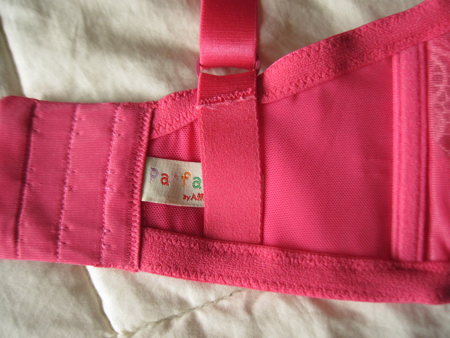