I had a conversation with Darlene recently in which I mentioned that I really appreciated her perspective on dressing the hourglass figure as a whole, and focusing on the big picture?—including shape, structure, shoes, accessories, etc?.—rather than just bras and boobs alone. I personally think her tips are so universal, and they especially stick with me as I reach the end of my 20s.

I’m at an age (27 [and a half]) where I’m getting a little too old for my old shopping favorites of Forever21, H&M, and the juniors section of Marshall’s and TJ Maxx—but I’m also still young enough that I mostly avoid “conservative” styles.

This all got me thinking about how my style has been “maturing” in the last couple years while still contending with a small waist coupled with big boobs and fairly sizeable hips (which I also love). It hasn’t really been intentional; I’ve just noticed a gradual feeling of discomfort in babydoll dresses and miles of neon fabric, and growing comfort in more structure and raised waist- and necklines. The most obvious place this change has appeared is among my mighty collection of dresses. I’m going to share four sets of frocks that I think best illustrate this.

First are two purple dresses that perfectly illuminate the direction my wardrobe is taking. The one on the left has an empire waist and flowy skirt with a star pattern. I bought it at H&M when I was maybe 20 and was in the midst of an obsession with cheap, bright, and stretchy summer dresses. The one on the right is a darker shade with longer sleeves, longer skirt, and a defined waist, purchased perhaps two years ago. Instead of a juvenile printed pattern, it’s got embroidery and brass studs (note: Click the photos to see the images larger). 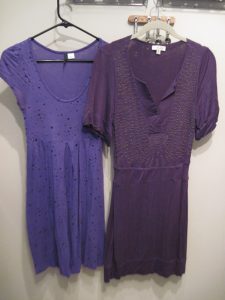 Here’s a close-up of the two fabrics: 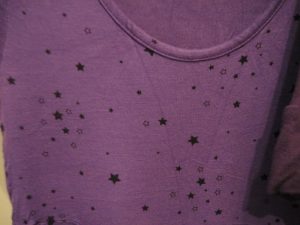 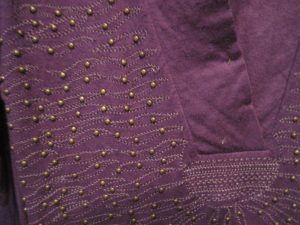 Both of these dresses show about the same amount of cleavage, but I think the patterns and placement of the horizontal seam makes them look like two entirely different age levels. Additionally, the studded one has much better balance with my boobs, thanks to the longer sleeve (cap sleeves are rarely a big-busted girl’s friend) and a slight bubble hem. 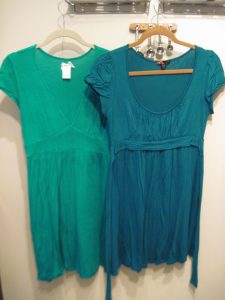 Both of these show a ton of cleavage and are so short that they just barely graze my fingertips if I stand up straight. In fact, I prefer not to sit down on the subway when wearing them because I can feel the seat almost touching my butt. Unsanitary and nearly giving the riders across from me a show. With empire waists on each, they’re the epitome of a babydoll dress…and no 30-year-old should be wearing anything with the word “baby” in its title, if you ask me. It’s for these reasons that I’ve been attempting to replace them with similar, but slightly more grown-up versions. I used to own the one on the right in navy blue, black, and royal blue as well. Here are my navy and black replacements: 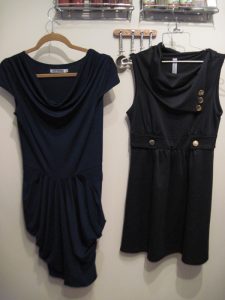 I think the navy one is much more flattering. The cowl neck is great for a large bust and the tulip skirt flatters my hips. And it’s a bit hard to see in this photo, but there is a wide waistband that starts on either side of the tulip skirt gathers and wraps around the back. It gives a defined waist where those empire babydolls swallow it up. The black one is still pretty short, really not much longer than the original, but it’s made of stiffer, heavier fabric and it has a waist and details that draw the eye away from my bum.

Lastly, here are two more green dresses that I think perfectly exemplify the age I feel and the age I want my look to convey. The left is a Jessica Simpson frock and the right is Calvin Klein (on clearance for only $40 at Burlington Coat Factory right now! In other colors too.): 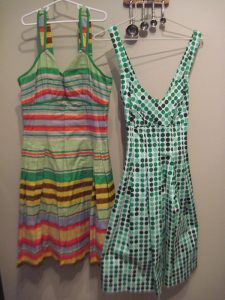 Both of these are still very bright, fun and flirty, and show plenty of boob (come on, do you really expect mainstream brands to ever make dresses with truly ample cups?), but there’s enough structure in the gathering of the boob cups and the seams in the bodices that I don’t feel uncomfortable. The Calvin Klein, especially, is very nicely constructed. It makes me look super thin and the full skirt is wonderfully feminine and almost retro ’50s. Here’s a closeup up of the bustline with vertical bodice seams that open into pressed pleats in the skirt: 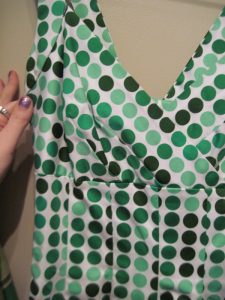 The Jessica Simpson, too, does a fabulous job integrating almost invisible structure. Here is a closeup of the princess-like seams running down the front of the bodice (ignore the line down the middle?—it’s just a wrinkle). Note that the pattern matches up perfectly across the vertical seams, something Darlene has discussed before. Another great thing is that the straps are adjustable. There is a pair of buttons on the back of the dress, and three button holes on each strap?—perfect for my mini shoulders! 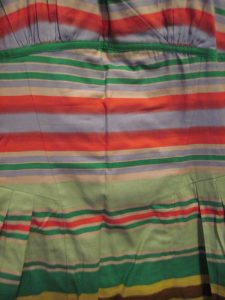 So what have my realizations been upon investigating my own closet? As I age:

It’s really not that many differences, but it makes all the difference in how I feel in my clothes.

How has your style changed as you’ve gotten used to dressing your breasts, and as you’ve grown?