I think you’ll enjoy these posts and articles that have caught my attention lately.Â  (The first three titles are links to the blog posts.)

1.Â  Me and My Mythical Bra Size

With a narrow range of only 20 bra sizes available in most mainstream lingerie outlets, Boosaurus is on a mission:

If I show everyone that a girl with a 28-band isn’t just some mythical, twig-like creature, maybe some girls will realize that bands below 32 do exist, and they’re not freakish for feeling like bands are always too big for them. If I tell everyone over and over that I wear a GG (or sometimes G, or H, or HH) cup, then maybe a few people will realize that the alphabet doesn’t stop at D, that there are lots of options out there, that well-fitting bras do exist, that wearing a D cup or above isn’t some strange, shameful thing.

I had to smile because her post reminded me of my search for an H cup fit model on craigslist back in 2009.Â  The title of my post about the experience? Searching for an H Cup Model (in a World that Doesn’t Believe in Their Existence). You’ll smile–and cringe–if you read it.

Les Gros Bonnets’ post has me thinking. Although I realize that one doesn’t automatically give you the other, I have always assumed you can have both support and uplift in a bra. What has been your experience here? I’m going to start looking into this more, especially as I try the Curvy Kate bras that are on their way to me. That’s one of the reasons I’m so interested in this topic. I have now tried the Curvy Kate Princess in a 34H (the 34FF was far too small), but it basically just contains me. There’s no lift. So I’m going to see if the size can be tweaked before I wear it extensively to check the support. That meant ordering over $450 of Curvy Kate bras from BareNecessities last night to get to the bottom of this. I’ll let you know what I find out.

3.Â  What Curvy Clothes Would You Like to See?

June over at Braless in Brasil posted this fun question. Of course I blanked out on ideas immediately after reading it, but I agree with some of the comments:Â  a classic Burberry trench coat and a fitted suit jacket would be lovely. And I especially like the first and third dresses in June’s post.

Since I know I’ll be coming up with answers to this question for a long time, I’ve started a new Pinterest board called Clothing Wish List for D Cups and Up. If you’re already on Pinterest, give me a link to you in the comments so that I can follow you. Then I can make you a contributor to this board. Or you can create your own board that others of us can follow and re-pin from.

4.Â  The April 2012 issue of ShopSmart from ConsumerReports

This caught my eye in the grocery checkout aisle because it contains an 8-page feature on bra fit. Unfortunately, they give the same old Plus 4 misinformation, but some of their makeovers turned out really well. Here are my favorites: 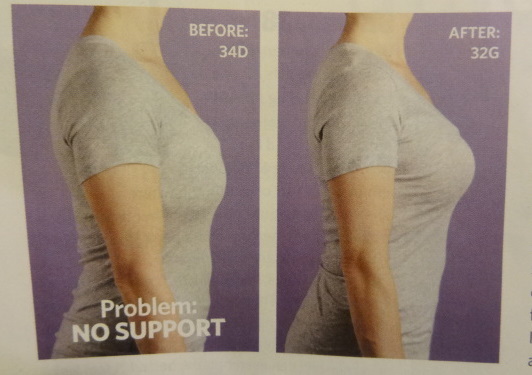 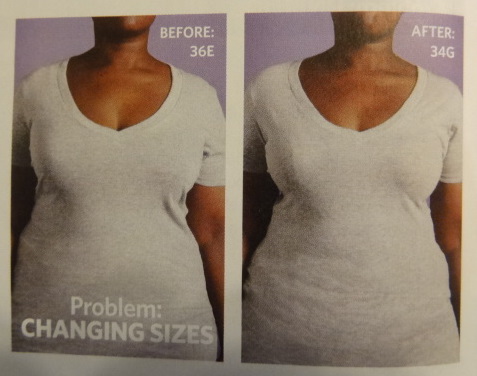 They even have this piece online comparing 34B bras from La Perla, Victoria’s Secret and Target.Â  I would expect the answer to their question “[D]oes a woman need to pay that much [over a $100] for a well-made bra that fits?” to be very different if they had used F cups and up.

Finally, they even had a review of the Genie bra! Five staffers tried it in size medium and five in size large. As you would expect, all of the women said it was comfortable, but “eight out of 10 said it wasn’t particularly supportive.” (I’m surprised only eight reached that conclusion!) The bra expert they consulted said it made them look “smushed, unsupported, and bouncy” and that, “You might wear it around the house instead of going braless, but that’s about it.”

CurvyWordy is on the hunt for a house/sleep bra. I wonder if she’d like to give this one a try! (She has links to the other bras she’s reviewed at the bottom of the Royce review that I’ve linked to.)

Found this at a friend’s house over the weekend. Since I’m constantly evaluating other women’s chests with Mr. Campbell, this was slightly reassuring. 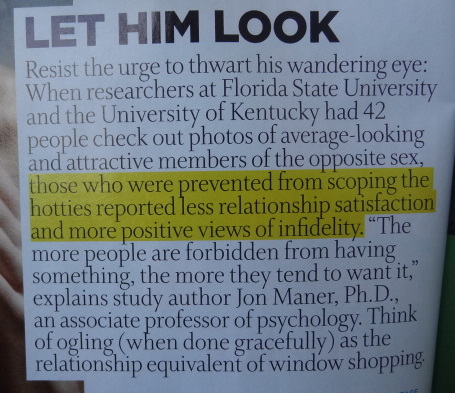