The picture below is of a woman who was thrown out of a casino in 2007 because her dress was considered too revealing.  It’s far more revealing than Rita Wilson’s Golden Globes dress that I commented on last week, but there are two places that I would think any amount of cleavage is acceptable:  the red carpet and a casino.  Whether it looks good or not is another story.

If I had seen this woman leaning over the roulette table, I would have made a snide remark to Mr. Campbell because I’m mean like that.  But suggest that she be kicked out?  Never. 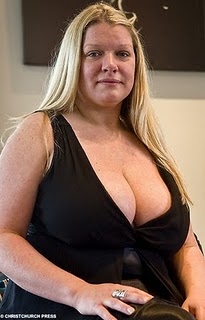 Helen Simpson’s and her boyfriend’s comments in this article are enough to make me regret my hypothetical snide comment.  “The most humiliating thing was that everybody knew,” said Helen.  “All the staff were staring and the group of guys that complained–I’m sure it was them–were smiling.”  [My note: Guys complained?  Incredible!]

In her complaint to the casino’s management, she wrote, “Being well-endowed in the upper region is something I did not choose in life and something I’m certainly not proud of.  Have you ever been shopping for a formal cocktail dress that is accommodating to a size 14 woman with the top half demanding a size 20?”

Said her boyfriend, “She’d changed quite a few times before we went out and I thought she looked really nice,” he said. “It’s just disappointing.”