Did you fly anywhere this past holiday weekend, and if so, how was security?  It’s an old story now, but I wonder if anyone else has had an experience similar to Eliana Sutherland’s at the Orlando International Airport. 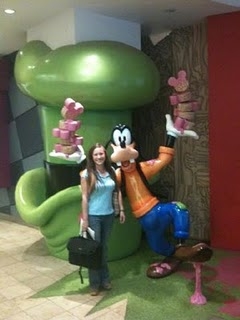 I was selected for the scanner at DFW on our way home from Vietnam last June.  Before then, the scanner was something that only Anonymous Other People had to deal with it.  When it became my turn to show every inch of my body to a stranger, however, I wasn’t fine with it.  (I wish I could say I was concerned about the radiation, but I didn’t even know that was an issue.)  I told them I wouldn’t do it, and they told me I’d have to have a pat down.
For me, a pat down while fully clothed, conducted by a woman I can see and talk to, is simply less intrusive.  The only irritant was the time it took for them to locate a pat downer.

Like Eliana Sutherland, I had to wonder why I was selected.  Unlike Eliana, I doubted it was for my breast size.  I was wearing a loose-fitting dress and a much less lifting and supporting bra because I wanted to be comfortable on the long trip.  (From what I can tell from the picture, Eliana wins 5 stars from me for her great-fitting bra and fabulous posture!)  They say the selection is random, but the few people I watched go through the scanner had great bodies.  I was actually kind of flattered to be included.  My impression was that they chose people who were (a) comfortable with their bodies and therefore (b) unlikely to make a fuss.

I appreciate that Eliana Sutherland has made a fuss.  With the great potential for abuse in this system, it’s important for the watchers to know we’re watching them.
——————————————-
It isn’t quite the same, but the idea of making a fuss reminds me of this great subway heroine, Nicola Briggs.  She shares the motivation for her reaction here.  I remember being shocked to see a young man rubbing up against a young pretty female tourist on a subway when I first moved to NYC.  I made eye contact with the tourist and brushed the man away from her as I left the train, but I wish I had called him out on his conduct.  The tourist’s parents were oblivious to what was going on, and I think the girl was in denial.
——————————————
Finally, thanks to Linda and her new blog, Unhooked, for this topic idea!