When I fit a customer into my shirts in person, I often take along a set of bras in a range of sizes. That way, when I measure a woman with a 31″ waist and a 40″ bust who is wearing a 36DD bra like the woman below, I can show her how a better-fitting bra makes a better-fitting shirt. In this case, a 32G bra did the trick. 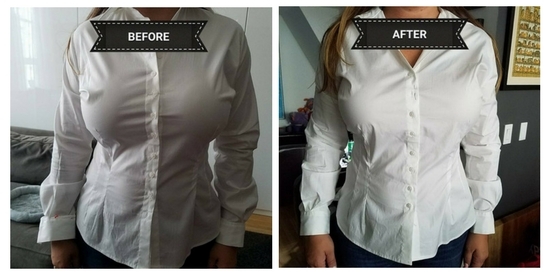 It’s another story when a woman emails her measurements and bra size to me before placing an order online. Then I have to remind myself that they came to buy a shirt, not a bra. However, when Sharon (not her real name) from Wisconsin told me she had the same measurements as the woman above and that she wore a 38D bra, I couldn’t help myself.

“I struggle with bras, but I have spent a fortune on them,” she answered.

I knew of a great lingerie store an hour away from her, but a quick check on Yelp showed complaints that the store was now cutting the size tags out of its bras! There was no way I could send her there. I also didn’t feel comfortable fitting her by email and giving her a shopping list at Bare Necessities.

Instead, I remembered My Bra Concierge (which purchases advertising space on this blog). When I met Jenn Baker and Velaire Elliot in April, they told me that they had also grown up in small towns with limited bra shopping options, so I knew my customer who lived hours away from a reputable bra fitter would have a special place in their hearts.

Regardless of their hearts, however, I couldn’t recommend My Bra Concierge without trying it first, and since my last fitting was for Ewa Michalak, I thought it wouldn’t hurt to find my current fit in the mainstream busty brands. Armed with the discount code you see in their ad, I began their TruFit Survey.

My Bra Concierge eases you into the process with simple questions about the bra you’re currently wearing, what you like about it, your clothing sizes and a few other relevant details. Confusingly, neither Ewa Michalak nor Empreinte are listed in the dropdown menu of manufacturers for the bra you’re currently wearing. I decided to guess that my 75G Ewa Michalak is equivalent to a 34G Fantasie and entered that instead.

Here’s where you see the influence of ABTF, which transformed both Jenn’s and Velaire’s lives. They use a modification of the following diagram and offer super clear instructions. The step I’d most dreaded turned out to be the easiest! 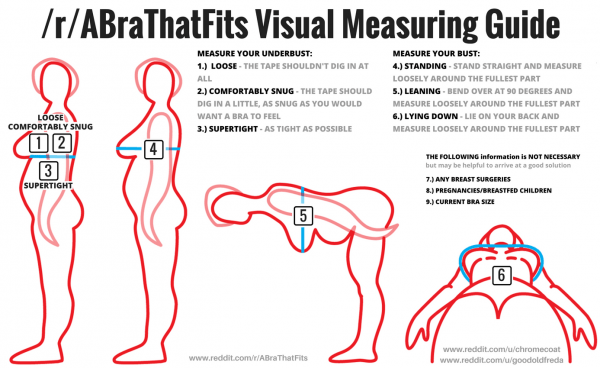 Some of the questions and supporting diagrams weren’t completely clear to me in this section, but I treated it like a multiple choice test, chose the best possible answer and hoped for the best. (Example: I’ve been told that I’m full on top, but the diagrams indicated that I could be full on bottom.)

Instead of typical choices like “balconette” or “full cup”, My Bra Concierge focuses on functional style, saying to select all that apply from a list of everyday/t-shirt, pushup, bralette, racerback, convertible, strapless, nursing, athletic and matching sets (not sure how the last one fits in with the rest). Later I was also asked (i) whether I was looking for patterns, lace, neutrals or bold colors; (ii) did I want sheer materials, light lining or padding; (iii) was I going for a base wardrobe or could they “have a little fun” with the selection; and (iv) was my budget per bra $45-$60 or $61-$85.

To wrap everything up, the survey asks whether I want 3 bras, 3 panties, or 3 bras with 2 panties, and do I want a package sent to me just this once, monthly, quarterly or semi-annually.

Finally, I entered my credit card information because even though the shipment is completely free with the code, My Bra Concierge needs to be able to charge for non-returns.

A few days after answering the TruFit Survey, this package arrived. 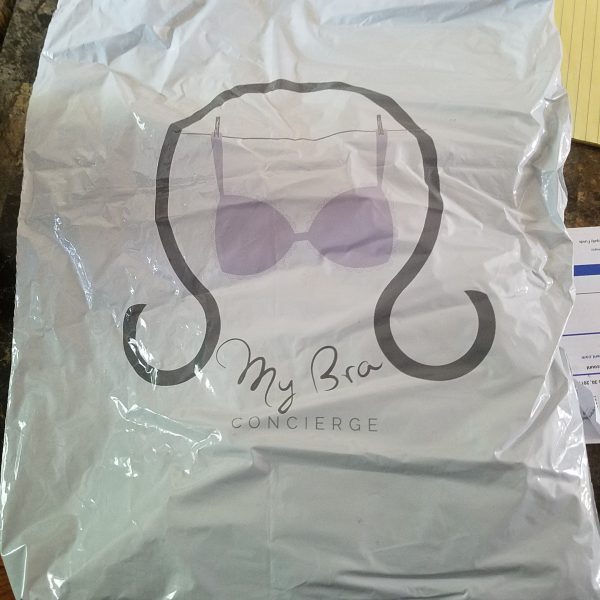 Inside were lovely touches like tissue and a personal note. 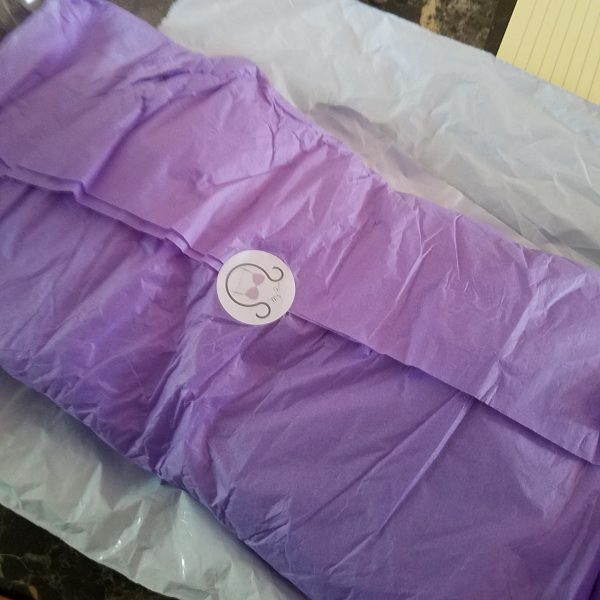 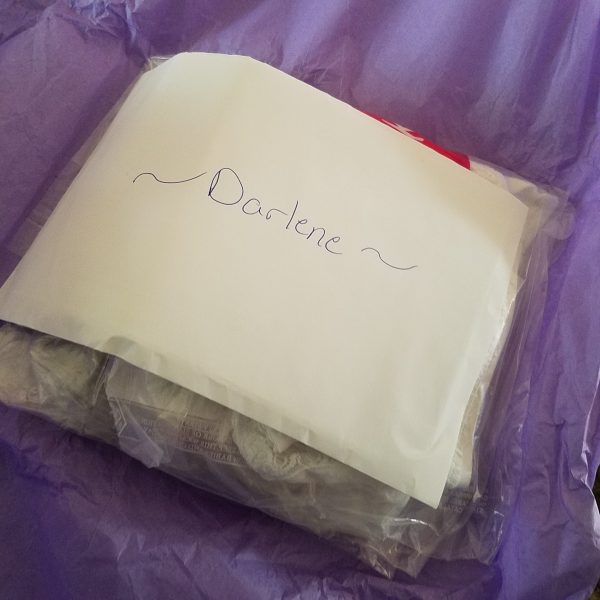 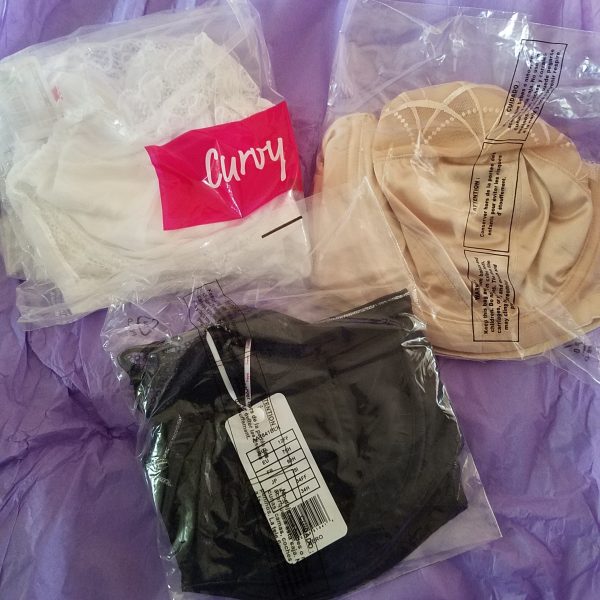 I put the bras aside and promptly forgot about them until My Bra Concierge sent me a 3 day reminder email. That’s when I tried each one on in front of the mirror.

First up the Freya Hero that I reviewed last year and that Leah reviewed in January. My Bra Concierge sent it in a 34FF. I expected great results but was disappointed by wrinkling in the cups. After I tightened the straps a LOT, the wrinkling disappeared, but there was a little extra space at the base of the cups. It fit okay, but my overall impression was Too Much Bra. I’m so glad they didn’t send me a 34G! The Hero that I own in 32FF almost fits me with slight pillowing above the cups, so if I really wanted a new Hero in my collection, I would request a 32G to try when I make my return shipment to My Bra Concierge.

Second came the Elomi Cate in 34F. What a pleasant surprise. I loved the lift and centering, and if I were in the market for another seamed beige bra, I would be tempted to keep this one. However, I feel a bit skittish about Elomi. I’ve read elsewhere about the underwires extending too far back, and I would worry that even though it seemed fine when I tried it on, it might become Too Much Bra as I settled into it. Since Elomi’s smallest band size is usually a 34 (eg., it skews larger), I was impressed that My Bra Concierge only gave me an F cup in this brand.

Last, I tried the Curvy Kate Ellace in 34FF, and this bra was Just Right. Not only did it fit perfectly, it gave excellent lift with a rounded (rather than pointed or almond) profile–so rare in a seamed bra. The underwire in this 34FF is an inch shorter than that of the 34F Elomi Cate. If this bra had been beige, it probably wouldn’t be going back in my return shipment.

After experiencing the process, I feel like there are two perfect customers for My Bra Concierge.

I wouldn’t really consider myself to be the second kind of customer because I LOVE examining all the features of a bra, exploring the colors, and reading the reviews. On the other hand, I tried and liked two bras I NEVER would have clicked on my own, and My Bra Concierge saved me from decision paralysis–usually I’ll order a million styles and sizes before settling on a single bra. It was kind of reassuring to have my options limited to three choices picked by someone else. Maybe there’s a third ideal customer–the customer who needs help breaking out of a rut!

There are two things the website could have done to increase my likelihood of keeping a bra:

My Bra Concierge only launched in June, and they welcome feedback on how to improve. You’ll notice some rough patches when you take the survey–this isn’t a glitzy campaign funded by venture capitalists. Instead, it’s a company founded by two friends with full-time jobs who have decided to move beyond a bra-fitting forum to invest in inventory and a website that will help more women experience amazing fit. Now I can send my online customers who live in a bra fitting desert to someone I trust not to automatically put them into a 36DD or 38D!