Thanks to a link on Already Pretty last May, I discovered Rachel Bloom’s big bust in this video from Crazy Ex-Girlfriend, in which Rachel plays the main character Rebecca Bunch. The song is really funny, and there’s a lot that Hourglassy readers can relate to, but ultimately I felt it was a ploy to captivate male viewers. That’s what happens when you watch a video out of context!

A few months later on a friend’s recommendation, my husband started watching Crazy Ex-Girlfriend. I wasn’t interested in watching with him until he observed, “You know, sometimes the star’s breasts seem really big, and other times they aren’t noticeable at all.” How could I resist sitting down to study Rebecca Bunch after that?

As a study in how to dress big boobs, Rebecca Bunch is all over the place. For any given scene, the costume designer spins a wheel, and you never know what style Rebecca is going to land on.  In fact, I’d rather have Rebecca’s hair than her wardrobe. This interview with Melina Root explains why.

Her style? She has a lot of money and doesn’t know how to express herself. She wears straight ahead business clothes in New York and when she moves they become more casual dresses and separates. She’s not stylish; she’s not a fashion plate. She has a hard time working around clothes. She always gets it a little wrong.

Instead of feeling critical of Rebecca, I relate. And I’m pretty sure any reader who has ever struggled to find her style while working to fit a big bust can also relate. Sometimes a girl wants to be Clare Underwood, but all she can find to wear is Nigella Lawson.

Since Rebecca’s style goes everywhere on the show, there’s something for everyone to love and hate. First up is the one style sold as a must-have to all busty women everywhere: wraps. Even a comedy star has to pin her wraps closed! 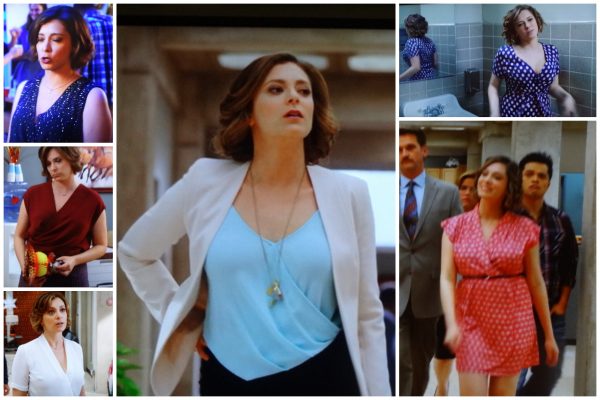 Next, a roundup of work wear options appropriate for a busty woman in a conservative office. I want to know where the costume designer found a blazer that would button over Rebecca’s chest! 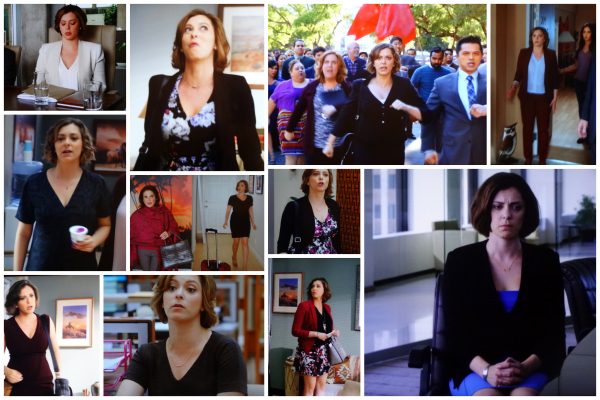 Speaking of jackets, I love the angled hem on these. My theory is that they’re lengthening without forcing her to commit to a jacket that is too long all around. (In this video she says she wears petite jackets–and that her bra size is a 32DD.) Plus, the angles give her an hourglass look on the bottom that balances her top. 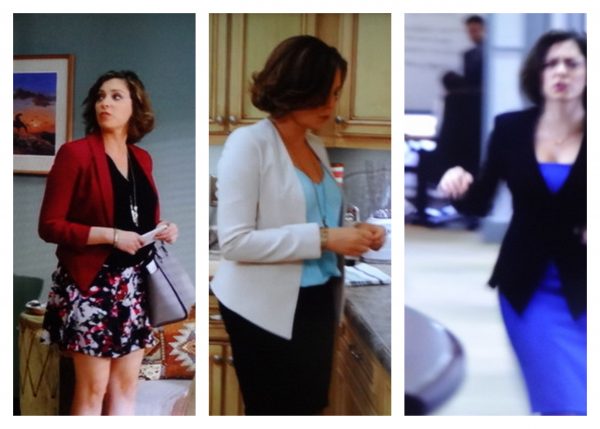 So far the styles I’ve shown you have made Rebecca’s bust seem pretty demur. However, an abundance of deep necklines are the only way the screenwriters’ jokes about her big bust would make any sense. 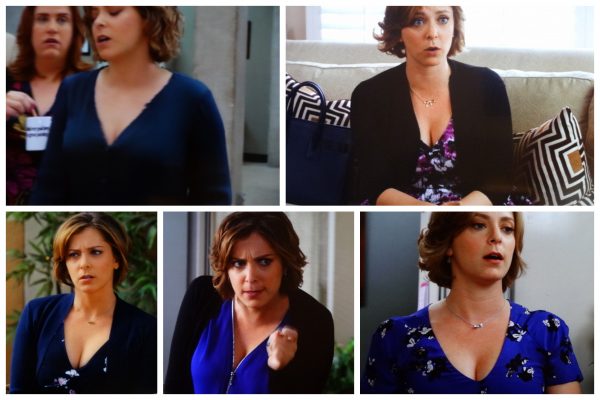 Her clubbing dresses reinforce the point. 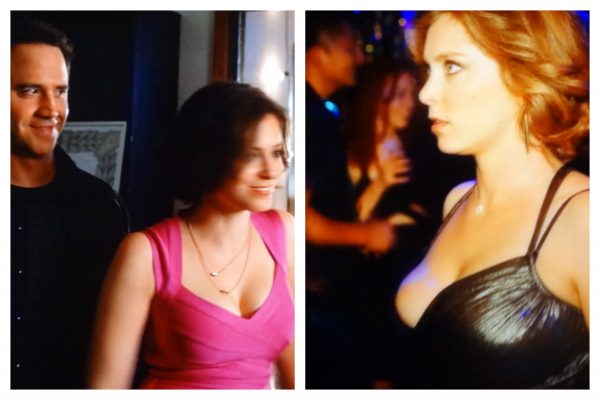 The body con dress on the left has an amazing back. It’s so gratifying that you can see her bra strap in this picture. 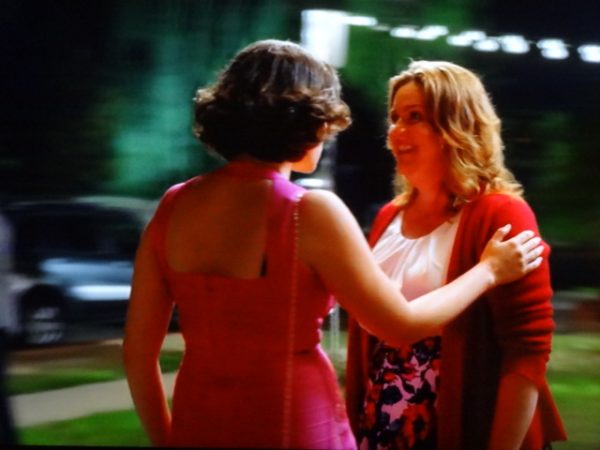 Do you notice anything else gratifying about this picture? Rebecca’s bulges. She wears this dress after her famous “The Sexy Getting Ready Song“. Seeing this and other musical numbers long before the Heavy Boobs song is why I no longer think Heavy Boobs is meant for men. Instead, it comes immediately after Rebecca tries on a wedding dress to prove to another female character that it won’t look good. The characters are talking about their bodies the way women discuss their bodies all the time, and Heavy Boobs is part of the conversation. 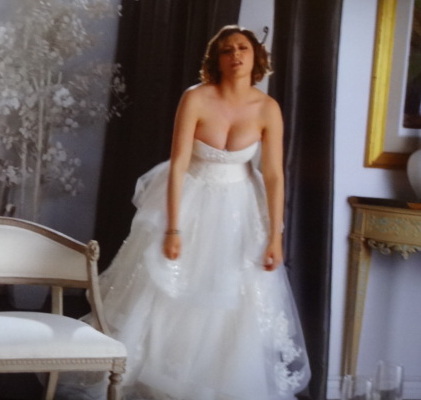 This wedding dress may not work on Rebecca, but other gowns do. Her most spectacular looks come during the musical numbers where  her imagination sweeps her away. 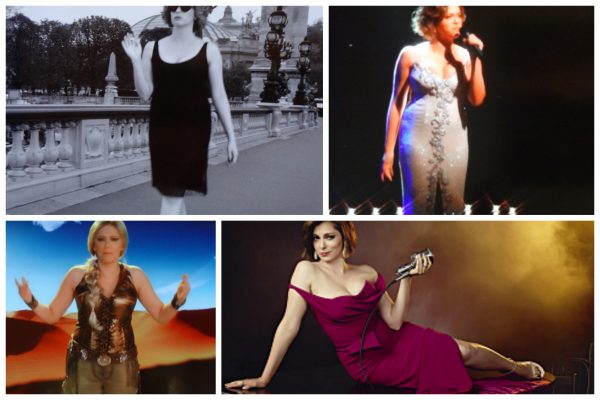 Her least spectacular looks come when her body is swept under a baggy top. 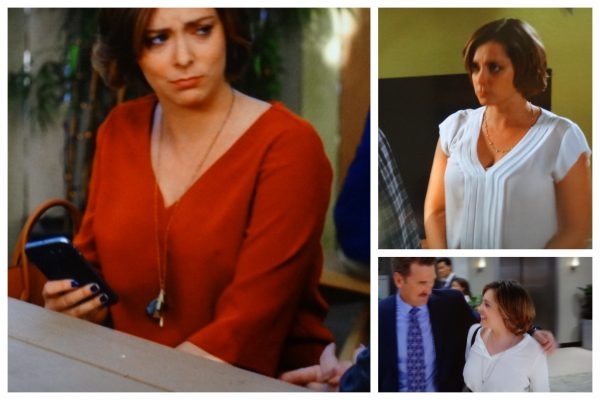 The blouses below don’t seem quite as baggy (except when she wears them untucked), and the gathers at the shoulders or neckline create enough room for the bust. She seems to wear this look pretty often. 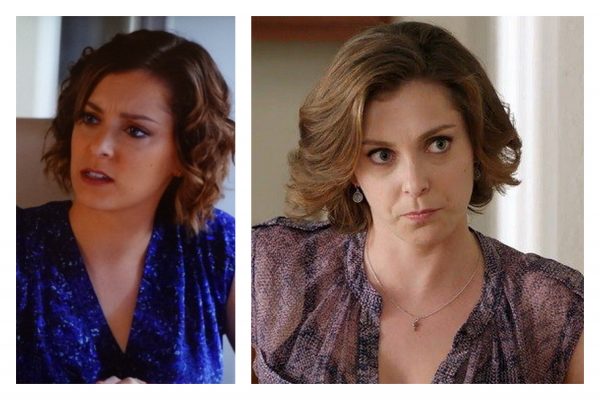 Her “hanging out” clothes include a lot of baggy shirts and a nice variety of fitted tees with scooped necklines. 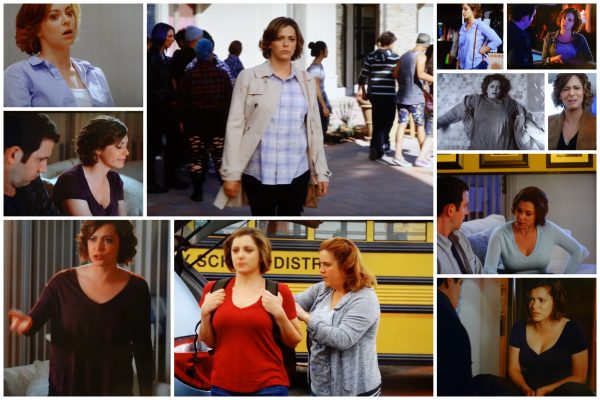 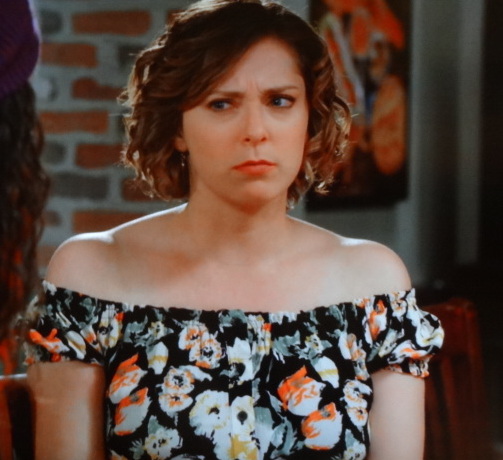 And then she’ll turn it un-trendy. 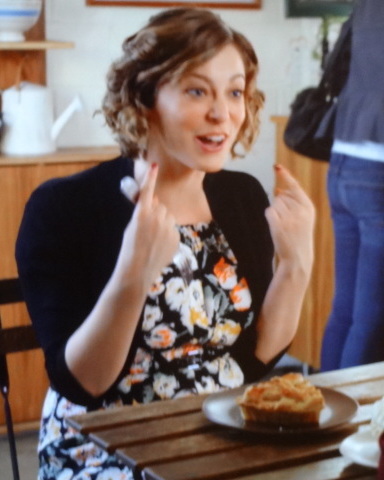 This may be my least favorite look of all. 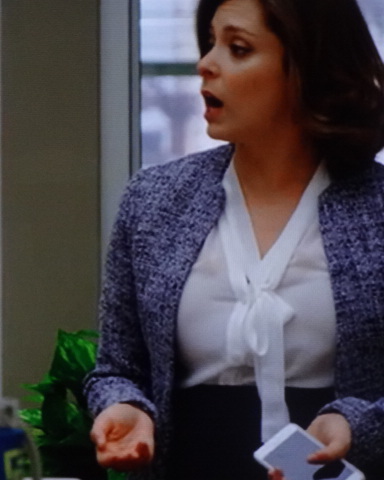 Finally, here are my FAVORITES. 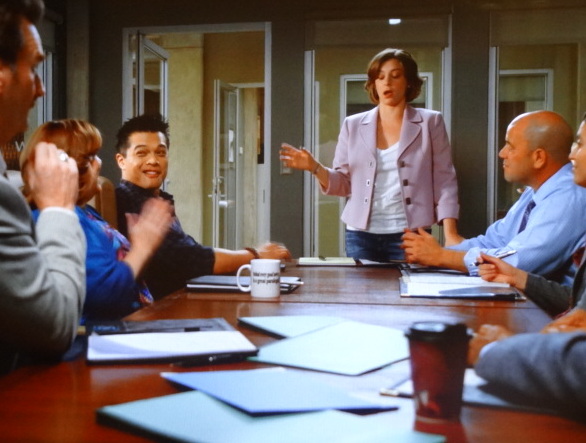 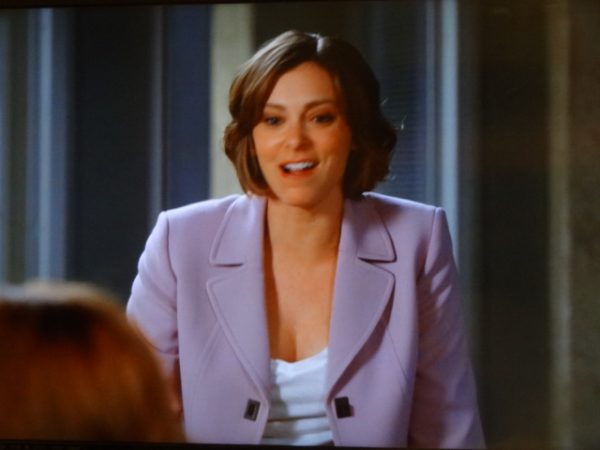 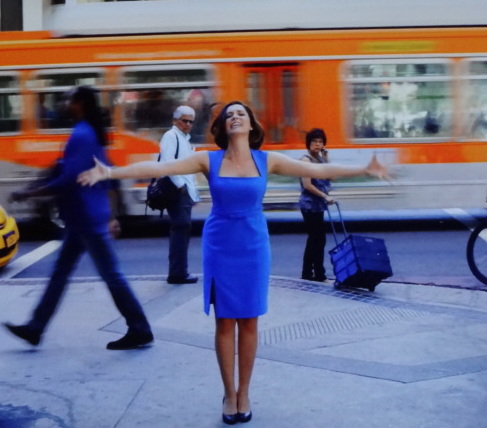 Rebecca’s clothing is the least of her worries in this show, which is why it appropriately comes across as an after-thought. Crazy Ex-Girlfriend deals with serious truths in funny, sometimes cringe-inducing ways. In the same way that we do and don’t identify with her clothing choices, we have the chance to process through her life choices with her. A friend told me recently that she is so turned off by the sexist title of this show that she refuses to watch it. If you share her opinion, please reconsider (this discussion on the subject is very helpful). There are some amazingly powerful insights in this show that I want to talk about with you!

5 Comments on Celebrity D Cup and Up List: Rachel Bloom