It’s that time of year again—the Curve Expo lingerie and swimwear trade show! Normally I write two posts about it, but this year I’m splitting it into four posts instead (plus however many Darlene writes). It’s exhausting trying to cram all the photos and news into just two posts! This week I’m sharing three brands I’ve not discussed much previously—Nubian Skin, Miss Mandalay, and Simone Perele—then the following weeks will cover Claudette, Curvy Kate, the Eveden family, Gossard, Le Mystere, Panache, Parfait, Passionata, and Tutti Rouge.

First up is Nubian Skin. Mia introduced readers to them after the February 2015 Curve show. As she mentioned, since the last Curve they’ve expanded from 30-36 B-DD up to 40 bands in the same cups. And now I’m happy to report that they’ll be adding up to size 38G in the Essential T-Shirt Bra by summer 2016.

Further, Nubian Skin has added curvy tights to their hosiery collection, offering matte 15 denier tights in sizes XL, 2X, and 3X. The tights are extra long and exceedingly stretchy, but they bounce back like a champ!

I’ve been aware of Miss Mandalay since Miss Underpinnings wrote a glowing review of their signature Amelie bras all the way back in 2013. Then I was lucky enough to pick one up used from a swap and sell group, and it fit me much the same, i.e. really well. The one I snagged features a wonderful pumpkin orange over the black lace, and I’d love to add more colors to my collection at some point. In fact, there are two new colors being released, navy blue and a stunning pale grey: 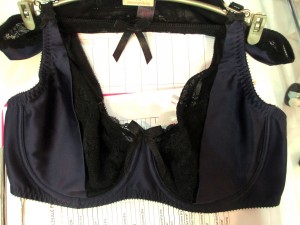 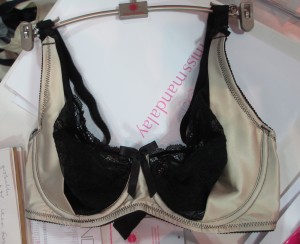 I was a fan of some of the other styles as well, including:

Finally, we come to the French brand Simone Perele. This brand was a major mystery to me up until this Curve, since at all previous shows they refused to talk to me! But this time, Darlene and I piggybacked on the appointment belonging to a retailer friend. I kept my mouth shut without asking too many questions because I didn’t want to intrude on the actual business going on, and I think Darlene will probably cover them more in depth, but there were a couple pieces that really stood out to me:

Simone Perele ranges from 30–40 B–H (French sizing, so the equivalent of a UK FF), depending on the style.

That’s it for this week! Check in next week for Gossard, Le Mystere, Passionata, and Tutti Rouge.