Another entry to my mini series on “fitting the bottom half of the hourglass,” this week I’m reviewing tights from Commando.

I discovered Commando at the Curve show this past July. They specialize in seamless underwear and hosiery, and I was excited to discover their opaque black tights with a raw-cut, no-dig waistband. I said I would be replacing my old worn-out tights with these, and that’s exactly what I did two weeks ago!

I purchased the “Ultimate Opaque” 70-denier tights, but if you need more warmth, they also come in 110 denier (the “Eclipse” tights). The 70s are completely opaque when standing and walking, but they do go a tiny bit sheer if you stretch them far when bending your knees. Still, I wear a lot of tights in the fall, and I think the 100s would be too warm so I’m perfectly fine with the 70s.

Here’s a photo of my knees on the subway when I’m sitting with them bent at a 90-degree angle. You can see how the color compares to the opaque black edge of my dress: 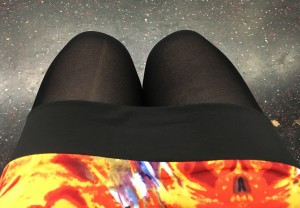 And here’s a photo of me standing around, so you can see that they’re not sheer at all when standing: 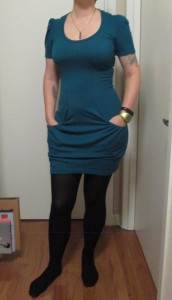 As for the no-dig waistband, it does exactly what it claims! In fact, here’s a photo of me wearing this exact same dress with a normal pair of tights. You can really see how much the old tights pinched in on the sides and stuck out at the front seam, compared to the complete lack of visible seams with the Commandos:

Additionally, here is a closeup photo of the no-dig waistband, where you can see how smooth it is: 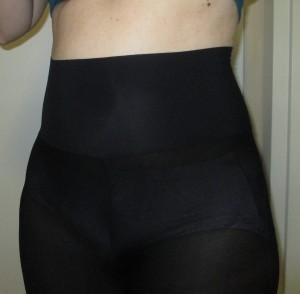 Any tiny bumps you see on my hips are my body’s shape or from my underwear, not the tights. Here’s the same photo with the brightness turned all the way up in Photoshop, so you can see where the tights stop and the waistband begins:

There is a seam up the crotch of the tights, which gives a bit of a cameltoe impression, but as you saw in my dress photos, it’s not visible under clothes. Additionally, the waistband has a center seam up the back, but it, too, is invisible. I really like how wide the waistband is and how high up it comes. It’s made of 72% nylon and 28% spandex, while the legs are 91% nylon and 9% spandex.

My one complaint is that the waistband can roll down in certain circumstances, since the edge is raw. As with every pair of tights I’ve ever worn, throughout the day gravity and my body movement conspire to pull them down just a little, and that resulted in the top of the waistband eventually shifting onto my natural waist instead of resting above it. In that position, if I bent at the right angle, my waist would cause the band to roll just a little, and then if I didn’t correct it, it would roll further the more I moved. However, if I yanked the tights back up from ankle to the waist (as one would do upon using the restroom), then the rolling stopped.

I think this would be fixed if the waistband was a double layer of fabric that was folded in half at the waist, but that would mean the seam where it attaches to the tights would be heavier, so that might present its own issues.

I purchased size Medium, which is recommended for 5’2”–5’9” and 120–150 lbs. At 5’6” and just under 150, I fall into both the Medium and the Large sizes (Large is 5’5”–6’ and 140–170 lbs). Usually I go with the bigger size when it comes to tights because I can’t stand when the legs aren’t long enough and the crotch drops, but some of the reviews on Amazon claimed these ran big. I don’t think they run big, I just think they’re well designed so as to avoid crotch-drop. So if you’re between sizes like me, I’d suggest picking the one in which you’re closer to the middle of the size range, unless you have really muscular legs that might require the bigger size (and for the record, my legs are pretty muscular. I always have to buy wide-calf boots).