Last weekend was the Curve Expo lingerie and swimwear trade show for Spring/Summer 2016 in New York. Unless otherwise noted, everything you see below will be released for sale around March–May 2016. This week I’ll cover some lesser-known brands I checked out at Curve, and next week I’ll go over the usual suspects of Claudette, Curvy Kate, Eveden, Panache, Parfait, and Tutti Rouge.

I’m just going to go in alphabetical order here, and provide some highlights of what I found, but first I have to share an overview of the trade show floor because I’m completely obsessed with the amazing teal carpeting: 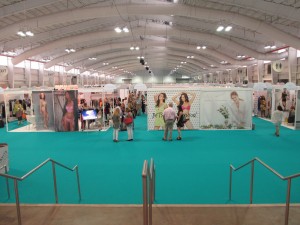 Regular readers will know that I’m strongly anti-pantyline and that I hate when underwear digs into my butt. And while I’m not much of a shapewear gal, I do like a smooth look under wiggle dresses and other body-skimming styles. I’ve reviewed a couple seamless panties in the past (read here and here), but I’m always on the lookout for even better options.

I don’t know how I’ve missed Commando at previous Curve shows. They offer a huge range of seamless underwear and other lingerie and hosiery accessories, including a great range of “nude” shades and lots of fun prints. Just look at this colorful display: 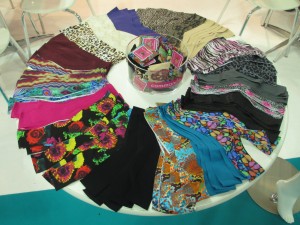 And a closeup of a print and a bedazzled skull: 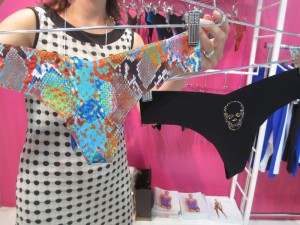 In addition to the panties, they also offer several styles of tights and panty hose in different “nude” shades, including dark brown, which I believe is usually difficult for women of color to find. What really excites my about Commando’s hosiery, though, is that it all features a patented raw-cut, no-dig waistband that doesn’t use elastic or rubber and doesn’t have a seam up the front. Check it out: 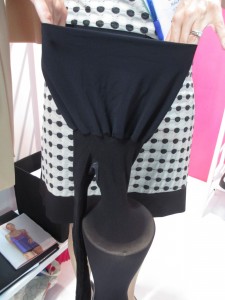 I have several ancient pairs of opaque black tights that desperately need replacing, and you bet your ass I’ll be sticking with these this fall and winter. The “Opaque Collection” comes in black, espresso, charcoal, and indigo, so I can even get a couple different colors.

Curve & Co. is a Colombian lingerie brand that does not yet have distribution in the US, but I thought they were worth highlighting since it’s supposed to be really difficult to find curve-friendly bras in Latin and South America. All their products are designed and manufactured in Colombia, a laudable feature.

Unfortunately, while C&Co’s panties have an impressive size range (M – 4XL), the bras are not that different from any other plus-size brand (at least for the US), covering 36A–42DD. However, their rep told me they already had one client ask them to make up to 46H, and that it would take only up to 30 days to develop a current non-padded design in that size.

One final note before I show you the photos, the retail price for C&Co is quite reasonable at $40–$55 per bra. Interestingly, part of the reason prices can be kept so low is because of the US-Colombia Trade Promotion Agreement (CTPA), which means there are no import or export tariffs between our two countries. If you want to see this brand stateside, start calling your favorite stores and requesting it! You can find more information at CurveAndCo.com.

I’ve only just barely written about Gossard before (though they are one of my core bras). I’d really like to own more of their bras, but most of the time I find the designs a little lacking. However, there are a few that caught my eye for the upcoming season.

I just have two quick photos to share of this new Australian brand. I love their name and style, but they only come in core sizes. However, I just have to share these panties with a functional zipper up the back:

…And this stunning emerald green:

Finally, we come to one of my favorite brands, even though it only starts at 32 band and stops at a European F-cup, which is a mere UK E or American DDD. As far as I know, Marlies Dekkers are the ones who first created and certainly the ones who popularized the harness-style bra that has been so imitated in the last couple years. I discovered them at my very first trip to Curve in February 2012 and have been lusting after the designs ever since. This year was no different, and quite possibly included the most exciting, and certainly the most experimental, things they’ve ever done!

The new collection is inspired by Lagertha, the Viking shieldmaiden and wife of legendary Norse ruler Ragnar Lothbrok. In the lookbook, Marlies Dekkers herself describes Lagertha as a “free-spirited,” “independent” “warrior and seafarer” who never settled. I absolutely love this perspective, and I think the bold, confident lingerie absolutely reflects it.

Now let’s get to the photo dump!! 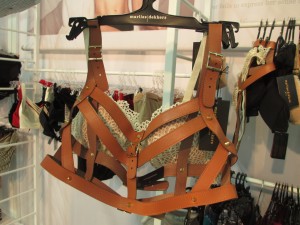 The “Earl Lagertha” pieces are totally unique. They include this padded pushup bra, a padded balcony bra, padded plunge body, and thong and matching suspender. The lacey bras and body all come with the removable faux leather, studded harness, which I’m obsessed with. The suspender bottom is sold separately, and I only wish the bra harness was too! If I want the harness set, I’ll have to take it with a bra that doesn’t really fit. I just want to wear this harness every day. I mean, look at the model photo!!

Next up is the “Lagertha & Ragnar” bra, which I at first thought was hilarious, but then appreciated more after reading of its inspiration­—Lagertha’s love for her husband and king, “her only equal in bed, battlefield, and ambition.” Bad. Ass.

The “Femme Fatale” bra is insanely padded, by the way. But there’s also the similar “Calamity Jane” in dark blue denim, which is less padded. Both are delivering in January: 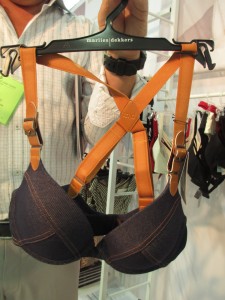 Another menswear-inspired piece is the continuity “Gloria” collection, which includes three bras, two panties, a waspie garter belt, and a thong body. My favorite piece is definitely the padded plunge balcony bra: 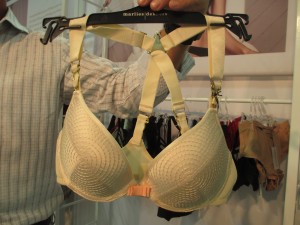 I absolutely adore this throwback to vintage lingerie. The circular seams are reminiscent of bullet bras from the ’50s and the straps look like garter clips. Delivery in January.

One thing MD is bringing out in full force this season is harness bras with beading, plastic and metal accents, and charms integrated into the harness part. One of the boldest examples of this is the “Kunoichi” (the term for a female ninja) padded pushup bra, whose harness piece is actually a halter and is held on with big plastic pieces and neon ribbons.

Finally, let’s bring things back to the original, perfect harness bra, whose continuity colors include white, black, and a stunning saturated red: 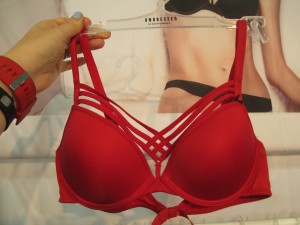 The “Dame de Paris” is the style that started it all! Even with all the brands offering harness bras now, I still think this is the most perfect representation of it. I would die for a plunge black one, but I’d have to sister size three times from UK 28G to 34E in order to fit into the cups. I would have to butcher the band to make it fit, and I just can’t see spending $99 on a bra if that’s what I plan to do to it.

1 Comment on Off the Rack ~ Spring/Summer 2016 Curve Coverage Part I: New Faces