First up is a second look at Exclusively Kristen. When I introduced you to Exclusively Kristen in February, I didn’t have a lot to say. Then I had coffee with Kristen in October and learned some important details that I think you should know. The biggest revelation is that even though her website says her button front shirts best fit UK cup sizes DD-F, they’re actually more generous. In the photo below, Kristen is wearing a size 10 shirt, yet underneath she’s wearing a 32G bra. She measures 29″ in the waist and 39″ in the bust. Ideally, she’d like to wear a size 8 shirt in her own brand, but that will happen when she expands her bust size range. Frankly, I think she looks great in the size 10.

Kristen’s spaghetti-strap tank top is the surprise bestseller for her company. Since the built-in shelf bra doesn’t offer any support, I naively wondered about its appeal.  I should have known from her website, but Kristen patiently set me straight: 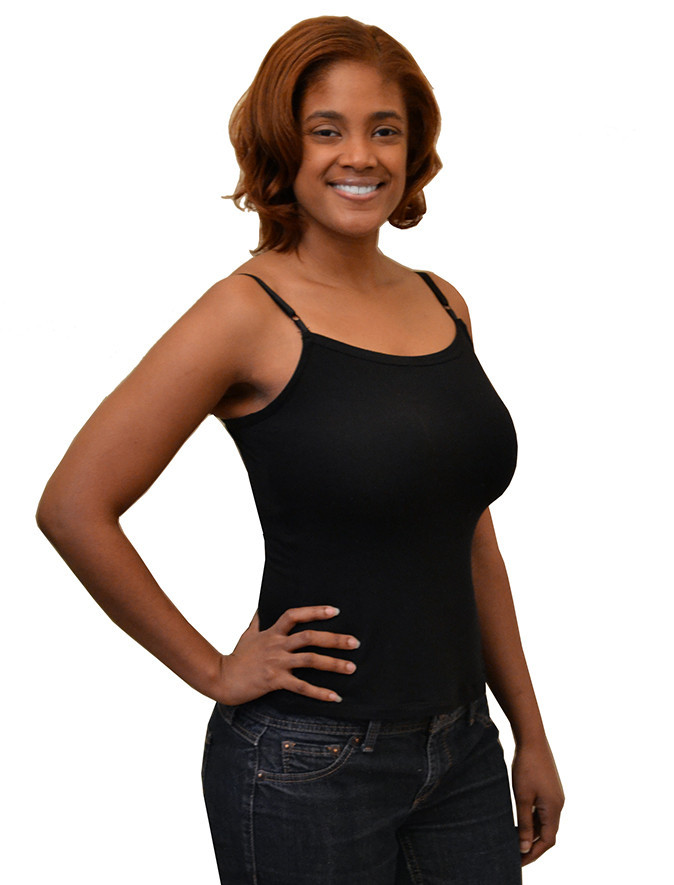 When we got together, Kristen was wearing her Urban Gypsy top and looked amazing in it. However, if you think that Kristen is one of only a few women who can pull off the Urban Gypsy top, you’re probably right–which explains why it’s on clearance. It may not be everyone’s favorite Exclusively Kristen piece, but at least she learned from the experience of producing it. As Kristen told me, “I think I played it too safe in the beginning because I assumed that busty ladies would more . . . appreciate function but now I see that style is more important.”

We had a great time daydreaming about the styles she will produce in upcoming seasons. Kristen is an amazing woman who is working full time, finishing a dissertation, AND starting her own company. She’s also a world traveler. I would love to see the influences of that travel in some of her clothing in the future.

I just added a Canadian newcomer to our Clothing for Big Busts page, and oh how I admire the clever name that founder Melanie Love has given her company! I’ll be writing more about this new brand soon, but here are the pieces that have caught my eye.