It’s been just disgustingly hot in New York this week. With my freelance work, I spend two days every week going around Manhattan and Brooklyn running errands, stopping at various clients’ houses, etc. There are subways and buses, but I still end up walking a lot (and the underground subway platforms are usually hotter than it is outside thanks to a complete lack of air conditioning, fans, or even the least bit of ventilation in some cases), which means I need to dress as cool and comfortable as possible.

Ironically, the last thing I want to be wearing on a 90+ (Fahrenheit) day is a strapless bra. The ones I own (Freya Deco, Le Mystere Soiree Bustier) are molded and slightly padded, and thus quite warm. Further, once I start sweating, they basically turn into sponges that hold a lot of sweat against my body. Ugh, not pleasant at all.

Rather, the bras I find most cool are all-over sheer mesh, like the Ewa Michalak BM style or the Claudette Dessous. Of course, these bras also have brightly colored straps that are difficult to hide. But this week I was inspired by one of my colleagues and a random girl I spotted (in the subway, no less!). Both were wearing a colored bra with visible straps, but both of them chose a bra that set off their strappy top in such a way that it looked intentional and did not look at all sloppy.

So here are my suggestions for ways to wear visible bra straps in the summer. Of course, this requires a bra collection that matches your wardrobe to a certain extent. I prefer to avoid white, black, or nude straps because, well, I think they’re just plain ugly! And there’s really no hiding the fact that those are bras. I just don’t think it’s possible to have these strap colors sticking out and still look intentional or fashionable.

For an example of how to do it right, here’s my sneaky shot of the subway girl:

As you can see, her bra, dress, and accessories are all earth-toned. The dress was a warm ivory and the bra a beige-y army green shade. I think it really helps that the bra band fits properly and is not riding up. Further, it had a thin band and thin straps that perfectly lined up with the dress straps. Finally, the horizontal string across the dress runs perfectly parallel to the bra band. I have no idea if this girl planned it so specifically, but to me this looks edgy and cool.

Since most of us probably don’t own skimpy bras that so perfectly pair with our clothing, I’d say the next best thing is to pair your bra with a top or dress that just matches in color, such as this pink-trimmed tank with a bra that has hot pink straps in almost the same shade: 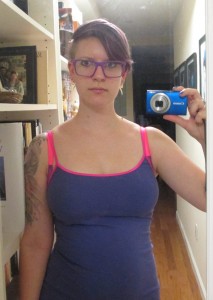 Unless you’re looking really closely, I think the bra and the shirt blend into each other and just look like a shirt.

If you don’t have a bra that matches so closely, I think you can still get away with one in a similar color family. Here, for example, is a bra with neon lime straps with a tank that has minty green straps: 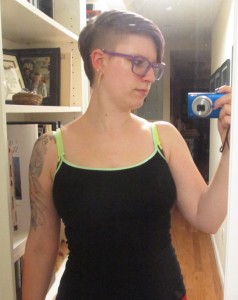 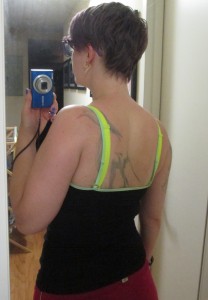 I try to avoid having any part of the bra other than the straps stick out.

As for my colleague, I don’t have a photo, but she was wearing a strappy racerback tank with a strappy racerback bra, only the two backs didn’t line up. However, they were both different shades of orange, so they were complementary, and the two sets of straps looked sporty and modern. Here’s my attempt at a similar look. I’m wearing the Passionata Starlight, which actually does stay hidden under every racerback tank I own, so I just paired it with the same pink and purple top as above:

Finally, what if you have colorful bras but no shirts to match? This requires a little more bravery, but in that case I’d recommend going all out with the bra! Pick a basic and neutral solid-colored top and the brightest bra you own. I’m even on board with letting some of the cups stick out if they’re colorful too. Here’s a black tank with my neon lime straps sticking out, and the camouflage print of this Dessous bra making a little appearance too: 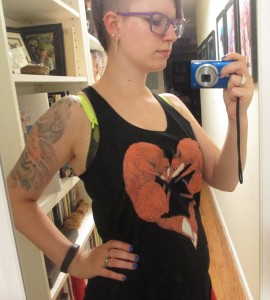 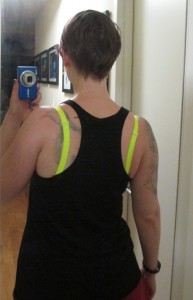 I think the only way to “pull off” visible bra straps is to make it seem intentional. There’s no way I could have accidentally chosen such a bright bra to wear with this black shirt. But if I was wearing a beige bra, it would seem like I was trying to hide the bra against my skin (and failing). Black would seem like I was trying to get it to blend in with my top (again failing). And white…well no one wants to see our dirty, discolored white bra straps (you know they never stay white for long!).