For my third bikini this month, I’m reviewing Fantasie’s “Lombok” full-cup halter top and scarf-tie briefs. I had the hardest time picking a swimsuit from Eveden. As you’ll recall from our trip to their showroom a few months ago, I was in love with oodles of designs from Freya.

I really wanted the watermelon or the hot pink with neon yellow polka dots. But in both cases, the bikini top style I liked best was the halter, of which I already own two and even covered in my Freya swim roundup of 2013 (the Coconut Grove set). Ultimately I ended up going with a much more subdued suit from Fantasie, because I thought it would be more valuable to both readers and to Eveden to have me assess something new.

Disclosure: This bikini was received as a review sample. All opinions are my own and based entirely on my experience.

I’ve long been intrigued by Fantasie’s full-cup bikini style (which Darlene reviewed earlier this week). Even though it’s billed as “full cup,” it really doesn’t look like an excessive amount of coverage to me, and I really like the gathering at the base of the cup. Plus, Fantasie releases lots of new colors and prints in this style every season.

I almost overlooked the Lombok, but once I realized it was the same full-cup shape but with a halter instead of bra straps, I was hooked. I was also a huge fan of the scarf-tie bottoms, since they have that cute side-tie look, but with more coverage than all my Freya bottoms. The gold beads on the straps and the ties give it just a little more visual interest as well.

So let’s start with the manufacturer’s photo, followed by me: 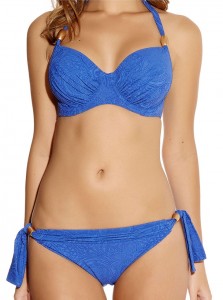 Note that the color is more accurate in the manufacturer’s image. Since I find Fantasie to run a smidge larger in the cups than Freya, I went with 30FF instead of sizing up one cup to 30G, and I got the bottoms in Medium since they seemed to offer more coverage and can be adjusted at the sides. I think both sizes are just right, so I would say Fantasie swimwear fits true to size (at least in the full-cup style).

This bikini is so freaking comfortable! The fabric is ultra-soft and stretchy. It almost feels like I’m wearing nothing at all, especially on the bottom.

The top is lined with a double-layer of peach mesh, and the bottoms with a single layer of blue swim lining with a double-layer in the crotch. The gold beads are lightweight plastic, and they can slide around into your position of choice or be removed completely.

Since I wasn’t sure I’d get a chance to swim in the bikini this week, I wore the top all day again, including on my bike-ride to work and an extended ride home as I ran errands. I definitely had not-so-comfortable bounce when I went over big bumps on my bike, but otherwise the support is good. The lift, on the other hand, leaves a little to be desired. The shape is a bit droopy, I suspect because the fabric is so stretchy and not lined with foam for shaping. I’m not sure if there’s any remedy for this without adding foam, but it’s really only noticeable in profile so I don’t much care. 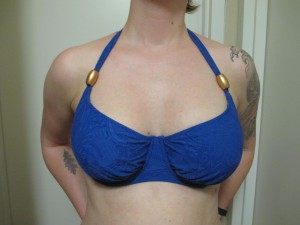 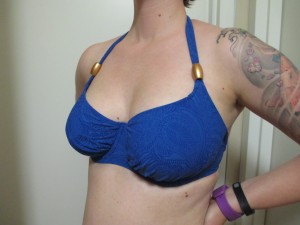 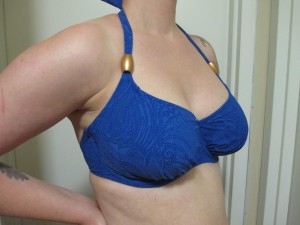 The gore tacks perfectly, and while the average-width wires could stand to be a little narrower for me, they work fine. Thanks to the stretchiness of the fabric, I had no “orange-in-a-glass” effect, so I think this top would suit a wide range of shapes. Additionally, it has super subtle side slings to keep your breasts forward. The slings are so well hidden that I didn’t even realize their existence until I inspected the top closely, but it definitely keeps you from getting an east-west shape:

Two final negative comments: As you’ll see in the back photo below, the band is very thin. Although the cups are the right volume, the wires an acceptable width, and the gore tacks, the wires tend to shift down my ribs a little throughout the day. I found myself pushing them back up several times. I think this is due to the thinness of the band, and that if it were a little thicker it would anchor to my ribcage better. Conventional straps instead of a halter might also help. Luckily, the Lombok comes in a padded balcony top as well, so you can get both a wider band and regular adjustable bra straps if you prefer (though it doesn’t have the gold beads).

Finally, although halter necks generally don’t bother my neck in terms of strain or weight, the thickness of the straps creates a big, dense knot, which does dig into my neck. It helps to tie it slightly off center to avoid having it jammed against my spine, but I can still feel it significantly.

As for the bottoms, let’s take a look:

Love it! This is the exact amount of coverage I prefer—enough that I don’t feel on display, but not so huge that I get saggy granny-butt. It also doesn’t cut in at the muffin top area or my buttcheeks. And again I really like the look of the scarf ties.

Luckily, I did end up getting a chance to swim in the suit, after all! This past weekend was my sister’s bachelorette festivities in Newport, Rhode Island, and obviously while there the group had to go to the beach. The temperature was pretty cool, so I didn’t swim a whole lot, but I made sure to go under at least once and paddle around a bit. There were no waves this time, so I couldn’t assess its staying power in a more active situation, but I will say that I was originally concerned the stretchiness of the top might lead it to become more saggy when wet. However, it didn’t move and maintained the exact same shape as it had while dry. There was some visible nipple, but I doubt that’s avoidable without padding in the cups. I also managed to pinch my skin a little with the beads on the halter as I was reapplying sunscreen, so that’s something minor to be aware of. 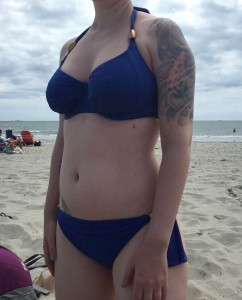 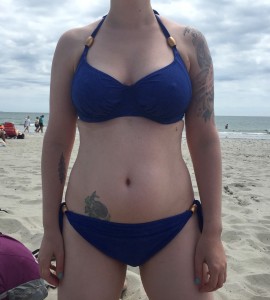 This set is definitely more conservatively styled than I usually go for, but I foresee it getting a lot of use due to its practicality and amazing comfort (aside from the neck knot).