I’ve never really cared that much about the tv shows that give style advice but do sometimes watch them. Yesterday there wasn’t much on, so I happened to catch a glimpse of Trinny & Susannah in Denmark. A lovely blonde, green-grey-eyed female law student was stuck in a rut wearing hoodies and jeans but said that there was a peacock inside her that she wanted that to show. So she thought that the only way to stand out would be by using bold colors. I personally am inclined to think so, too, although the colors reflect my mood as well.

But Susannah actually put her in this golden dress first. The student said it looked too bland, but Susannah said that pale can be beautiful and glowing.

To prove her point she wanted them to take a photo of her in a bright red dress.

I still was with this woman’s thinking that color looks amazing. I suppose it’s something when you are very pale and have such icy colored eyes as well that you don’t think that anything pale looks nice. But when they compared these two shots of her on Susannah’s phone I did start to get her point.

How they ended up styling her was grey, but interesting grey.

Susannah made a point “Now YOU are the most interesting part of this outfit and it makes your eyes really pop out.” When she had her hair and makeup done, I finally agreed!

This all then ties into a what to wear situation on the same day. I wore a white knitted Calvin Klein dress with black tights and did not want to add a navy trench coat on the outfit, especially since I was wearing leopard print ballerinas.

Then I thought of the Pepperberry full skirt trench that I’ve sort of been eyeing for a long time. I knew it was on sale, but only now after realizing how grey can really accentuate my icy eyes and pale skin in a complimentary way did I finally buy it. I’ve just thought that grey = boring. 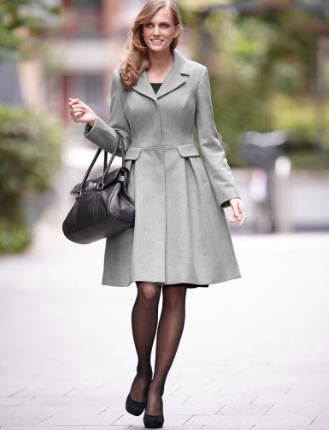 Now I’m just a little unsure of the fit as I’ve usually had to take 16RC in coats because of shoulder room, but there was none left. I took a risk with 14SC then, as I am smaller now the last time I shopped with them so fingers crossed. Here’s to hoping it fits. Then I’ll have a black wool coat and navy and grey trench coats, so I should be all set for this autumn.