If you’re reading this, then you already know how wonderful Hourglassy readers are! Enjoy today’s encouraging guest post from longtime reader and first-time writer Veera!

Hi, my name is Veera, and I’m a 51 year old mom of two teenage daughters. I work in a corporate environment and spend my vacations traveling to visit my family in Finland. (I know, another person on this blog has a connection with Finland!) I also knit, and although I haven’t made that many garments, my next project is a fitted sweater or top with darts.

I’m a regular reader of Hourglassy, and I also had the good fortune of attending last year’s Busty Swap. [Note from Darlene: And she’s registered to attend this year’s swap. Have you registered yet?!] After being fitted into a 32E 4-5 years ago, I’ve mostly worn a 30F/FF in the last few years, although I’m shrinking into a 28FF/G now.

I made my first order from Urkye in January, and decided to order two dresses. I ordered both in size 34 oo/000.  I usually wear a 4/6 in standard dresses.

This is a discontinued “tubowa” fabric, but they still carry another tubowa print dress, and six other solid tubowa dresses.  For the record, I’m wearing a 30F Deco in all of these photographs.  The fabric is very thin, which will be great when it’s 95 degrees here in NYC, but as you can see, is not forgiving!  I’m wearing Jockey shorties, but you can still see every line and bump, although the pattern does help camouflage them a little .  The neckline has excellent coverage, though, so I may wear this to work anyway on a very hot day, but probably on “casual Friday” with a cardigan.  I tried on an unpadded bra, and I actually preferred the rounder Deco look–it definitely needed the larger cup volume.  This will definitely get wear in the hot summer, but unless/until I drop a few more pounds or get better shapewear, it’ll stay on the hanger for the time being.

The second dress I got is the well-reviewed Mala. 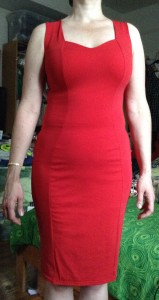 This fabric is thicker than the tubowa dress.  Hmm, maybe I should have gotten the 360/oo, but I tend to want clothes that are fitted I can’t stand bagginess!  With different shapewear I think this would be fine.  An unpadded bra looked fine in this, too. It didn’t need the larger cup volume, but I’m sure this dress could handle another few cup sizes.

The next four dresses illustrate the heading of this post.  In the course of two days, I bought four dresses from Banana Republic a few weeks ago. I bought them in four different sizes: 2, 4, 6, and 8!  I went to the store to try on some of their special “Marimekko” dresses, a collaboration with the well-known Finnish design company.

This dress, the “Kivet” dress, was only available at that store in a 4 or smaller.  I wasn’t sure how it would look, but I decided to try it on anyway. It fit! 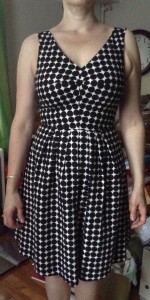 It’s a little snug, but zipped up easily and handled my boobs.  The dress is lined.  I usually wear it with an unpadded bra, but there was enough room for the Deco, so I think it could handle another cup or two up.  I do get a little armpit spillage on the left side, but that happens sometimes as women get older, and if I wear a cardigan, it’s invisible. The fabric is a little heavier, but it’s been perfectly comfortable so far in 70-80 degree weather. 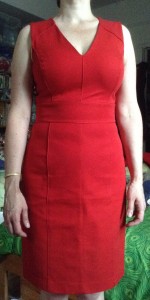 Online reviews revealed that it runs small in the bust, so I think a 6 would actually not have fit in the bust. The fabric is a heavy spandexy cotton.  It’s unlined, but because it’s a little big it’s very forgiving.  It’s a little big in the waist, and the rear isn’t quite as flattering as it could be. My rear is a little lower than where the darts are placed, and I’m considering having it altered to take in the waist and lengthen the rear darts. However, because my bust fills out the top half of the dress, the rest of the dress looks okay.  If it looks baggier when I’m a few pounds lighter, I’ll go ahead with my alteration plans.

I was so happy with the 40% discount, I went to a different Banana Republic the next day. Unfortunately there wasn’t any discount, but I still bought two more dresses!  The first one was another Marimekko style, the Tamara.  The largest one they had was a size 2.  Since I had no other choice, I took one, but really, I was thinking it was ridiculous, there was no way it would fit.  Boy was I wrong! 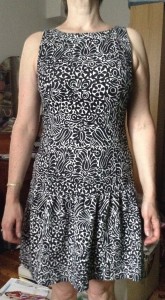 The fabric is not as heavy as the red Sloan dress, but it’s heavier than the Mala (it’s also unlined).  I didn’t try any other sizes on, so I’m not sure if this was mis-sized or just runs really big. The fabric stretches enough to fit my boobs, but isn’t tight around my waist and hips, so n0 lumps and bumps are visible.  Since my Change brand bra showed in the armpit, a Freya was a better choice.  As long as the bra doesn’t show under my arm, so far all bra styles have worked with this dress.

The last dress was the only one where I had multiple sizes to try on and compare.  I tried on a 4 and a 6, but ended up with the 6. 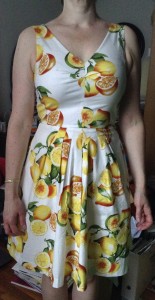 It’s the exact same style as the Kivet dress, a fit and flare style.  The fabric is thinner than the Kivet.  By the way, those lines are the result of my turning a bit, they aren’t there normally!  As with the Kivet dress, the 4 zipped up and my boobs fit, but then I decided to try on the 6.  I decided that there was  just a little more room for my boobs, and it doesn’t look big on me, so I chose to get the 6.

So I ended up with a 2, a 4, a 6 and an 8, all from the same company!  I would never have bothered trying on a 2, and I might have given up on the red Sloan dress if the 6 were available and it hadn’t fit. I hope this review has shown how important it is try clothes on, and to try on items in multiple sizes or take a chance and go up or down in size.  You never know!