I’m a little late to the party on this one, but I finally tried the Panache Sports Bra recently. I like to have three sports bras at a time because my goal is to do serious exercise three days a week and I don’t want to have to do laundry after every bike ride or trip to the gym. I already owned two Shock Absorber bras that I love, but the fact of the matter is that compression sports bras exacerbate under-boob (and between-boob) sweat so much that I really wanted to try something else. And I’m so glad I did!

I still wouldn’t give up my SA’s completely because I think they do a slightly better job at minimizing bounce, particularly for running on the treadmill, which I do a lot of since my apartment building has a gym in it. But the Panache bra is so cool looking and so comfy that it’s also going to serve a purpose as a tee shirt bra for days when I want to be really strapped down. I imagine it’ll be perfect for activities that include a lot of movement but not actually that much exercise (like riding roller coasters, horseback riding, or going zip lining, because, you know, I do those things so often).

What makes the Panache Sport so comfortable? The padded straps and the silicone-encased underwire are the big reasons. But the padded triple hook-and-eye also helps, as does the moisture-wicking fabric, the fact that the straps sit farther in and don’t rub my armpits, and the soft elastic lining the band that doesn’t bite in. This thing is also straight-up cool-looking. When my fiancÃ© first saw me in it, he said it looked like something from the future. 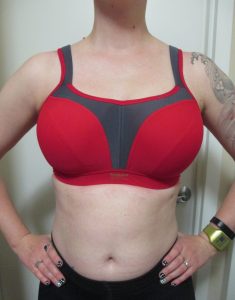 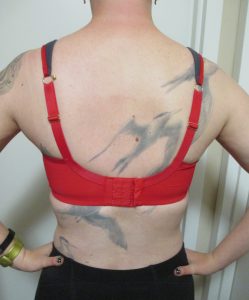 One thing that was a bit of a failure for me is the J-hook on the straps, which lets you turn the bra into a racerback. Normally I’m a sucker for this feature because so often bra straps are too wide-set for me and this completely fixes the issue. I even found it easy to hook and unhook the J all by myself with the bra on. It’s high up enough on the straps that I can reach it by bringing my elbows up next to my ears and bending my arms backward toward my spine.

However, with the hook being placed so close to the neck, I feel choked by the straps when I use it. I also find that the top edge of the band cuts in more when using the J, which is a little uncomfortable and creates phantom back fat. Here’s a photo of the front when the J-hook is closed:

As for shape, I think it speaks for itself–totally round, as if I were wearing a Freya Deco. Maybe a little east-west, but nothing major. The seams show through clothes a little.

It’s a little hard to tell if the bra actually fits correctly since the outer layer of fabric camouflages what’s going on in the bra’s interior. This was what made me so hesitant to try the bra. Panache bras are not my shape. They’re far too shallow for me with too-wide wires. So I was nervous the Sport would be the same way.

I first tried size 30FF (instead of my usual 28G) because I read that the band runs tight. The band felt good, but the cups were visibly too small. There was side boob and cleavage and I was obviously not being fully encased.

This is key. I was really disappointed at this point by what appeared to be a lot of bouncing. Ordinarily with sports bras, a smaller cup means you’ll be smushed more and see less bounce. But with this encasement style, you really need to be totally contained. When I went up to a 30G, there was much less compression but also much less bounce.

I still wonder how well the cup is matching my boob shape, but when I lay the bra out, it looks like there’s only a slight amount of foldover above the wire so I guess it’s not too shallow. There is something magical about this bra that it manages to work for so many different breast shapes. 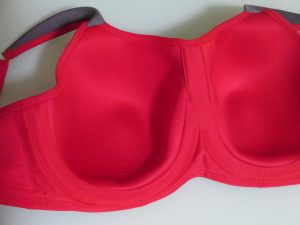 The real test, though, is actual exercise in the garment. Like I said before, I can still see some bounce when I’m doing more straight up-and-down movement like jumping rope or running on the treadmill. But for riding my bike and hiking, it is superb. I feel like I’m being held in place and not moving at all.

Last weekend the fiance and I did a weekend at Bear Mountain in southern NY, where we hiked up to the peak of the mountain, including some areas that were nothing but 45-degree sheer rock face, and I felt great. My boobs were totally out of the way and by the time I took the bra off, I could see marks on the outer layer of fabric where the sweat had been brought to the surface and dried. My skin was totally dry beneath.

I even continued wearing the bra all weekend because I had a spot where the underwire of a brand new bra had rubbed me nearly raw, and the Sport was the most comfortable solution.